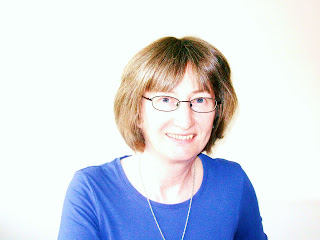 Today we have someone well known to those of you who read Writing Magazine. So tell us, Margaret, how did you get started in this business?
I've been writing for a long time. I started when my daughters were babies, and I have a five-year-old grandson now. I used to sit at the kitchen table writing short stories for women's magazines on A4 notepads while the children scribbled in the margins of the pages and dunked my biros in their orange juice, demanding to know if the story was about a fairy or a pony, and if not why not?

To plot or not to plot? How much of a planner are you?
When I write short stories, I don't plan anything. I ask my characters where they want to go, and then I follow them. But I do plan novels, trying to look ahead to see what might happen, and how the big problem I've given my heroine is going to be resolved.

Where is your favourite place to work?
I'm superstitiously attached to a Victorian desk I bought thirty years ago and at which I wrote my first published novel on a Smith Corona typewriter. We'll gloss over the fact that I've written several unpublishable turkeys at the same desk.

How do you develop your characters? In historicals, how do you keep them in period yet sympathetic to readers?
I have to like and be interested in my central characters, so I don't write about people I probably wouldn't want to know in real life. I'm not interested in sport, so this means sportsmen and women are out, as are captains of industry and anyone who knows how to make a lot of money, because I don't understand high finance. Or even low finance. But I have great respect for physical and moral courage. My good guys are almost always brave. They're people who feel the fear and do it anyway.

I build my characters layer by layer, letting them surprise me and gradually reveal themselves. I suppose I treat them like I treated my children - I try to identify their strengths and weaknesses, and to build on their strengths.

As a historical novelist, I can't always have my characters behaving in the way real people might have done a hundred or whatever years ago. In my novels, the good guys don't flog their children, beat their wives, think going to see a public execution would make a great day out, or feel it's okay for the children of the poor to starve to death because that's all part of some vast eternal plan.

Do you enjoy writing sequels or series? If so, what is the special appeal for you?
I've written two historical trilogies and one two-volume story, and I think this is because once I get going on a story I find it hard to stop. Someone has a baby - what happens to that baby when it grows up? Someone else did something very wicked - are they going to be punished?

My novel The Silver Locket is a story set during WWI and was originally intended to be a one-off, ending when the hero married the heroine and they both lived happily ever after. But at the end of the story they adopted a child, and I found I just had to tell her story. So I wrote The Golden Chain, which is Daisy's story. At the end of The Golden Chain, Daisy's horrible little twin brothers are shaping up to become quite attractive young men, so they need to tell their story too.

In what way has the RNA helped you or your career?
If I'd never joined the RNA I'd never have become a published novelist - it's that simple. I've made so many friends, and met so many people who have generously given me good advice, rejoiced with me when things are going well, and bucked me up when things are going badly, in literature and in life. Also, the RNA gave me permission to be the writer I was meant to be. I did an English degree at London University, and sort of got the impression that if I couldn't be a great writer, there was no point in trying to be any sort of writer. The RNA assured me that writing stories which would hopefully entertain a few like-minded readers was worthwhile. I didn't have to try to change the world, or die of consumption when I was 25!

Do you enjoy research, and how do you set about it?
I love doing research, and I'm sure I spend far too long on it, rummaging around in the cellars of history and finding out all kinds of things I don't actually need to know for one particular story. As well as reading books, records, letters, and surfing the net for information, I like doing practical things and visiting the places where the events in my story happen. I'm interested in the history of the industrial revolution, and I enjoy wandering around the Black Country and South Wales, where it all got going. When I was writing a novel with an archaeological background, I got involved in an excavation.

I love the cover for your latest book. Tell us how you got the idea for it. 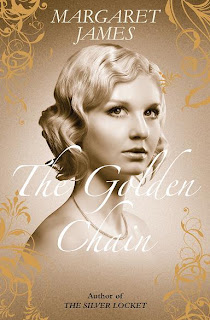 The Golden Chain is a sequel to The Silver Locket, both published by new independent Choc Lit. These two novels are radical reworkings of hardbacks published by Robert Hale some time ago.

In The Golden Chain, my heroine Daisy unconsciously follows in her unknown birth mother's footsteps, making a career on the stage. But she's also drawn back to her adoptive parents, who have a very different lifestyle in the Dorset countryside. Just to make matters a bit more complicated, Daisy falls in love with a cousin of her father's worst enemy, and then with a man who is even more unsuitable. She has a lot of decisions and choices to make, often makes the wrong ones, and she's quite good at breaking promises, too. Since this is romantic fiction, Daisy ends up in the place she wants to be, but not until she's done a lot of growing up.

What is the hardest part of the writing process for you?
Oh, that's easy - writing a first draft. I've got the road map, I've got the characters, I know roughly where they are going, but what about the journey? What if everyone gets bored and decides they want to go home? What if I realise I can't stand my heroine and don't love (or even like) my hero any more? It's happened, and when it does it induces three o'clock in the morning panics and much wailing. I hate having to abandon a story, but sometimes I just have to cut my losses, accept it's never going to get anywhere, and stick it somewhere almost inaccessible on my hard drive. I never throw anything away. I'm an eternal optimist, so I always feel I might, I just might, work out what do with those people one day. But when I think of the months and years of my life I've wasted writing stories that just don't work, when I could have been doing something absolutely fascinating like mucking out the utility room or working in B&Q, I could cry.

What advice would you give a new writer?
I can't think of anything more useful than the advice given by Jenny Haddon in a talk several years ago, which was - choose your rut carefully, because you'll probably be in it for a very long time. Although I've written published contemporary and suspense fiction, I've always chosen to write mainly historical fiction, which has turned out to be the ideal rut for me.

Also, I'd say - don't expect it to get easier, because it doesn't. So don't beat yourself up if you find writing your second, third or fourth novel harder than writing your first, because that's what happens. But there will be good times, too. When my writing is going well, I'm singing, I'm dancing, I'm flying, and for me that makes it all worth while.

As well as being a novelist, Margaret is a journalist working for the UK's Writing Magazine, and she teaches creative writing for the London School of Journalism. She was NWS Organiser for several years, and has had the great pleasure of seeing many of her NWS babies become hugely successful novelists. She's on Facebook and Twitter - and you can find out more about Margaret on her website at:
www.margaretjames.com
www.twitter.com/majanovelist
www.margaretjamesblog.blogspot.com

This is a fantastic interview, I really enjoyed reading it.
I completed a course at the London School of Journalism last year, and Margaret was my tutor. I couldn't have asked for a better mentor and I hope that one day, I am one of those 'babies' who becomes a successful novelist! It would be partly because of Margaret if I do :-)

Great interview. I especially like the bit of advice about finding your rut!!

I was one of Margaret's "NWS babies" and her support was invaluable and kept me going! Great interview!

Great interview - such interesting comments about how you write.

So that's why it's getting harder.
Yes, I liked the bit about the rut too.

Super interview Freda. Thank you, to you and Margaret.

That was a really good interview. Margaret's responses didn't sound pat, it was as if she was sitting across the table, tea mug in hand, remembering, encouraging - even laughing at herself a bit.
Loved it!

My children are still waiting for a story about a fairy. Or a pony...