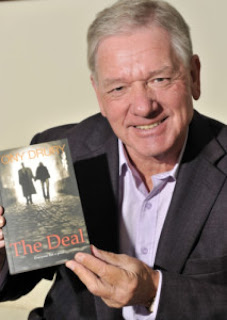 Today we welcome Tony Drury to the Blog. Tony, a City Corporate Financier, blogger, author and entrepreneur is more well known for his financial books and helping to raise £2.8million for Quercus, the company that published The Girl with the Dragon Tattoo books, but in 2006 decided to follow his dream to write fiction and in May 2012 MEGAN'S GAME was published by City Fiction. Tony's writing has gone from strength to strength, launching THE DEAL in October 2012, both books receiving rave reviews from The Daily Telegraph, City A.M, Money Maker Magazine, The Times to name but a few. He blogs weekly for Enterprise Britain, both in his name and that of his alter ego, Mr. Angry. Tony lives in Leighton Buzzard, Bedfordshire with his wife. They have just become grandparents.

Do tell us something of your writer’s journey, and what made you want to write fiction?

Over the years as a corporate financier I’ve written extensively both for financial journals and six books. The most successful was ‘Investment Clubs’ which sold 25,000 copies. When I reached 60 years of age I decided to try my hand at fiction.

Your crime thriller, MEGAN’S GAME, is to be released as a feature film next year. Where did you find the inspiration to write it? 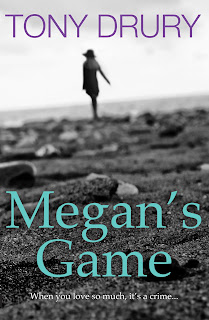 I was inspired to write it because we had a holiday home in Aberdovey, central coastal Wales. There’s a legend that if you hear the bells from the sunken village ring at midnight you’ll find romance. It took me five years to find out if this applied to Megan a Welsh widow looking for love.

As a writer, what do you think will be your greatest challenge in seeing your work filmed?

None. There is no challenge. It is perhaps one of the greatest fulfilments of my life the day Paul Tucker, the producer, said he wanted to make the film. I stood in the middle of Shepperton Film Studios and said “thank you” to Him upstairs.

What part does romance play in the story?

Huge. I’m a very average writer. Therefore I write about what matters most to people. Megan wanted to find love. That’s what many people want to do.

Are you a plotter or a panster? How much planning do you do before you start a novel?

Because my base is corporate finance and London, the plot is fairly easy. It’s characterisation and particularly women that is my big challenge. My editor Laura is working overtime to help me.

As a businessman with a heavy schedule, can you work anywhere, or do you have a favourite place to hideaway and write?

I write mentally 24 hours a day. I was fined for speeding on the Leighton Buzzard southern relief road recently. I opted to take a Driver Awareness Course. That’s in my next book. I write between 5.00am and 10.00am.

Tolstoy and Anna Karenina. Makes me seems like Enid Blyton. Gerald Seymour has been important (his first book was ‘Harry’s Game’ which is where I’ve taken ‘Megan’s Game’ from. Love Wilbur Smith. ‘When the Lion Feeds’, is definitive.

Answering questions that could land me in huge problems.

If the aliens landed which book would you suggest they read first?

Any. They’ll be arrested by DCI Rudd for loitering.

Your next title, CHOLESTEROL, will be published this summer. Which character from this book would you most like to trade lives with?

DCI Sarah Rudd. I have a DI from Bedfordshire Police helping me with her character. I’m not sure which one I’m most fond of. 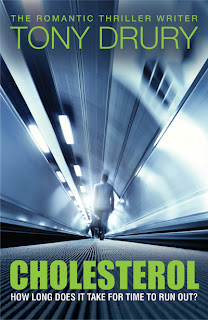 Adrian Dexter is a corporate financier struggling through the turbulence of recession in 2012. Far away from the City of London, the love of his life waits for him in Johannesburg - as does his mortal enemy and notorious South African fraudster, Nigel de Groute. As if that wasn't enough, he is also about to turn sixty.

When Adrian meets the beautiful Helen Greenwood and they embark on a passionate affair, he begins to feel young again. But his newfound happiness is about to be rudely interrupted…

A business merger; an unplanned pregnancy; a kidnapping; a royal ambush - suddenly Adrian's life is spiralling out of control. Can he get a grip before it's too late? Can DI Sarah Rudd continue to triumph in her fight against evil and corruption? And don't forget about those nasty fatty deposits lurking beneath the surface...

Thank you for sparing time to talk to us today Tony. We wish you every success with your books.
Best wishes, Freda