JILL BARRY: Love on the Menu

Jill Barry talks to us about the RNA, the NWS and her onward journey 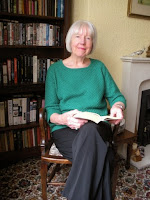 I’ve been fortunate enough to submit several scripts to the New Writers’ Scheme. Why do I say that? Because, the critiques I received helped me reach a level of writing more likely to produce that longed for submission acceptance. Back in the early ‘noughties’ when I first gained success with short stories for women’s magazines, I think I had this hazy kind of feeling that this, plus my insatiable appetite for reading anything I could lay eyes on, would help push me further up the slush pile. What a mistake to make! I don’t think I had any idea of the RNA’s existence then, although my late mother must have read countless romantic novels written by members.

There are contrasting views, of course, on whether a creative writing degree course is helpful. Someone encouraged me to enrol on one and I benefited from being able to compare my own efforts with those of other would-be authors, plus learning to hop to it in order to meet deadlines. My qualification gave me the confidence and credibility to run creative writing workshops, something I enjoy and still do, although it’s online these days.

It’s significant how, while taking that MA course at Carmarthen, I met Hazel Cushion, well known in the industry. Our paths crossed a couple more times until, at Caerleon 2011, Hazel gave a talk and I chatted with her afterwards and pitched my erotic romance, set in the late Victorian era. This resulted in a contract after which I was accepted into the RNA as a full member. I went on to have many more acceptances and, after a period of writing as Toni Sands, took advice from a couple of savvy friends and adopted a new pseudonym for future (non-erotic) romantic fiction. Jill Barry’s first effort was begun while following an online course, run by Sally Quilford, on writing for the pocket novel market.

Two other NWS submissions still sat on my pc. And it’s one of these I’d like to tell you about. Originally entitled Mrs Robinson, the novel explores the ups and downs of life after becoming suddenly single. I’d faced that situation myself but my heroine’s life style is entirely different from mine, though I did live for a while in the city of Bath where my story is set. The iconic name is an integral part of the plot but Endeavour Press have, with good reason, changed my original title to Love on the Menu. There are cakes and kittens and wine. There’s laughter and tears. And it’s a far better read than the original A4 bundle that went to my lovely reader. She knows who she is. Thank you so much.

Thank you for visiting the blog, Jill.

The RNA blog is brought to you by
Elaine Everest & Natalie Kleinman
If you would like to write for the RNA blog please contact us onelaineeverest@aol.com

Lovely to find out about your path to publication, Jill. I love the title Love on the Menu! Good luck with your latest release!

Thanks, Helena. Lovely of you to call by. Yes, there is quite a bit about food in this one! All best xx

It's lovely to hear about your journey to publication. It is always so encouraging to listen to how people finally attained their goal. And then changing Genre and becoming Jill Barry. Thanks for sharing and look forward to Love on the Menu.
Lorraine

Thank you, Lorraine, for calling in. I'm glad you enjoyed reading about the ups and downs of it! Good luck with your writing and I hope you find Love on the Menu to your liking x