June Davies: ‘The last time we’ll ever see each other…'

Welcome to June Davies who tells us of her fascination with her family’s past and the source of what could be many novel to come. 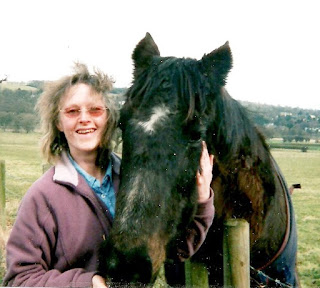 Is it the way of time, do you think, that when we are young and the old folk begin telling their tales of how they used to live and stories about our family’s roots – we’re not really interested and scarcely pay any heed?
By the time we are interested, become curious about the past and keen to discover the stories, memories and history of our family or home, those old folk who could answer our questions and tell us what we want to know are gone. And there’s nobody left to ask.
This brings me to an Edwardian letter passed on to me by a cousin some thirty-odd years ago, and a beribboned chocolate-box containing an old photograph with an intriguing note written on the reverse.
“The last time we’ll ever see each other.”
I unearthed the chocolate-box from a heap of long-forgotten stuff that had once belonged to my grandparents’ house. The photograph was a wedding party and looked to be from the 1920s. Everyone decked out in their finery, and gathered on the steps of an attractive church I didn’t recognise. I didn’t recognise the people, either. But I knew I was related to some of them because faces, like eye-colour and characteristics, can be passed down through the generations. These men and women smiling out at me from 90-odd years ago, looked like people I’ve known in my own time. But who they were, where they lived, what their lives were like -- I’ve no idea! Perhaps one day, I’ll give them all names, create their characters, and let their stories unfold and be told . . .
Back to the Edwardian letter!
Years ago, long before the internet changed researching forever and all sorts of new online resources for tracing your family’s past became available, one of my cousins retired and set about tracing one branch of our family tree.
As children, we both had fond memories of an elderly aunt who could neither speak nor hear, but with her love and kindness and neat handwriting, she managed to communicate with us just fine, and we with her.
Aunt had written the Edwardian letter from an institution when she was about nine or ten years old. It was addressed to Dear Mam and Dad, the handwriting was beautiful copper-plate without a single blot or mistake, and the spelling and grammar perfect. She told them she was well, and about her progress at the institution. It was clear she hadn’t seen her parents for some years, and sending letters home was something allowed only rarely.
My cousin gradually pieced together Aunt’s story. When she was about four years old she caught Scarlet Fever. She survived, but could no longer speak or hear. Her family was poor, and she was taken away from them and placed in a Catholic institution where she was taught reading, writing and skills so she could find work in service.
From the age of thirteen, she did indeed find work - but not in domestic service. In a laundry.
Until she was nearly seventy years old, my aunt worked in that laundry where most of the employees were deaf and dumb. At a meeting of local businessmen, the laundry’s owner was recorded as saying he always employed dummies, because they couldn’t waste time gossiping and he got more work out of them.
So, Aunt’s story we know about, but what about the people in the old photograph from the chocolate-box?
Who are they? What are their names? And why was that wedding-day the last time they were ever going to see each other?
Ah, well, time to make up some characters and write a story . . .

The Apothecary’s Daughter
The arrival of a mysterious stranger from South Carolina, the disappearance of a precious family keepsake, and an old tale about a hidden hoard of medieval silver and jewels . . . 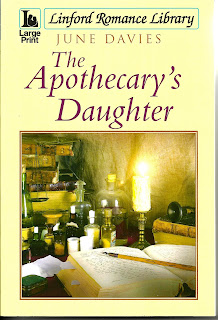 Keziah Sephton is kept busy caring for three generations of her family, as well as helping run her father’s apothecary. She has neither thought nor time for romance.
Hard-working George Cunliffe has loved Keziah since they were youngsters, and when Benedict Clay arrives at the apothecary claiming to be blood-kin, George is immediately suspicious of the soft-spoken Southern gentleman’s motives.
After her grandmother’s precious Book of Hours disappears, Keziah is tormented by treacherous doubts.
Confronted by the dreadful consequences of greed and bitter resentment, Keziah is swiftly enmeshed in a shocking spiral of deception, betrayal, ruthless ambition – and cold-blooded murder.
About June:
June Davies was born in an old house overlooking the Lancashire coastline, and the seashore finds its way into many of her stories. Sometimes, as in The Dog Star, the sea is a powerful force driving the inhabitants of 19th Century Monks Quay, while in other tales like The Family by the Shore, it has a gentler presence, yet still influences the characters and their lives.
History has intrigued her since schooldays, and when as a mature student she read history at University of Liverpool, she says it was like being given a passport to travel through time!
June Davies writes historical romantic suspense and family sagas, short stories and serials, and short stories for children – She still lives within walking distance of the seashore.
Links:
Kindle
Amazon Page
Website

Thank you so much, June for the insight into your family history. We long to know
more about the wedding guests in your photograph. Please keep us posted!

I would love to know about the people in your photographs.