We are thrilled to have Julie Cohen as our guest today. Pantser or Plotter we can all earn from this informative piece.

When I started out my writing career, I would have considered myself a ‘pantser’: someone who 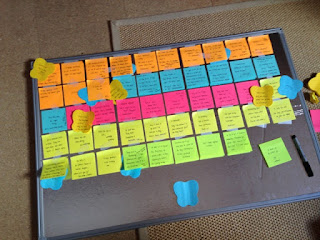 started writing a story and flew by the seat of her pants as she wrote, not knowing where she was going. I liked to discover the story as I went; part of the pleasure for me was being surprised. The idea of writing a synopsis before I started to actually write the novel would have brought me out in hives. I had some characters, I had a general set-up, I had some vague idea of where I was shooting for…other than that, I just went for it and lived the journey with my characters as it happened.

Somewhere around my eighth novel, things changed. I was writing a story about an artist who was drawing a comic strip that echoed her real life (except with added giant space ants), and I discovered that I couldn’t just make stuff up as I went: I had to plan the events of both stories. I didn’t plan out the whole thing before I started; I just paused, every now and then, as I wrote, to work out what was going to happen a couple of steps down the line.

As the years and the novels have gone by, I’ve become more and more of a planner and less of a pantser. This is partly because my novels are getting more complicated, and maybe also partly because my brain is getting older and less flexible. Now, before I write, I usually make a plan on Post-its for the general story. Sometimes I try to write a synopsis, too.

My latest novel, TOGETHER, is the most complicated one I’ve written yet. It starts in 2016, and goes backwards, following a couple’s life from their 43rd wedding anniversary all the way back to the day they first met in 1962. Because it starts at the ending, I absolutely had to know the ending before I started to write. Because it’s told backwards, I had to plan out each part of the novel in incredible detail, so that everything made sense, and yet no twists were given away beforehand.

It was a novel that was even difficult to talk about. “At the beginning, in 2016, which is actually the end of the story, but you read it first…”

I used to think that planning my story this way would ruin my enjoyment in writing it. Why even bother when you know the ending already? But it doesn’t at all. A neat plan is very different from a living, breathing world of a novel. I still discover plenty about my characters and my story as I write. And there’s a whole different kind of satisfaction in travelling with a map.

From starting out my career as a ‘pantser’, I’ve now gone in the other direction, so much so that today I need to start writing a new novel, but I’m panicking a bit because I only have a plan for the first 25,000 words.

What I’ve learned above all, though, is that every novel is different. What works for one story, and at one stage in your career, may not work for another story, or another stage. Every novel, whether planned or not, is its own journey.

Julie Cohen’s new novel, TOGETHER (Orion), was chosen by the Independent as one of their Ten Best Book Club Books, and her two previous novels, FALLING and WHERE LOVE LIES, were shortlisted for the Romantic Novel Awards. DEAR THING was a Richard and Judy pick. She’s a popular teacher of creative writing and runs her own literary consultancy. She joined the RNA New Writers’ Scheme in 2002 and since then has published twenty-one books. Her website is www.julie-cohen.com and she is on Twitter as @julie_cohen

I found this a fascinating piece. I think it's very true that our brains become more flexible and inventive as we age, perhaps making use of all that experience and the footwork done in previous writing.
Last night, I watched a documentary about the Japanese artist Hokusai, who carried on experimenting and creating works of incredible complexity and beauty until he died in his 90th year, all the while believing that as he aged, he was accumulating skill and wisdom that would allow him to push the boundaries of art ever further.
Julie's piece echoes this contention wonderfully, with the proof very evident in her own success.

Brilliant - blog from Julie and comment from Gabrielle. My latest starts at the end too, my heroine was born on the same day as the Queen! Julie coached me in the past and I still return to techniques she taught me.


This blog post couldn't have come at a more apt time for me. I've always been a pantster, enjoying the journey of discovery in the same way as my reader would. BUT, I'm in the early stages of my ninth novel, and only this morning, sitting looking at the screen with disappearing inspiration, I had the traitorous thought that maybe I should just try working out the complete plot. Thank you Julie, for giving me another incentive to do so.

By the way, I've never forgotten the mantra you gave us at a previous RNA conference about avoiding repetition! Was it 'repetition is hell'? Not sure if these are the exact words, but it's jolly useful.