Today we have Regency writer Wendy Soliman writing about her latest book. Wendy was brought up on the Isle of Wight, which she says explains her love of history because of historic buildings littering the landscape at every turn. She now lives in Andorra with her husband and a rescued dog of indeterminate pedigree, dividing her time between there and the west coast of Florida.

Welcome to the RNA Blog, Wendy.

Hi, my day job—no, make that my life—revolves around writing Regency romance. My latest, Compromising the Marquess, is the first in a four-book series charting the fortunes of the Forster dynasty. Leah Elliott writes gossip for a scandal sheet to support herself and her sister. When she moves to the coastal town of Denby she doesn’t expect to find much that will interest her readers, until she meets Hal Forster, Marquess of Denby, whose activities intrigue her, and excite her suspicions.

This is how I imagine her diary would have read:

I accompanied Mrs. Wilkinson and some other ladies to The Hall today. Mrs. Wilkinson was keen to see the marquess and demand an explanation for the unruly behaviour at The Boar’s Head. I, too, was keen to make his lordship’s acquaintance, but was disappointed. He was not at home. Instead we were received by Lord Gabriel, the marquess’s youngest brother. He’s a handsome gentleman in his final year at Cambridge, but no match for Mrs. Wilkinson when she’s on her high horse. I felt quite sorry for him.

Actually, I believe the marquess was at home. As we were entering our carriage I chanced a backward glance to admire the magnificent building and saw a tall gentleman with dark blond hair tied back in a queue watching us from an upstairs window. I am sure it must have been he since he’s reputed to wear his hair in such a fashion. I wish I could have met him.

There’s no help for it. ‘Leon’ will have to put in an appearance at The Boar’s Head tonight. Mrs. Wilkinson is convinced something unusual will happen and I can’t afford to pass up an opportunity to report the event. I shall don my usual boy’s clothing and take young Jonny with me for protection, along with Pickle. He isn’t much of a guard dog, but he still makes me feel safe.

When we arrived there was a large gathering of men congregated in a clearing behind the tavern. My heart lurched when two men, stripped to the waist, appeared in their midst and I realized we’d happened upon a bare knuckle fight. I looked away when the men started hitting one another, feeling slightly sick but unwilling to admit as much to Jonny. Not that he would have noticed. He was totally taken up with the spectacle, face shining as he cheered loudly each time a blow landed. I directed my gaze round the clearing, seemingly the only person present not entirely focused on the fight. If someone was using the event as cover for something illegal, I ought to be alert to that possibility rather than following the action, willing the smaller man to succeed.

“Have you seen anything suspicious?” I asked Jonny.
“Only that chap’s left hook,” Jonny replied, his gaze still fastened on the fight.
“Oh, my goodness, the small man’s got up again.” I felt extreme agitation. “Surely he ought to stay down. We must do something to stop this!” I dashed forward. “He’ll be killed if we don’t.”
Jonny grabbed my arm, showing a surprising amount of strength for such a thin youth. “You’ll be the one killed if you try that.”
“Maybe, but this is barbaric—”
“The small chap knows he has to fight on. There would be a riot if he gave in so easily.”
“So easily? He just—”

Another loud cheer, Jonny contributing to it as enthusiastically as anyone. “Did you see that, miss? I told you the little guy wasn’t finished. He just planted the big chap a right facer.”

I blinked, hardly able to believe my eyes. The larger man was now the one prostrate on the ground. His smaller opponent stood over him on swaying legs, blood covering his torso, ready to strike again if his foe was foolish enough to stir. It seemed that he wasn’t. The fight was over.

Men started to move and I suddenly had a clear view of the men standing across from me. I gasped when I noticed a tall man in well-cut clothes, blond hair tied back in a queue, looking directly at me as though he could see straight through my disguise... 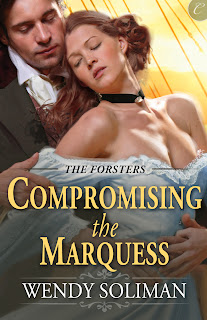 The Forsters Book 1, Compromising the Marquess by Wendy Soliman Available now from Carina Press  for just $1.99 Amazon  and Barnes and Noble

Wendy
Posted by Freda Lightfoot at 8:30 AM

I think a series of books is spot on - readers seem to love them - not sure I could keep track of all the threads. It sounds a good read.

This sounds wonderful, Wendy, and Leah sounds like a fascinating character. I'm intrigued!

Good luck with it!

Thanks for stopping by, ladies.