Christina Hollis is a writer and broadcaster living deep in the Gloucestershire countryside. When she isn’t writing, she is cooking or pottering around the garden, hindered by varying amounts of livestock.

I’ve been writing all my life, and one of the most important tips I can pass on is to remember the words of Norah Ephron’s mother: “Everything is copy”.

This was brought home to me when I was studying eighteenth-century European history, and finding the course heavy going. It was only when I read through the notes I made while on a potentially disastrous holiday to Paris that the subject came alive for me. My then-boyfriend booked a week’s holiday in the city of romance for us - and his mother came too. His excuse for this passion-killer was because she had always wanted to see Paris, and he couldn’t bear to disappoint her. Luckily the holiday wasn’t too bad - considering the circumstances - and it made me think how a cuckoo in the family nest might have livened up all those starchy pre-revolutionary French aristocrats.

I used my notebooks as a source for Lady Rascal, which was brought out in print by Harlequin Mills and Boon as part of their Masquerade Historical Romance Line. Madeleine is a penniless Parisian who dresses in stolen clothes during the French Revolution and is mistaken for an aristocrat. “Rescued” by Philip Adamson, a genuine and gorgeous English gentleman, she lives in fear of discovery. The tension mounts as their attraction for each other is hampered by her guilt at living a lie. Then disaster strikes - and only Madeleine’s street-smart skills can save the Adamson family fortunes.

I’ve now released Lady Rascal as an ebook on all platforms, including
Amazon
iTunes
Waterstones 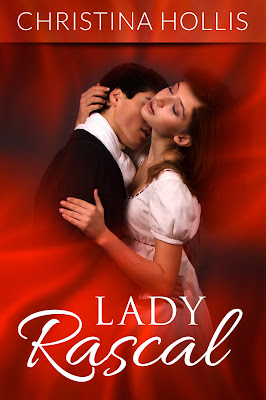 I love the bright red of the cover - I think it suggests the danger of Madeleine’s situation as well as her feelings, and at this time of year it adds a festive touch.

I assumed I’d have loads more free time when I started working from home rather than commuting. That hasn’t turned out to be the case! Work expands to fill the time allotted to it, and spills over into everyday life, too. I always used to produce a traditional rich fruit cake for Christmas, covered in marzipan and royal icing - all made by hand. With the pressures of writing to deadlines, editing and publicity work, time is now at a premium so a Chocolate Mincemeat Cake is the new centre-piece of our Christmas tea. It can be made quickly, a day or two before the main rush. To decorate, I simply tie a red ribbon around it, and add a spring of (non-edible) holly from the garden.

METHOD:
Pre heat oven to Gas Mark 3/Electric 160 deg. C, Fan 140 deg C.
Line a 20cm/8” tin with a couple of layers of greaseproof paper.
Place all ingredients in a large bowl and beat for 1- 2 minutes, until well mixed. Spoon into the prepared tin and bake in the oven for between 90 minutes - 2 hours, or until a skewer inserted into the middle of the cake comes out clean. You’ll probably need to cover the cake with tinfoil toward the end of the cooking time, to stop it browning too quickly. Leave the cake to cool in its tin for a while before turning out onto a wire rack to cool completely.

This cake doesn't freeze and is unlikely to keep for as long as a traditional rich fruit cake, but this doesn’t matter as it’s always eaten up in a very short time.

Finally, be careful what you wish for when it comes to Christmas presents. Look what my sister got...triplets! 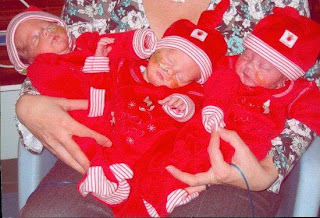 What is the most unusual Christmas present you’ve ever received? There’s a signed book from my Mills and Boon backlist for a comment picked at random.

Many thanks to Freda and the team for inviting me here today. I'm off to Son No. 1's school carol concert now, but I'll be back to respond to comments afterwards. See you later!

Gosh, I hope Santa doesn't bring me three of those! Lovely photo though - and your cover is gorgeous. Thanks for an entertaining post.

Hi Chris, thanks for such a kind comment. My nephews are gorgeous and they'll never lack a friend (or two!) while they're growing up, but I wonder what might happen in years to come if all three fall for the same girl. Could be a story there...

I love hearing the different things that trigger writers to come up with their story ideas. I think Paris must have trouble living up to all its romantic expectations - I had a disastrous holiday there some years ago, and am now wondering whether there's a story in it!

Hi Stephanie, thanks for commenting. Maybe that title "The City of Lovers" meant our expectations of Paris were pumped up a bit too high!