Today we welcome Natalie Kleinman, another of our contenders for the 2015 Joan Hessayon award 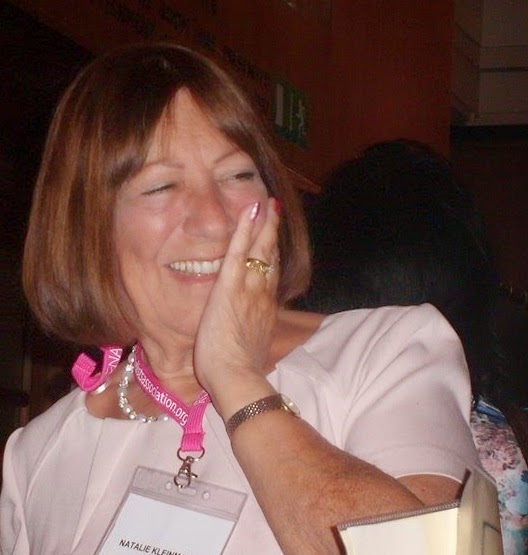 Congratulations on graduating the RNA New Writers’ Scheme. Can you tell us when you first decided that you wished to become a romantic novelist?
I didn’t so much make the decision as it was thrust upon me. I began writing short stories, initially targeting the WOMAG market, occasionally sending competition entries in other genres. However, it soon became apparent that my forte lay with romantic fiction with over twenty-five stories published within two years. The satisfaction was enormous but something crept in under my defences. Could I write something longer? A whole book? I joined the (oh so wonderful) New Writers’ Scheme in January 2013, anxiously submitted my manuscript and in November of the same year it was taken up by a publisher.
How many years were you a member of the NWS scheme and did you submit a different book each year? Which year’s book did you graduate with?
I was a member of the NWS for only twelve months. When I hit that button in January 2013 I had no idea what lay ahead. Determinedly I finished, read and re-read my manuscript before printing and posting. Making suggested changes I sent my ‘book’ to the outside world. Voyage of Desire (now Safe Harbour) was taken up and after only one year in the scheme I joined the RNA as a full member.
How did you find your publisher?
The writing world is a wonderfully sharing community. I learned about Safkhet Publishing via the RNA and was impressed by their upbeat attitude. Applying online it seemed in no time I was signed up.
Promotion is a big part of an author’s working life. How did you promote your novel?
While feeling diffident, I knew I had to dive into the realms of social networking.
Grasping my courage in both hands I contacted other writers and organised a blog tour. I made my presence felt on Facebook, hopefully without irritating too many people. I turned to Twitter. I became part of a five-handed blogging group. Oh, and on publication day I hosted an online launch party…that was fun! I now run a single-handed blog.
What has happened to you as an author since that first sale?
Less than two months after ‘Safe Harbour’ my pocket novel ‘After All These Years’ was published. Next on my agenda was the RNA Conference. Can one be overly grateful to the RNA? I was lucky to have a one2one with Lisa Eveleigh of the Richford Becklow Literary Agency. She offered representation and I have recently submitted my completed manuscript to her. The pocket novel goes to large print this coming September. I’ve started book number four!
How did you celebrate your first book sale?
In true RNA fashion I indulged in a little wine drinking. My husband took me out to dinner (more wine). Online launch party…more wine, though only virtual this time. But in all honesty how does a writer celebrate the sale of a book? I started the next one of course. About Natalie:
I began writing quite late in life, something I have since discovered isn’t unusual. I have been mother, teacher, Girl Friday and adoring slave to two dogs and a cat (now waiting for me at Rainbow Bridge). I studied general science with the Open University and joined art classes, subsequently abandoned because there are only so many hours in a day. My natural tendency is to throw myself completely into what I am doing, and never more so than with my writing. Together with my personal blog and my participation in the RNA Blog which I co-produce with Elaine Everest (though not this time of course), my writing is of paramount importance. I’ve never worked so hard in my life before and I’m loving it.

Thank you, Natalie, and good luck with your writing career.

I'm delighted to be on the blog on the 'other side of the table' so to speak. What wonderful opportunities the RNA gives it's members. Thank you for sharing my journey.
Natalie

We'll done on all your success. I shall be picking your brains for some well needed advice at this year's RNA conference!

I'm so looking forward to seeing you again at the Conference, Wendy, along with many other friends I have made on the way. We all pick each other's brains and we all help each other - one of the things I like most about the writing community.

A lovely interview Natalie, Congratulations! Such a pleasure to have shared this exciting journey with you!

What a whirlwind of a writing career so far, Natalie! Great interview. Looking forward to meeting you in May.

Thank you, Karen and Ashlinn. Whirlwind is certainly how it feels sometimes. I wouldn't have it any other way though. 21st May is highlighted in my calendar.

It's wonderful to hear your great success story, Natalie! I think very many of us have cause to be grateful to the RNA NWS.

Indeed we do, Rosemary, and to the greater community it serves. Thank you for your good wishes.

You've certainly taken the writing world by storm, Natalie! Congratulations on your graduation from the NWS. See you at the party.

Congratulations on your success, Natalie! I look forward to meeting you at the party.

Thank you, Joan and Janice. Really looking forward to the party. Still haven't got the shoes though!

What a whirlwind year you've had with your writing, Natalie. Congratulations. I look forward to meeting you at the Summer Party.

Thank you for answering all my questions, Natalie. xx