Writing a trilogy: The Brides of Waterloo

Welcome to Louise Allen, Annie Burrows and Sarah Mallory who produced Harlequin's trilogy of historical romances, The Brides of Waterloo.

﻿
In the summer of 2012 Louise Allen, Annie Burrows and I put our heads together and came up with a trilogy of romances set around Waterloo. The premise was that our heroes were battle-hardened soldiers and we needed a regiment for them, so we decided to try something a little different. We moved away from the glamour of the cavalry or rifle regiments and settled for an artillery unit, a troop called Randall's Rogues, a bunch of misfits who just happened to be excellent artillerymen. They had been given a last chance to redeem themselves and had been brought together into a crack unit under the command of their no-nonsense Colonel, Lord Randall. As Annie puts it, "A dirty dozen in breeches"!
Once Annie, Louise and I had put together our initial proposal, and mapped out three stories, we were ready to approach Harlequin.  The RNA conference was at Penrith that year and Louise and I met up with Harlequin's Senior Editor for the Historical line, Linda Fildew, to pitch our idea in person.  Linda was enthusiastic, took it away to think about it and later that year it was accepted with plenty of time for us to write the books and for Harlequin to plan it into their 2015 schedules.
Then the hard work began, we actually had to write the books.  This involved lots of collaboration, mainly by email (thank goodness for the internet), although Annie and I did meet up in Waterstones, Manchester, where we re-enacted our battle scenes using the cruet set plus any available napkins and a sugar bowl!
﻿
Louise drew up a spreadsheet for the characters and timelines for the three books, Annie kept a note of the Dramatis Personae and I, well I just wrote!  We managed to schedule our work so that we were all writing our books at more or less the same time, which meant we could swap notes and ideas while the stories were fresh in our heads.

I bagged Randall as my hero and had the honour of writing the first book in the trilogy while Melanie and Annie chose two rakish majors, hard-as-iron Adam Flint and the unscrupulous seducer Tom Bartlett respectively.   Fortunately in Brussels at the same time are three strong and resourceful women who prove themselves to be more than a match for our Rogues!

We decided the Rogues should be in blue uniforms, like Mercer's Battery, the artillery troop that inspired our story, and Annie also came up with a motto (Semper Laurifer, which means Always Victorious).  My heroine, Mary, who finds herself at loggerheads with Lord Randall, translates it as Never Fails – To Infuriate! We also gave the Rogues a regimental mascot, a large and very hairy stray that attached itself to the unit and was tamed by Louise's hero, Major Flint. The breed we chose is known as a Bouvier de Flandres, large dogs weighing up to 120 pounds, and looking very fierce, though actually they are very gentle. Ben, or Dog (you'll have to read our books to find out how he came by his names!) features in all 3 of our stories, playing a particularly important role in Annie's  book, A Mistress for Major Bartlett.


There was a certainly amount of crossover with the timelines. A Lady for Lord Randall starts some time before Waterloo and continues after the battle, whereas Annie's book and Louise's A Rose for Major Flint actually commence once the battle has ended.  We therefore have each other's characters wandering in and out of our stories. That was a challenge, but great fun, too.

It is important, when collaborating on linked books, to have confidence in your fellow authors, to trust their judgement. Louise and Annie had already collaborated on an earlier series for Harlequin, and I had known both authors for years, so we were pretty confident we could work together.  We all threw in ideas and were not afraid to speak up if we disagreed (which happened very rarely).  When we needed to use each other's characters in a scene we shared that segment, to make sure we were in agreement and towards the end of the process we read each other's manuscripts to make sure the stories and characters did not clash. Our characters were created and they evolved, squabbled, laughed, cried and fell in love against the backdrop of Waterloo in 1815. Their authors worked, sweated and laughed a lot in the process.

We are all extremely pleased with our trilogy and we hope the readers will enjoy reading these three books as much as we enjoyed writing them. 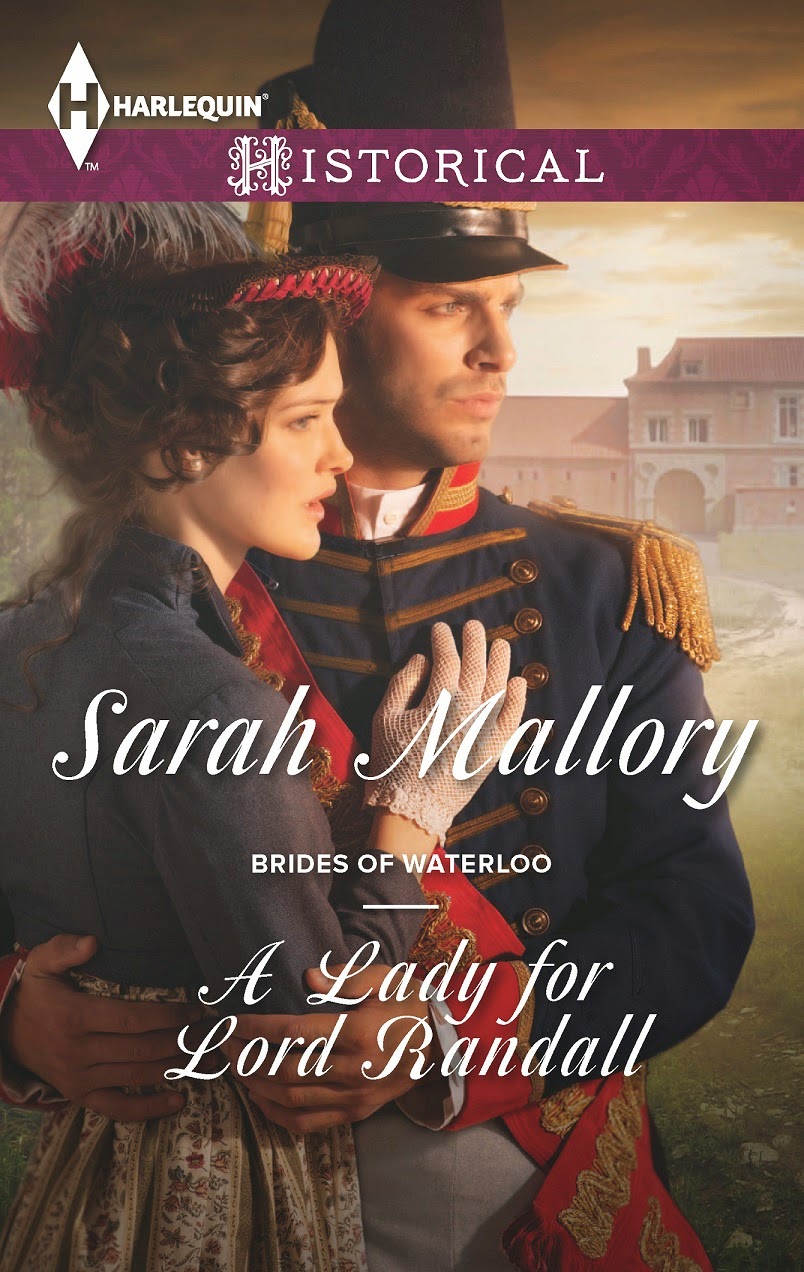 Sarah Mallory - A LADY FOR LORD RANDALL – pub Harlequin May 2015 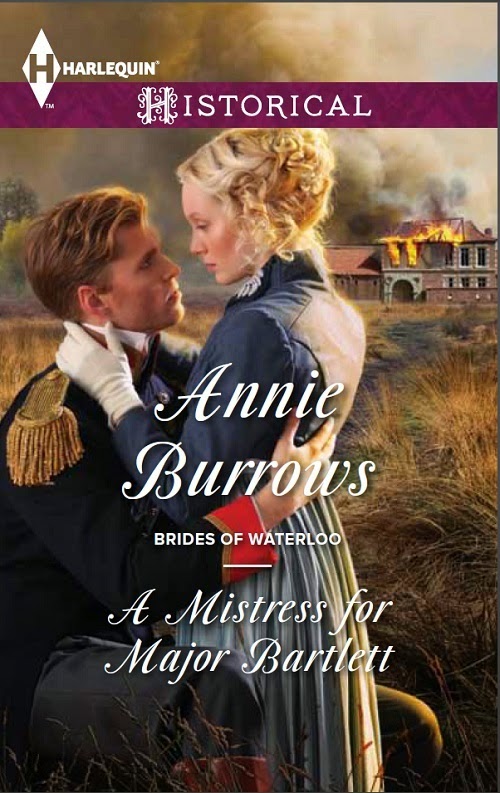 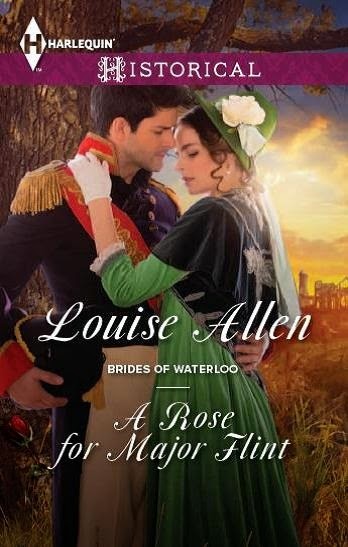 Louise Allen is working on her 49th historical romance for Harlequin Mills & Boon and her 44th, Scandal’s Virgin, won the RoNA Rose Award 2015. She focuses on the late Georgian/Regency period and also writes historical non-fiction. To the Field of Waterloo: the first battlefield tourists, will be out on Kindle shortly.

﻿
Annie Burrows has been writing light-hearted Regency romances for Mills & Boon since 2007. Her first book, His Cinderella Bride was the top seller in the historical line that year. Subsequent books have gone on to win the coveted Reviewer's Choice award from Cataromance. Her books have charmed readers worldwide, having been translated into 19 different languages

Sarah Mallory has written over 20 historical romantic adventures for Harlequin Mills & Boon and won the RoNA Rose Award in 2012 and 2013 for two of her titles. She also writes as Melinda Hammond, and her latest time-slip short story And the Stars Shine Down is now available on Kindle.
Authors' photos – courtesy of Harlequin Mills & Boon.

Thank you, ladies for this most interesting post and good luck with your publications.

You can also read a "prequel" snippet of unpublished material on My Blog http://onebellesstrategem.blogspot.co.uk/

Oh, these sound absolutely terrific. Hope to find a buy link in due course. Great concept - linked novellas. (I've written a trilogy but it's not about Waterloo). Sounds great, ladies.

Thank you, Vonnie, I hope you enjoy it. I have written linked books before but never a trilogy involving two other authors!

What a brilliant idea - they all sound great stories!

What a brilliant idea - they all sound great stories!

Brilliant. Very original collaboration between talented writers. Should inspire others to try this, Have tweeted it, .Wx

Thank you, Ros and Wendy, we had a great time writing this trilogy