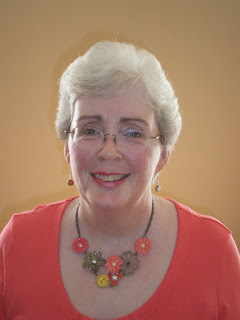 Today I’m delighted to welcome Angela Britnell to the RNA Blog. Angela grew up in Cornwall which she left at eighteen to join the Royal Navy. While serving in Denmark she met her US Navy husband with whom she has three sons. After many years of travelling they now live in his native Tennessee. She volunteers at her local library, and frequently returns to Cornwall to visit family and friends.

I love Cornwall, having lived there myself, but we'd love to know, Angela, what made you want to write and how you got your first break.

I discovered a love for writing about ten years ago and sold my first novel in 2006. As an empty nester I have a lot more writing time now, but you only have to look at my school reports as a five-year-old to see that even then I loved English and hated Maths. Nothing has changed. I did a creative writing class mainly to escape my three rowdy sons for a few evenings! I was immediately hooked, started with short stories then moved on to finally complete a whole novel. I was lucky when a small Nashville publisher was looking for contemporary romance manuscripts for a new line they were going into.


Today, being Friday 13 is supposed to be unlucky, so maybe you'd better not send anything more out until tomorrow, although I can see you aren't the sort to rely on luck. Some writers need silence, others prefer the bustle of a coffee shop, TV, or music playing. What is your favourite mode of working? 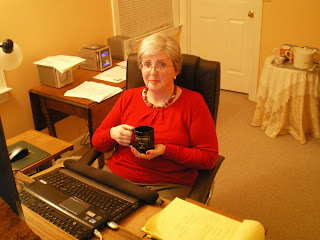 I don’t like to be interrupted when I’m writing and prefer it fairly quiet although I’ll sometimes put on some background music. I’m fortunate to have my own office having taken over my oldest son’s bedroom and painted it a pretty peach colour when he moved out. You’ll see in the photo there’s a tea table in the background – essential to keep the creativity flowing. For more inspiration I’ve also got some of my father’s paintings, many Cornish pictures, plus a very tempting Johnny Depp calendar.


You look very comfortable there, Angela, so how do you set about starting a new novel?

I often envy plotters who have everything neatly planned before they start writing but don’t think I’ll ever be one. I start with a vague idea which might be the main characters and/or a story idea. My first chapter always gets rewritten multiple times as I discover through some bizarre process where it might be headed. It sounds crazy but seems to work for me.


Do you find time for interests other than writing? Do you think it important for a writer to take time off?

I still read a lot although not always romances. I love a good mystery particularly by Elizabeth George or P.D.James. I do water aerobics several times a week and enjoy spending time in my garden. It’s definitely important to have time away from writing although that doesn’t mean it always leaves you alone - I’ve got story and character ideas in many different places from airport departure lounges to church!


Tell us about your latest book, and what inspired you to write it.

My latest book is called OPPOSITES ATTRACT and is based on a dating agency which purposely mismatches people. 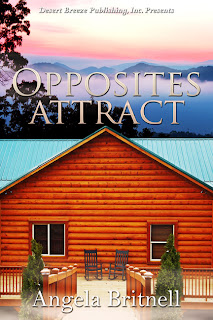 Why can no one believe Holly and Brett are content with their single lives? Certainly not their interfering parents who decide to take action. The "Opposites Attract" dating agency has the theory if normal matchmaking hasn’t worked they’ll turn it upside down. The uptight British policewoman and the laid back Southern writer are complete opposites and so make the perfect mismatch. A weekend in Paris turns magical but secrets, lies and sheer stubborness threaten this romance before it hardly gets off the ground.

This pair will fight love all the way and it’s a question of who’ll give in first. The idea took seed when reading about online dating sites and how differently many people start relationships these days. My characters are an English woman and a Southern man - I’m from Cornwall and my husband is from Tennessee - so you can draw your own conclusions where a few of the ideas might have come from!


What a good idea, that sounds fun. And now for some less serious questions:
Are you ever driven to write by hand?

Rarely. I started off writing by hand until I discovered the story emerged far quicker on the computer and was so much easier to edit. I can’t imagine how Jane Austen managed! If you could know the future, what would you wish for? Probably the obvious - health and happiness for my children, many more years with my amazing husband and of course to see as many books as Nora Roberts!

When do you write best? Are you a lark or an owl?

A lark. I always wake early although don’t usually start writing then. I try to get all the routine life-gets-in-the-way jobs done in the morning and then settle down to write after lunch. If I’m on a deadline I might do some more after dinner but generally by nine in the evening my brain cells are pretty much closed down for the day. When it’s American football season here I write a lot more as my husband is usually laid out in the recliner yelling at the TV and doesn’t notice if I’m in the room – or even on the planet sometimes! 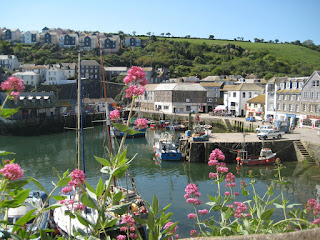 Can you multitask?
How can you even ask that of a mother of three sons? I had to learn to in order to survive - I think most women are experts.


I can see that as a woman in an all-male household, multi-tasking will be essential, so what do they think of your books?

The aforementioned sons are more into sports, sci-fi and fantasy NOT contemporary romance. Having said that they’re my greatest supporters along with my long-suffering husband. They happily brag on me to their friends as long as I don’t ask them to actually read one of my books! They also help with my web page and are dragging me into the 21st century by getting me on Twitter and Facebook.

Thanks for having me on the blog today Freda. It's early morning here in Tennessee and very cold. I'll be popping back in throughout the day and hope to say hello to some of you.

Great interview. Thanks for sharing details of your writing routine/tips with us,Angela. Very inspiring. Love the concept and the sound of the characters in Opposites Attract. I shall look forward to reading it.

Thanks Jan I appreciate the kind comments and hope you enjoy 'Opposites Attract.'

I love this concept, it sounds like so much fun! Although I'm not British, I LOVE tea, and while I don't have a lovely set-up like yours, I have a hubby who I've trained to make it! A new book on my TBR pile.

Thanks Emma and Linda.
A husband trained to make tea is indeed a gem!
Hope you enjoy 'Opposites Attract' as much as I enjoyed writing it.

Angela, what a great interview and I loved the pictures. It was nice getting to know you this way. What an adventurous life you've had. Lots of experience to draw on.

You looked very relaxed holding that cup, I must admit, and I like to read other books other than romance myself. Right now I'm tackling Pillars of the Earth and The Lightning Thief.

May you have many sales, my friend.
Smiles
Steph

Steph,
You're very sweet and thanks for the lovely comments. We read Pillars of the Earth in book club a while back - more about building a cathedral than I wanted to know!

Great interview, Angela. Why is it that other people's writing rooms always look so cosy? And tidy.

Evonne - don't you think like me they tidied them for the picture?!!!

Angela - I'll put the envy on hold then.