On the tenth day of Christmas Angela Britnell hangs her favourite ornament on the RNA tree... 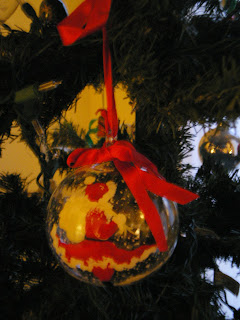 Every year when I hang this beautiful Sicilian glass ornament on our tree so many memories flood back. We'd only been married a couple of years and were stationed at the US Naval base at Sigonella. Our first son was a month old and we lived in a villa on the slopes of Mount Etna. Christmas was a magical time on the island and to the Sicilians it was a time for family and celebrating the true meaning of the holiday. We still crave the wonderful chocolates they sold and oranges picked straight from the trees and sold in the local streets. On Christmas Day the traditional firework displays and guns shot into the air had to complete with Mount Etna erupting. The sight of glowing red lava against the night sky is something we'll never forget. One day before Christmas we went shopping in the lovely city of Taormina and stopped outside a shop selling hand painted glass. This ornament was hanging in the window and although it was expensive we decided to buy it along with three similar ones. We have treasured them now for twenty-six years and they've survived multiple moves and three rambunctious sons. One day we'll share them between our sons and hope they'll continue the tradition of hanging them in pride of place on their own Christmas trees.
You can follow Angela on Twitter here. Why can no one believe Holly and Brett are content with their single lives? Certainly their interfering parents don't and they decide to take action. The 'Opposites Attract' dating agency has the theory if normal matchmaking hasn't worked they'll turn it upside down. The uptight British policewoman and the laid-back Southern writer are complete opposites and so will make the perfect mismatch. A weekend in Paris turns magical but secrets, lies and sheer stubbornness threaten this romance before it hardly gets off the ground. Holly and Brett will fight love all the way and it's a question of who'll give in first.
Posted by Unknown at 8:06 AM

Happy new year ! i read your blog your blog so useful and infomative. i happy.

Good morning from Tennessee! It's neat to see my Sicilian ornament get its day in the limelight. It's hard to believe it's survived this long. Happy New Year to everyone. Thanks Liz for including me in this fun blog.

Lovely ornament and I'm glad you bought it when you saw it. I collect ornaments when I travel as mementos as well and they are some of my favorite things. I feel sure your sons will treasure these as well.

Thanks Jillian. I'd never thought at the time how special they'd become. To survive three boys they have to be!

I think one of the best things about Christmas is decorating with the ornaments that evoke so many good memories. Knowing your boys will get these special ornaments someday makes me feel all warm and fuzzy inside!

Thanks Janet - I think that's why trees with all matching colors and ornaments leave me cold.

What wonderful memories, and what a beautiful way to remember.

Thanks Laurel and I'm excited about 'Opposites Attract' - hope readers will be too!

Your ornament story brought back memories of my favorite ornaments given to me my first year of marriage. I still love to hang them on the tree, and also hate the staged trees that are so perfect. Good luck with your new book, I know it will be a big success!

Glory to God in highest heaven,
Who unto man His Son hath given;
While angels sing with tender mirth,
A glad new year to all the earth