I’m delighted to have Natalie-Nicole Bates on our blog today. Natalie is a book reviewer and author. Her passions in life include books and hockey along with Victorian and Edwardian era photography. Natalie contributes her uncharacteristic love of hockey to being born in Russia. She currently resides in the UK where she is working on her next book and adding to her collection of 19th century post-mortem photos.


You sound like a busy, energetic person, Natalie, tell us about your first book and the excitement of getting that call?

My first book is a romantic contemporary called CHANGE OF ADDRESS. 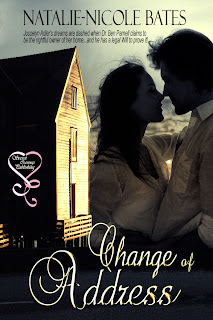 Saved from a traumatic past and successful in her present, Josselyn Adler’s dream of home ownership are dashed when Dr Ben Parnell shows up on her doorstep claiming to be the rightful owner of the house—and Ben has a will to prove it! To Josselyn, the house represents a new start in her life. With a stable home, hopefully a much wanted family wouldn’t be far behind. After a near career-ending allegation is made, Ben has returned home to lick his wounds. Now he must prove Josselyn’s claim to be a fake. But as he gets to know her, he can tell by her shy, often standoffish behavior, that Josselyn is a woman who has been deeply hurt in her past. Although he is attracted to the dark haired beauty that has invaded his life, he is still suspicious of her true motives and her past involvement with his father.

It was released December 16 at Secret Cravings Publishing. The most exciting part of the process was that the contract was offered only a week after I submitted. A week later, I was offered another contract for my paranormal short story, Antique Charming, which was released this past October by Books To Go Now.

Getting noticed with a first book is not easy but you seem to have succeeded wonderfully well. Are you involved in social networking and blogs? Any tips for other writers? 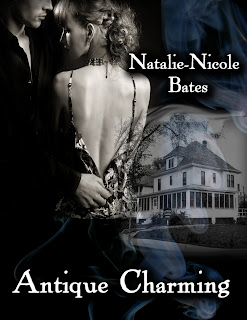 I currently use Facebook and Twitter. I highly recommend every author to do a blog tour when your next book is released. When ANTIQUE CHARMING was released, no one knew who I was. I booked a blog tour and visited 23 blogs in 7 days. Yes, it was a lot of work, but the exposure my story received was well worth it.


Third-generation funeral director Lizzie Morton is about to have her dream realized. She has purchased the long abandoned Nichols Funeral Home and its upstairs flat, determined to restore the funeral home to its once former glory. But a late night visitor, Adam Nichols, claims the funeral home still belongs to his family. Lizzie scoffs at his odd behavior and outlandish claims, but when a vintage photograph appears, she soon realizes, to her horror, that Adam Nichols did once own the funeral home—more than one hundred years ago—and now she has allowed this entity to pass into her home.


And here is the picture that inspired Natalie's novel. 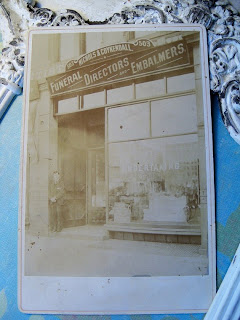 What do you enjoy most about your particular genre?  Are you a specialist or do you have another identity?

I started off as a contemporary writer. I like writing about the present and the everyday man and woman. But after I wrote Antique Charming and it was received well by my readers, I have developed a love for the paranormal as well. So I’m currently splitting my writing time between both genres.

Are you upbeat or concerned about the digital revolution? How do you think it might affect your own career?

I love, love, love the digital revolution! I think that the internet has opened up publishing to a whole new list of great authors. E-publishing offers an author more freedom to express themselves—grittier heroes, darker subject matter. I could go on.

I am currently working on a contemporary that takes place in the same idyllic little town that CHANGE OF ADDRESS was set. The hero and heroine, Ryan Maine and Amii Sloane, made a brief appearance in that book.

My next book, BACK TO YOU, is out January 30 from Bradley Publishing. 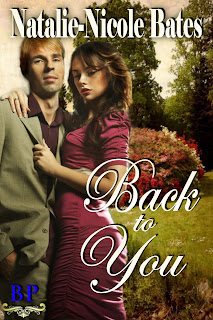 On the surface, Lynsey Reznor seems to have it all. She is beautiful, brilliant, and a successful true-crime writer who has been living the past decade in Miami. But what Lynsey lacks is what she needs the most - a family. After the death of her mother, and yet another failed relationship, Lynsey makes an impulsive decision to return to her hometown of Unity. But Unity will present its own bittersweet memories, most notably, her first love, Nick Lincoln. Twenty years ago, Nick broke teenager Lynsey’s heart when he decided to marry another. He had his own private reasons - reasons he never explained to Lynsey. Now she is back, along with a chance to reclaim her love. But Lynsey wants answers from him that he may never be able to give out of duty and guilt.


We’ll keep a look out for it. Thanks, Natalie, for sharing your views on writing with us. Now for some more frivolous questions:
Do you cry over your own emotional scenes?


Do your family and friends get any sense out of you when you’re writing a book?

I think I’m a little bit of each of my characters, so yes. I always tell everyone to watch what you say to me because it may just find its way into one of my stories.


What is the most you’ve written in a week, and how did you get through it?

I wrote Antique Charming in one day. Granted, it is a short story, 4000 words, but I’m the kind of gal who can’t sit still. What should every good writer avoid? Asking for too much critique! It will leave you more confused than ever!

Are you good at ignoring the ironing?

Thank you so much Natalie, for taking the time to talk to us today. To find out more about Natalie’s books, visit her website: http://www.natalienicolebates.com

I love the way the RNA blog is featuring such a diverse selection of authors. I like the idea of a heroine with an interest in funeral homes, but glad you didn't share the collection of post mortem pictures!

What an interesting blog Natalie-Nicole, especially your initial steps towards publication. Inspired by a photograph of undertakers - it's amazing where ideas can come from. Congratulations on your success and best wishes for the future.

Thank you, Lynda, much appreciated!