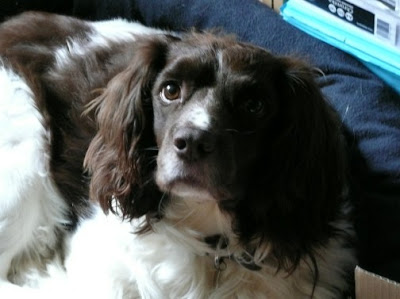 Lots of romantic novelists will admit to having an office companion – sometimes more than one. No, not the invisible person we talk to. (That’s usually the hero or the heroine.) This is the one who keeps us to a schedule and also keeps us in the real world: the one with four legs, fur and a tail.

This is Byron, my English Springer spaniel.

He reminds me when it’s time for lunch, or time for a break (aka walkies) because I’ve been sitting staring at the screen for too long. He also lets me know when there’s someone at the door because I’m deep in book world, have my hearing aid switched off and don’t realise that the doorbell’s just gone.

He’s very sweet-natured and kind – but he’s also a bit of a character, so he’s had a walk-on part in several of my books. Occasionally I turn him into a Labrador (as I did in my RNA Romance Prize shortlisted novel, Sold to the Highest Bidder – but the teddy-carrying habit is definitely his. Usually one he’s stolen from my daughter), but most of the time he’s just himself. In my current US release, Playboy Boss, Pregnancy of Passion, he’s one of the heroine’s family dogs – doing exactly what he does best. Stealing shoes. Only one from each pair, but there will be one from every person in the house piled up on his bed; and he doesn’t chew them, just cuddles them.

Nosey minds (well – mine, at least) would love to know: who’s your office companion? 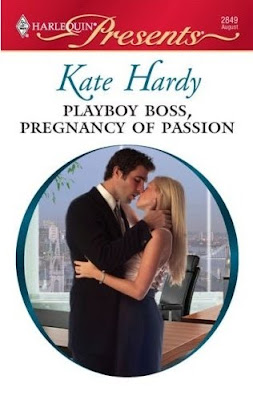 Byron is gorgeous Kate!! I have a terrier of the Heinz 57 variety, though all he manages to do is lay in the room merrily passing wind and barking if anything moves within a five mile radius. Bless!
And my two gorgeous cats Eric & Polly. Polly used to sleep ion my printer - not surprisingly it gave up the ghost and Eric is huge and part human (or at least he thinks so) and I have many conversations with him in which he answers quite happily. He's also a bit dopey so can be found trussed up as a baby in my daughters pram, he doesn't really seem to care! He's also the only cat I know who purrs at the vets, he was so pleased to see the vet last time he nearly caused her to inject herself with his vaccine as he was rubbing his head up against her...
I love my office companions!!

He's gorgeous. Mine is a Miniature Schnauzer, who sits on a chair behind me and sleeps, occasionally insisting on being let out of the shed, but soon returning. Great company.

Ah Debs, Grumpy is as famous as the shed!!

Mine is a Nova Scotia Duck Tolling Retriever (phew!) and her name is Dreamer. She has a mat next to my cherry cabinet where she can sleep or look out the window. Or take a few steps and come for pats.

He's lovely :o) I have a couple of liver and white ones - they're a great excuse to spend an hour on the beach every morning, which is fabulous thinking time. Meet Smokey and Red:

Aw, he's lovely. We have a Westie named Suki and a mixed-dog named Scruffy.

I'm looking for a book and Katie Fforde said I could ask you to put it in the newsgroup. Here's what I remember of it:

The father of the heroine freezes to death (on purpose), she's see's him going out to do it and he tells her to go back inside/leave, it could have been a flashback and I'm sure it's a chick lit book!

I hope you can help!
Leah x

Lori, your dog sounds cute but your cats sound such characters, especially Eric. And it's so sweet that he lets your kids dress him up. (Now there's a lightbulb for a secondary character in a book...)

Debs - I've seen the pics of him on your blog (while lurking - I will delurk, next time, promise) and he looks a real character, too.

Donna - had to google pics of your dog (not a breed I'm familiar with).

Caroline!! Smokey and Red are utterly gorgeous. Thanks for sharing those pics. They look as if they're having such fun in the sea. We've never taken Byron to the beach (though Ben and Sal used to love it. Mind you, Sal spied the lagoon at the farm and she was straight in there. Ben followed. Apparently it took DH ages to tempt them out again.)

Leah - ah, bless. I have a soft spot for Westies as two of my friends have them. (Poppy is the daintiest dog ever.) My first ever dog was a mixed breed - her mum was a Lassie collie and we have no idea what her dad was. She was very soppy, though.

Sorry, have absolutely no idea about the book! What an intriguing premise, though. I'll ask over on my own blog, too, and I'll come back/nip over to yours if anyoen comes up with it.

I too have a Westie! Here she is after RNA conference in Cumbria:
http://www.youtube.com/watch?v=baW4aQN79hs

Oo, I only just found this and have been swooning over everyone's gorgeous dogs. Liver and white springers are the most beautiful creatures in the world (sorry, non-springer owners). I have one called Treacle, as well as a mad Brittany spaniel called Snuffy. They are both on here: