Louise Allen THE OFFICER & THE PROPER LADY
(#7 in Regency Silk & Scandal continuity)
Harlequin Mills & Boon
December 2010
£4.33
The worst rake in the army, a proper young lady in search of a respectable marriage - and the battlefield of Waterloo. Two lives are changed forever.

Elizabeth Chadwick THE LEOPARD UNLEASHED
Sphere paperback (new edition re-issue)
6th December 2010
£7.99 Also Available in e-format.
The 12th century. Renard FitzGuyon returns to England from the Holy Land, bringing his exotic mistress with him. But he’s about to be married to his betrothed, jealous rivals want to kill him, and the
country is going to hell in a handcart.

Janet Woods STRAW IN THE WIND
Severn House
30th Dec
£11.99
18 years after her birth Serafina Finn learns that she's not an orphan. But will her newly discovered family accept her as one of them?

Charlie Cochrane LESSONS IN SEDUCTION
Samhain Publishing
£8.99
7th December
The suspected murder of the king’s ex-mistress is Orlando Coppersmith and Jonty Stewart’s most prestigious case yet. At the hotel where the body was found, Orlando goes undercover as a professional dancing partner while Jonty checks in as a guest. It helps the investigation, but it also means limiting their communication to glances across the dance floor. It’s sheer agony.
A series of anonymous letters warns the sleuths they’ll be sorry if they don’t drop the investigation. For Orlando, the letters pose a more personal threat. He worries that someone will blow his cover and discover their own deepest secret… The intimate relationship he enjoys with Jonty could not only get them thrown out of Cambridge, but arrested for indecency.

Carol Townend BOUND TO THE BARBARIAN
Mills & Boon
December 4th 2010
£13.99
Once a slave, maidservant Katerina has promised to convince Commander Ashfirth Saxon that she is an Imperial princess, but the longer she keeps up the deception, the less she wants to deceive him…

Sarah Mallory DISGRACE AND DESIRE
Mills & Boon
December 2010
£3.99 Eloise Allyngham is known as the Wanton Widow, but she is not what she seems and Major Jack Clifton is determined to discover the truth…..

Freda Lightfoot HOSTAGE QUEEN
13 December
£10.79 and available in ebook format
The first in the trilogy of Marguerite de Valois; a spirited, voracious beauty of the sixteenth century French court.

Grace isn't aware her husband died under mysterious circumstances until he leaves her a Florida beach house. Now a handsome FBI agent is her protector and her sister appears with suspicious intentions.

Vanessa Devereaux MISTAKEN IDENTITY
Cobblestone Press
December 3rd, 2010
Hannah gets more than she bargained for when she agrees to a night of fantasy with a total stranger. 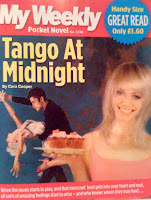 Cara Cooper TANGO AT MIDNIGHT
My Weekly Pocket Novel
December 2010
£1.60
When tango and salsa dancing ignite passion in a sleepy market town, Nicci Tate has secrets to hide if she is going to save her fledgling business.

Nell Dixon CRYSTAL CLEAR
Ulverscroft Large Print
1 December
£16.99
When it comes to love, nothing is ever Crystal Clear

Margaret Mounsdon MEMORIES OF LOVE
People's Friend Pocket Novel
18 November 2010
£1.85
James Bradshaw was Emily's new boss, a man she had got sacked from his deckchair attendant's job by spraying details of his love affair in pink graffiti over Madame Zara's caravan.

Louise Allen INNOCENT COURTESAN TO ADVENTURER’S BRIDE
(The Transformation of the Shelley Sisters #3)
Mills & Boon
December 2010
£3.19
An innocent from a brothel fleeing from the law, an adventurer with a score to settle - two scarred souls who have to learn to trust before they can love.

Ten walks through modern London to find the ghosts and relics of the "long" Regency. Illustrated in colour with original prints

Short Stories
Sheila Norton  ‘A Christmas Story’
‘Yours’ magazine
14 December
Christmas Day isn’t going well for young Sophie or her estranged parents, but the discovery of an abandoned newborn baby on their doorstep changes everything.
Posted by Unknown at 6:46 AM 1 comment: