Today we have one of the new breed of writers, Lynne Connolly, who writes for epublishers, which doesn’t necessarily mean her titles only appear as ebooks. In many cases you can choose to buy print if you wish. So tell us Lynne, how did you get started?
I’ve been writing pretty much all my life, but I only decided to go for publication ten years ago. I was published two years after that, with Yorkshire, the first Richard and Rose book.

To plot or not to plot? How much of a planner are you?
Both formal and informal. I used to do detailed description of each scene, using the Donald Maass workbook, but I think as you write more, you get more confident. Now I work from a synopsis, usually a couple of pages, describing the main turning points of the book.

However I do a lot of staring into space and I have a lot of baths, when I’m working out plot knots and most importantly, getting to know my characters. Romance is all about character and how they cope with the situations you cast in their way, so they must be at the core of everything. I’d rather alter a plot to suit a character than the other way around.

What do you think an editor is looking for in a good novel?
Something different. Or rather, the same but different. They want something that stands out, but they want something they can sell. So if you write romance, they want a story about a developing relationship with a happy ending. That’s not a formula, because so much else goes on, it’s a requirement.

I was going to say they want believable situations, but that’s not always true. I’ve read any number of historicals recently where the plot just wouldn’t work. But they do want believable characters. Not perfect ones - it’s boring to read about perfection - but characters struggling through to win and be with each other. I think an editor knows what she doesn’t want, but she doesn’t really know what she wants until she reads it. 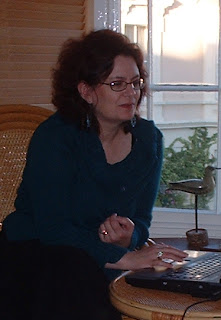 Where is your favourite place to work?
I work in the living room. I sit on the sofa, with the TV or stereo on, and I work. That started when I was a little grammar school girl who had to do her (copious) homework in the living room because in those days that and the kitchen were the only warm rooms in the house! Now I can’t work well in silence. So I use libraries for research but I like noise when I write!
My pc is very quiet, and sits next to the sofa, and my screen, mouse and keyboard are on a little laptop table.

Which authors have most influenced your work?
I don’t know. Honestly. I can tell you the authors I love, and I grew up loving, but I write what’s in my head. I write mid-Georgian set romances, and one of my series features the same couple throughout, and is written in the first person. I don’t know where Richard came from, much less Rose.

What is the hardest part of the writing process for you?
The start of the day. I get that fear that I can’t do it, that I’ve lost it, and I do a lot of procrastination before I start. And galleys. I force myself to go through them, but at that stage, I hate it all and I don’t know why I ever thought such rubbish was any good (that feeling does pass rather quickly, thankfully!)

How do you promote your books?
Any way I can. I do a lot of blogging, because it works for me. I dislike doing "Buy my book" promotions, other than the first time, to let people know there’s a book around. But repeating it doesn’t work for me, particularly online. So I review, write columns and essays and spread my name as a "brand" rather than a particular book.

I also fly across the Atlantic every year for Romantic Times Convention. It costs a fair bit, but it’s wonderful. I do research for the next book, since many of my books are set in the States, and I put myself about a lot. Romantic Times is like nothing this side of the Atlantic. It’s a huge convention, with around 350 authors and 1500 readers and there are two big book signings. I take lots of promo stuff - postcards, little gifts with my name on, other goodies - and attend all the functions, including the three big balls. A lot of business is done at the convention. I’ve finalised two contracts there, for different publishers, and discussed a new series. I honestly think I wouldn’t have got on like I have without going there. And I’ve met some lovely people. It means readers can put a face to the name, and of course I have the "quaint" English accent!

Do you have interests other than writing?
I do miniatures. Doll’s houses and their contents and their dolls. If you hunt on my website, you’ll find lots of pictures of my houses and the dolls I make. In fact, when I started, it was either make dolls for sale, and keep writing as a hobby, or the other way about. I chose the other way. If you think you can’t make a living, check out the websites of Jill Bennett and James Carrington. Jamie’s dolls are exquisite. A double sculpture of Oberon and Titania went on sale for $1000. Underpriced, if you ask me.

What advice would you give a new writer?
First and foremost - don’t give up. The only writer who will definitely not get published is the one who never queries a publisher or agent. And don’t obsess about the market. Write the book you want to, then look around for the market. Decide what you will compromise on to make your story marketable, and what you won’t. Value yourself. It’s so easy to get beaten down in this market. You finished a book! How many people can say that?

And join the RNA. Seriously, do it. I’ve had so much encouragement and cameradierie from the members, I don’t think I would have got this far without them.

There are two, so I’ll tell you about the paranormal romance. Paranormal is a huge sector in the States, and with the success of Twilight and Harry Potter, set to carry on that way. My latest, due out on 8th March is Griffin’s Treasure. I write about a secret department attached to the CIA and MI6, called Department 57, because I’ve seen that the most dangerous departments have the most mundane names! My paranormal beings are called Talents - I have vampires, shape-shifters (all mythical beasts), and anthropomorphids (anthros) like mermen and suchlike. It’s James Bond with fang and claw!

In this one, the hero Josh, a British football player for Manchester Dons, goes to San Francisco to hunt for his brother Laurie, who has been kidnapped by scientists so they can experiment on him. He finds Chana, an ex cop, who has a secret even she doesn’t know about. Helping Chana come to terms with her secret and finding his brother, together with falling deeply in love for the first time in his life sends Josh into a spin.

Griffin’s Treasure was published before and won the 2004 EPPIE for Paranormal Romance, but this version is heavily rewritten. It was really interesting to revisit the book, and it showed me just how much I’ve changed my writing style even in 6 years.

You can read an extract and more details on my website: http://lynneconnolly.com/GriffinsTreasure.html

I’m writing the next and, for now, the last Richard and Rose. I really don’t want to say goodbye to this couple, and they will reappear in cameo roles in future books. Try to keep Richard out! The newest episode in their lives, Maiden Lane, comes out on the 15th March.

What I originally planned was a quiet man in the lower ranks of the aristocracy who would solve country house murders with his unassuming wife. What I got was Richard Kerre, Viscount Strang, dandy, leader of fashion and heir to one of the richest titles in the country. I didn’t plan him that way. He just arrives. Master at swordsmanship, he’s not afraid to wear pink silk and lace, and yet he’s all man. This adventure sees him and his beloved wife Rose back in London, trying to survive a joint attack by both their principal enemies. This time someone has to die, because there’s no chance of a standoff.

It’s very hard saying goodbye to my couple, and they are suffering in this last book, poor things! But it is a romance, and remember what I said earlier!

That’s brilliant, Lynne. And my final question is: You seem to be remarkably prolific and have several publishers, would you share with us how many books a year you write?
I suppose I write 4 full lengths a year and a couple of novellas. Full lengths are usually around 80,000, and novellas maybe half that. Sometimes it’s harder to write the short ones because you need to get all that depth of character in a smaller space!

Thank you Lynne, that was fascinating. You can find out more by visiting her website.
http://lynneconnolly.com

Fantastic interview, Lynne - I loved hearing about RT, and hope I'll join you there one day. Your professionalism and prolific output are a real inspiration.

That was a fascinating interview, Lynne. I'm so impressed with your career path (my first novel is being published by Champagne). I have to agree with Stephanie about your professionalism and output being an inspiration. And a lesson!

Hi, Lynn, always impressed by your phenomenal output. Must have been all that homework you recieved @ NGirls that's given you the work ethic. Ha ha. Your career path is an interesting one to follow. You must have a very vivid imagination as you never seem to run out of ideas for plots. Perhaps see you @ the conference in the summer ?

Great stuff, Lynne. Thanks for sharing.

Loved the interview, Lynne. You're always so supportive and generous with advice to those trying to follow in your footsteps!

Fascinating interview, Lynne - your name was mentioned to me very recently as being a very successful e publisher - and since my first foray into this world is with Samhain this summer, I dashed over here.