Welcome to, Abbey MacMunn, our third contender for the 2017 Joan Hessayon Award. Congratulations on being one of the contenders for this year’s award, Abbey.

How long have you been writing - Is this your first published piece?
I didn’t start writing until five years ago, but I’d always had story ideas and characters buzzin 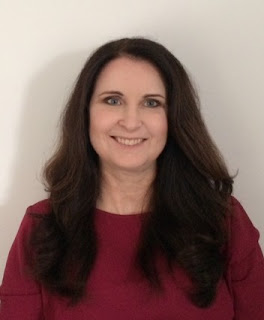 g around my head. It wasn’t until my four kids were all at school that I found myself with some free time, so I began to write those stories down, thinking they would finally be quiet! The opposite happened; more intriguing characters demanded their own stories and I haven’t stopped writing since.

Yes, Touched is the first book I had published.

How many years were you a member of the NWS and did you submit a manuscript each year?
I was a member of the wonderful New Writers’ Scheme for one year and submitted Touched, which was entitled Her Hybrid Curse at the time. After I’d made the changes the reader suggested, I started submitting the same year. I joined the NWS again the following year, before I received an offer from Tirgearr Publishing, and was lucky enough to send a second manuscript.

What came first, agent or publisher?
I don’t have an agent, so publisher first, but I might be on the lookout for one!

How did you find your publisher?
I noticed there was a pitch party on Twitter. For those who don’t know, a pitch party is where you can tweet a short pitch of your novel to participating agents and publishers in the hope of attracting their attention. I thought it might be fun to give it a go, so I took part.
I’d done a lot of research beforehand and had a list of specific publishers I thought might be the right fit for my book. So, when an editor from Tirgearr Publishing (a publisher on my list) saw my Twitter pitch and liked it, she asked me to send the manuscript. I did, and three months later I received a publishing contract.

When was your book published?
My debut fantasy romance was published July 2016.

When inquisitive antique dealer Cami Wilson learns she’s the revered offspring of an immortal mother and a mortal father, it’s not just her hybrid status that has her all flustered. The title comes with her very own super-sexy guardian.
Jaded immortal Joseph Carlisle has only one thing on his mind; his sworn duty to protect the hybrid from those who wish her harm. Anything else would be complicated. That is until they meet. Chemistry sizzles between them but there’s a problem—the hybrid's curse. Cami’s touch, skin to skin, proves near fatal to her and all immortals, Joseph included.

What are you working on at present?
I’m working on the sequel to Touched and the finishing the final edits on a sci fi romance – the second manuscript I sent to the NWS.

What piece of advice would you give current members of the NWS?
Don’t be afraid to send your work to the NWS, no matter how much you think it’s not ready. You might feel reassured or inspired when you get your report back, you might even cry, but their advice and encouragement is second to none—you will learn from it and you will become an even better writer than you already are.

Thank you, Abbey. Congratulations again on graduating the New Writers’ Scheme. I hope you enjoy the Summer Party.

Congratulations, Abbey. A lovely interview. Looking forward to
meeting up at the RNA summer party next month.

Thank you, Cathy. See you there!

Gosh, Abbey - 4 children and you still find time to write! That's amazing! Looking forward to meeting you in person next month :)

Thanks, April. Looking forward to meeting you too :)