Red Roses, a Symbol of Love - Even Dead Ones by Anna Jacobs

Anna Jacobs, author of over 47 novels, tells us how even a bouquet of dead roses can mean love...

Many years ago, when we were first married, I bought my husband some red roses for Valentine’s Day and it turned out that no one had ever bought him roses before, even though he’s a very liberated man. He loved them so much that he wouldn’t let me throw them away even when they died, so for two extra weeks we had a vase of extremely dead roses standing in our living room. It made me feel warm and happy every time I looked at them, and I caught him smiling at them or touching them with his fingertips several times. We still smile over that memory. I’ve bought him flowers since but they’ve never had the impact of that first time with red roses. 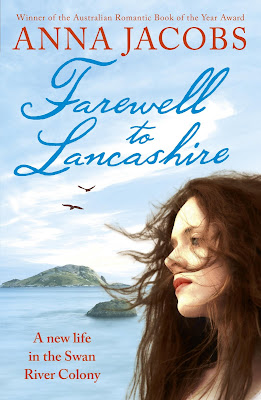 The four Blake sisters have no work and life is hard. Cassandra has fallen in love with Reece Gregory, but he too is out of work and can’t support a wife. When he’s offered a chance to start a new life in Australia, he takes it and promises to send for her. Her father’s health is failing so she can’t leave him.
Their uncle’s childless wife loathes them. She has Cassandra kidnapped to force the other sisters to sail with a group of starving cotton lasses to Australia.
When Cassandra escapes, she follows them. Reece is in Australia too. Surely now she’ll find happiness? But the voyage brings its own difficulties and the past still casts a long shadow.
http://www.annajacobs.com
Posted by Unknown at 4:41 AM

How wonderful that your husband enjoyed those roses so much.

Oh Anna, what a lovely story about your husband and his roses.

Looks like I'm going to have another novel to add to my TBR pile. LOL.