Carol Townend Brings Us a Glimpse of Christmas at Cotehele 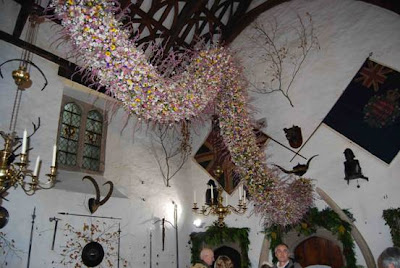 Cotehele is a Tudor house in Cornwall, it was home of the Edgecumbe family. We have been there a number of times as there is plenty for the medievalist to linger over... 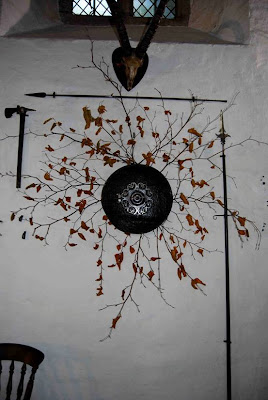 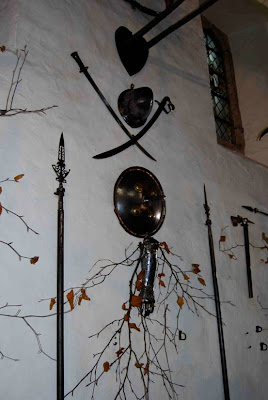 There’s a traditional great hall; a dovecote; a stew pond in the garden where the fish were kept; and a marvellous hillside garden which slopes down to the River Tamar and the lime kilns by Cotehele Quay. Last week we went specifically to see the Cotehele Christmas Garland in the medieval hall. 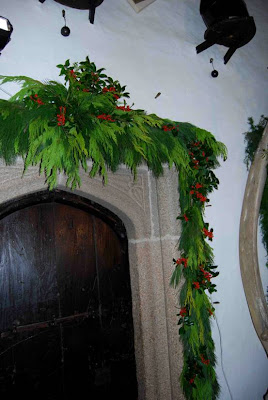 It’s a fantastic creation which must have taken hours to make. The flowers used this year include: honesty, statice, straw flower, ornamental grasses, asters, ivy, various herbs, pink poker and marigolds. Christmas trees were a much later invention (Victorian, I think), but the hall at Cotehele was full of decorations. The arms on the walls were framed with beech stems, with the darkness of the arms and the beech stems making a stark contrast against the rough whitewashed walls:
And here, one of the doorways is draped with cypress branches and holly. Others were festooned with ivy.
If you would like to take a walk round Cotehele yourself, this BBC link will take you there.
Carol’s latest medieval romance Runaway Lady, Conquering Lord is published this month with Mills & Boon
TAMING HIS RUNAWAY LADY

Raised a lady, Emma of Fulford is a fallen woman with a young son as proof. He is all she has in the world, and now the boy’s brutal father has returned.Desperate and afraid, she needs to escape, and fast,so she approaches Sir Richard of Asculf. She begs this honourable Norman knight for help—and offers the only thing she has left...herself.Honourable he may be, but Sir Richard is only human and Lady Emma tempts his resolve. Can this conquering knight tame his runaway lady and stop her running for good?
Wessex Weddings Normans and Saxons, conflict and desire
Posted by Unknown at 4:39 AM

This looks like it must be a fascinating place to visit.

Hi Debs,
Cotehele is fascinating, it has so much history. If you get a chance to go, do. It's a National Trust property, so there are good teas to be had there too!! But the garland is marvellous, it has an ethereal quality to it that doesn't come over on the photo.

Love these pictures Carol and so much nicer than some of our gaudier decorations today. Looking at the pictures I felt that I had stepped back in time. Cothele is one my favourite places and I loosely based Boscabel on it as the home of Adam Loveday in the Loveday series.

Carol, what a fantastic post - wow, wish it wasn't an eight-hour drive from here, or I'd be taking the kids immediately! (Thinks: East Anglia. Sutton Hoo. Wonder if...?)

Hi Kate,
Did you go (Sutton Hoo)? I am now imagining that ship festooned with garlands and holly and ivy...