A Book's Journey by Julia Williams 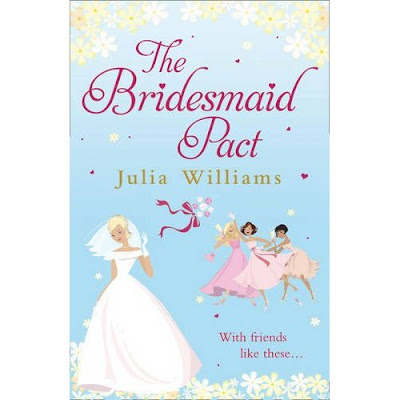 Julia Williams tells us about the book's development...
THE BRIDESMAID PACT which comes out on May 28th is my fourth book, and in a way my most personal to date. Not, I hasten to add, that I have shared any of my heroines' experiences as such, but I did delve deep into some situations from my own life for inspiration, and somehow almost by accident I ended up writing a book set very much in the territory of my youth. That's the strange thing about writing: when my editor suggested I write a book about weddings, I started off with a light bit of froth which was going to involve race horses and vineyards, and somehow ended up with something quite a lot darker, which went nowhere near a race course. I'm glad to say though, an early idea, to have my heroines go to Eurodisney on a hen night did last the distance.
So what did I end up writing about? Well, funnily enough, for a book that is about arguably the most important day in a girl's life (well if she's a romantic like me, anyway), there is just as much in here about friendship - and in particular the friendship of women. I think for a lot of women, particularly, when they have children, those friendships can centre around the domestic sphere, and I wanted to write about that: about the joy, comfort and strength women can give each other, and also about forgiveness and redemption when those relationships go awry.
So my story follows the fortunes of four friends: Caz, Sarah, Doris and Beth, who aged 8 make a pact with one another that when they grow up they will be each other's bridesmaids. Though of course, real life doesn't work out quite as they had planned. But despite all the difficulties that come in their way, the original strength of the Fab Four (named after my own quartet of teenage friends), turns out to be a stronger deeper bond then they might imagine...
Out today THE BRIDESMAID PACT
Avon
£6.99
Posted by Unknown at 8:10 AM

Sounds like a great book! Can't wait to read it.