Scarlet Wilson lives on the West Coast of Scotland with her fiancé and their two sons. She wrote her first story aged 8 and has never stopped writing since. Her family have fond memories of SHIRLEY AND THE MAGIC PURSE with its army of mice, with names all beginning with the letter m. An avid reader, Scarlet started with every Enid Blyton book, moved on to the Chalet School and many years later found Mills and Boon. She trained and worked as a nurse and health visitor and now currently works in public health. For her, finding medical romances was a match made in heaven. She is delighted to find herself among the authors she has read for many years. Lovely to have you with us, Scarlet. Can you tell us how much of a plotter and planner are you? 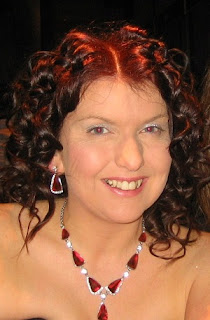 I have my best ideas when I’m lying in my bed at night. Often in that little space of time between sleeping and almost-sleeping. You know the time where if you get up to write it down you won’t get back to sleep? I’m planning on starting my next book with an email. I usually have a clear idea of the beginning of the story, the conflict and a rough idea of what will happen in the end. Mills and Boon are always going to have a Happy Ever After, but my editor has made significant changes to end of both my original stories. What do you think an editor is looking for in a good novel? Something a little different. My editor told me I captured her attention with my ending to Chapter One. And even though that book went through four sets of revisions, the end of chapter one never changed!

Do you write every day? What is your work schedule?
I try to write at least 1000 words a day, five days a week. The thing is, I need peace and quiet to do it. I can write around 1000 words in half an hour, so sometimes I do it in my lunch break at work. I can do it straight onto the computer but I actually prefer to put pencil to paper, so often I print out the previous day’s work, make a few amendments and then just start to write again. I have a fairly quick typing speed but my brain often works quicker than my fingers and I tend to miss little words out. I work full time and have two young sons with a wide variety of after-school activities. That, plus making dinner, washing and ironing can make me wish I had more hours in the day.

What is the hardest part of the writing process for you?
With my first book I found the revisions really difficult. At one point I wanted to give up – I was asked to do something that I really didn’t agree with. So I phoned Kate Hardy in tears and she gave me the best advice ever – find a way to give the editor what she wants - but do it differently. So I did.

What draws you to your particular genre?
I’m a nurse and have always had an interest in creative writing so I guess medical romances were really made for me. I love the medical detail in a story – it makes it so real for me. But I have been told on occasion to lose some of the detail from my story. I find it a little frustrating.

Do you enjoy writing sequels or series? If so, what is the special appeal for you?
My first story is an absolute stand-alone story. My second book THE BOY WHO MADE THEM LOVE AGAIN has a sequel. It is set in a fictional place called Pelican Cove in Mendocino Valley in California and features the Presidential Medical Service. My third book is a follow up to that.

In what way has the RNA helped you or your career?
I joined the RNA after haunting the websites of Kate Hardy and Kate Walker and hearing both of them talk about it. Then I bought Kate Walker’s 12 point Guide. I found out about the New Writers Scheme, and knew it was exactly what I needed. I went through the NWS twice. The first time I had also submitted a partial to Mills and Boon which got a form R. The feedback from NWS was very kind and pointed me in all the right directions – after all I’d written a 50,000 word manuscript with virtually no Point Of View! It had parts of the manuscript circled and highlighted saying “this is what you need more of.” My second manuscript went through NWS at the same time as a pitch opportunity on eharlequin. So I had some comments from my editor at Mills and Boon requesting a full, as well as feedback from NWS. I combined both when I resubmitted. I just want people to know that book earned me The Call, and it never got a second read from NWS. So don’t be put off or downhearted if you don’t get a second read. It’s what you do with the feedback that’s important.

How do you set about your research?
My medical research is pretty easy as I still work in the field. I have lots of hands-on experience, but now work in public health where I have lots of access to consultants in different specialities. Other research, like regarding the White House Medical Unit required some online email research and searches. My only real concern is that medical treatments can be different in the UK, US and Australia. I have a critique partner from the US and that can help if I have a story set there. 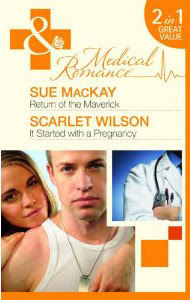 Tell us about your latest book, and how you got the idea for it.
My first Mills and Boon medical release is called IT STARTED WITH A PREGNANCY. It’s about Missy, a diabetic midwife who has a one night stand with a colleague and ends up pregnant. Missy is a control freak and finds it really difficult when she starts to have hypoglycaemic attacks with no warning signs when she’s pregnant. Cooper Roberts lost his wife and baby daughter to a pregnancy-related complication a few years before. He is horrified that his first foray back into the land of dating ends up like this – a woman with a high risk of potential pregnancy complications.

Can you tell us something of your work in progress?
I’ve just finished my third manuscript for Mills and Boon medicals. This story is about Amy and Lincoln. They met five years earlier on an Amazon Aid Boat and had an amazing affair. Five years later Amy turns up looking for help – she’s pregnant and suffering from pre-eclampsia, Lincoln is the best neonatologist she knows and she wants him to look after her baby when it is delivered early. This book focuses heavily on the topic of a young woman who has suffered from breast cancer and the emotional journey she is on.


A copy of Scarlet’s book will be given away to one of the commenters.

Find out more about Scarlet Wilson at her website: http://www.scarlet-wilson.com
Posted by Freda Lightfoot at 11:00 PM

Hi Scarlet, I'm half way through 'It Started with a Pregnancy' and it's great, really well layered with huge amounts of depth. The presidential books sound fascinating, congratulations on a fab idea!

Greatly enjoyed reading more about you and your writing journey, Scarlet (I'm on the west coast too!). Sounds as though your career with M&B has really taken off. I do admire you getting on so well while working full time!

Yes, I agree - working full time while writing is massively impressive. I write full time, which means I spend about an hour writing and the rest of the day on Twitter. Perhaps I should get a 9-5 job? It could improve my prospects, lol.

Best of luck with your next book!

Thanks Cara. Have to say, I'm absolutely terrified to know whether you are going to like it or not!

Hi Rosemary, I think I know you from another loop - should I call you Romy?
I definitely don't have enough hours in the day and my sons have a better social life than I do!

Elizabeth - what I didn't admit in the interview is that I'm very easily distracted. So, telling myself I've only got half an hour makes me stay extremely focused!

Hey Scarlet - great to learn more about you. LOVE the sound of book three too :)

Hi Rach, thanks very much. Now off to worry about Book 4!

My son picked a winner. Rosemary do you want to send me your address via the contact form on my website and I'll send you a book, thanks Susan

I get great ideas lying in the dark too. Something about turning off all the senses, I think.

Wow, 1K in a half an hour is awesome! Loved the interview!!