Linn B Halton talks about research 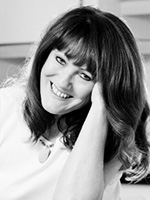 Research is probably one of the most time-consuming factors when writing a new story. Sometimes it’s relatively simple—searching online to check factual things. I found myself researching the subject of subdural hematomas when I wrote my first manuscript.

For another book the setting was of paramount importance and that meant having detailed knowledge of an old water mill, including the internal layout and surroundings. That was fun as I simply spent a few days re-visiting places I’d been before. I then roughly sketched out my composite building in terms of the internal layout and a few very basic exterior elevations that I could refer back to as the story developed.

In my latest book it’s all about angels and I’ve been researching that for a long time because I’m fascinated by the subject. However, it also involved me attending two Gayatri mantra sessions for one of the chapters. It’s one of the oldest and most powerful of the Sanskrit mantras. It is believed that by chanting the mantra and connecting with it, it will help you carry out the work that fate has determined for you. Your life will be full of happiness as you fulfil your true destiny. The Gayatri is considered to be the essence of the Vedas (knowledge). The mantra is a gift to help us all, like a third eye revealing the inner vision.

Both sessions were held in a church hall in Nailsworth, Gloucestershire. I was rather surprised at the empty and large open space I found on entering the building. The vaulted ceiling and lack of furniture meant that simply walking from one end of the room to the other, every footstep echoed around the entire hall.

It was a small group of people and everyone was attending for the first time, although we all returned for a second session a month later.

We formed a circle of chairs in the centre of the floor. We were given a sheet with some information and the mantra we were going to chant.

Santhi (peace to your mind, body and soul)

We were shown how to sit—feet flat on the floor, arms relaxed and palms facing upwards. I will admit I wasn’t entirely comfortable with the idea of chanting and wondered whether I would end up leaving. It began with a demonstration and the first time I heard the chant performed by just one voice, it was amazing. We made a start and it took a little while until we felt comfortable hearing our own voices and everyone found the right pitch. Then it began in earnest.

It was a beautiful thing. A group of strangers suddenly found themselves chanting in unison and the sound within that enormous vaulted room was nothing short of magical. After chanting for a while we stopped and were guided through a meditation. That in itself was a whole different experience.

Angels by Linn B Halton e-book Releasing on 6th July, 2013 this is part one in a series of three novellas about Ceri’s journey - Angels, Truth and Decisions. 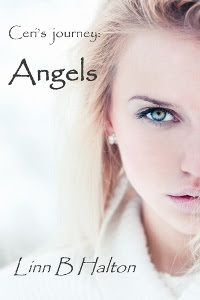 Ceri thinks she sees angels…everywhere. She struggles to keep separate what feels like two very different sides to her life. As a manager in an advertising company she’s been working with the gorgeous Alex for two years. The have a friendship based upon the image she portrays whilst she’s at work and it helps to keep her sane. One mad, crazy night spent sharing their secrets and a lot of wine result in them ending up in bed together and their relationship changes. When Alex explains that the reason he doesn’t date is because someone broke his heart, how can Ceri admit that she feels a deep connection to him?

Ceri's purpose here on this plane is to correct a series of incidents that alter the course of many of the people's lives with whom she comes into contact. She’s simply putting right little errors that could ripple outwards and change the course of their destiny. But how can she prove that she really has made a difference? Is it all in her head?

She's alone for a reason; she's not meant to fall in love in her earthly life. Alex is supposed to cross paths with her and help Ceri during a phase where she begins to question the signs she’s being given. It's meant to be a turning point for them both—but in opposite directions. They are destined to travel very different paths…but Ceri doesn’t know that and neither does Alex…


“No one chooses to see angels, why would they?”

This is a romance story that explores the possibility of there being something more than just the ‘here and now’. If that were the case, how would it work? What keeps us on the path determined for us, when we have free will? How would the spirit world link with us as we go about our lives? Love is a powerful emotion, but can it change the course of someone’s destiny? Ceri’s journey has begun.

What a fascinating post, Linn - and the book sounds equally so. Love the way you've researched the experiences.

The book is absolutely amazing. I can highly recommend it. x

I can't wait to read Angels and I know how much research and personal experience goes into all your books, Linn! Happy Launch Day for Sat 6th July!

What a facinating post, Linn. I must admit to enjoying research (perhaps a little too much sometimes)and your research for Ceri's Journey is certainly a little different!

I really enjoyed reading the first part of your trilogy and know how you've used this mantra experience in the story - it is very effective yet lightly done.

I can't wait to find out what happens next and how the love story develops in the next part.

Love the cover of your book, so elegant. Wishing you every success, which you so deserve.

Thank you Rosemary, it's easy researching something you genuinely find of interest. I felt surreal, but fun! Thank you JB - your feedback on the arc was really appreciated! Thanks Janice and Mandy - so excited. And Sue, love the description 'elegant' - I feel the same way but that word hadn't popped into my mind! You hit the nail on the head... Thanks all for dropping by - I feel like it's my birthday! Lxx

Now I'm tempted to try it. We could all use a little guidance, after all. Linn I loved your first chap. I'm poised to purchase on RELEASE DAY. I love your writing and hope you do fabulously well. I know how very hard you work to get the detail right. You're also a very supportive person to other authors. Well done you - and best of luck! :)

How intriguing! I can see you in that church, Linn, it must have been truly beautiful. I can't wait to read Angels!!! Thanks for sharing your research notes. :-)

Thank you Sheryl! All good karma gratefully accepted and thanks so much for your kind words. Waves, Nicky! It was an experience that is beyond words, you had to be there to experience the sense of connection. I only knew one person there, everyone else was a stranger but at the end - and without much conversation - we felt like 'one team'. I'm the richer for the experience. Lxx

Excellent post about research, Linn, with important points to be shared. Your chanting experience sounds like it was truly "divine". I can feel it in your words. Happy Launch Day! I know Angels is going to be another great success for you ... and well-deserved!

Thank you for dropping by Patricia. I never fail to be surprised by the new experiences that continue to come my way - there's never a dull moment, that's for sure!

I agree Linn- researching a new book is very exciting and does not feel like work when it is something that you are passionate about. I am off tomorrow to research the location for a new book I am writing. It's a country house fairly close to where we live called Avington Park in Hampshire. I'm really keen to go and see the building and feel the ambience of the place.... but it will be a challenge in my current state - hoping there are plenty of seats and not too many stairs. I have started a secret Pinterest board for all my locations, clothing, cars, food and objects that feature in the book and find it far too much fun!

Congratulations on your very well researched book - I am looking forward to the next book in the trilogy.
Emma x

Thank you Emma - it was fun and not work at all. Your project sounds like fun - can't wait to see your Pinterest board!