All Roads Lead To York!

On behalf of members of the Romantic Novelists’ Association, your intrepid bloggers set off for a long weekend in York, the highlight being the Tea Party at the Guildhall organised by Jane Lovering and Lynda Stacey. Two trips to Betty’s, a cruise on the Ouse and many miles walked around York and we are home and exhausted.

Thank you to Jane and Lynda for the following words and John Jackson for the images.

It was a cold, windy day in York, but inside the Guildhall it was warm. More than ninety people came to the first RNA Afternoon Tea event, and of those, more than half had never attended an RNA Party before, so we were delighted that so many were prepared to come to York as their first introduction to partying, RNA-style!  They were greeted by glasses of Prosecco and the chance to mingle and chat, helped by the familiar RNA name badges and lanyards, which meant nobody had to ask that awkward question ‘I’m sorry, who are you?’ 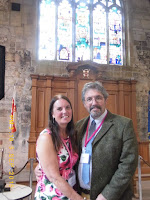 Grace was said by Kelvin Woolmer, husband of RNA Chapter Liaison, Jean Fullerton after which we drank tea out of vintage cups and saucers and ate sandwiches, savouries and cakes from gorgeous vintage china. The setting in the beautiful fifteenth century York Guildhall, with its vaulted ceiling and ancient beams was awe inspiring.
﻿
Milly Johnson, who gave a very funny talk on the subject of ‘The Northern Bird’, filled with 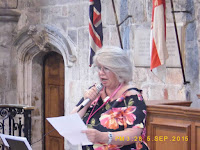 scurrilous remarks and observations. She then performed her own parody of the well-known Robert Burns poem, with her ‘Address to the Scone’, followed by the delivery to the tables of heaps of scones, with clotted cream and home-made jams.

The proceedings closed with a rush to the Pic n Mix table, where guests helped themselves to sweets for the journey home. Thanks to everyone who came, and to John Jackson for documenting the event so thoroughly in photographic form!

Thank you, Jane, Lynda and John.

So where to next? Cornwall, Scotland, Wales or the South Coast? It will soon be time for another RNA event. In the meantime don’t forget the RNA Winter Party on Wednesday 18th November at the Royal Overseas League, Park Place, London. Click here for details and booking form.

Fabulous day and well done to Lynda and Jan for all their organisational skill and cakes.

It was a great event - thanks so much to all who organised it!

Sounds a tremendous day. Fantastic that 45+ RNA members had such a ball at their first RNA party. Great work Jane and Lynda.

Sorry I missed it but ducking out of family weddings is a high risk activity.

I had a fabulous day. Thank you so much Jane, Lynda and John, you did a great job. When you said there would be plenty of delicious food (the lightest scones I've tasted, yum) and endless cups of tea, you meant it. Roll on the next one :)

It sounded fabulous. Had I not been in Portugal, I would have joined you. Many thanks for the accounts of the day, and to John for the great photos. xx