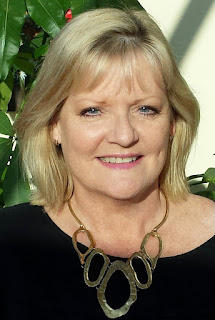 Georgina Troy is lucky enough to live on the beautiful island of Jersey where her books are based. We were delighted to have the opportunity to interview her

We understand your third book with Accent Press has just been published…congratulations. How did you and your publisher get together in the first place?
It was August 2014 and I’d just turned down a contract with another publisher when I received an email from Accent Press saying that they would be very interested in taking on my Jersey romance series. At that time I’d written and self-published the first two books, which have now both been edited and republished by Accent Press. They also signed me for a further two books. A Jersey Dreamboat (The Jersey Scene book 3) was published by them earlier this month. The fourth book in the series, A Jersey Bombshell has been written but has yet to be edited. It’s been a wonderful experience working with Accent Press, a publisher I’ve long admired, and I’ve learnt a lot.

Your books are based on the beautiful island where you live but, apart from the setting, what else gives you inspiration?
Things that have happened in my life and that of my family and friends have inspired a few of the stories. For example, a close friend and I went to a joint birthday party and met the two brothers of one of the hosts; they invited us to go on a cruise in the South of France. The brothers turned out to be Counts and we spent the first few days of our trip staying in their family chateau. That holiday became the inspiration behind A Jersey Dreamboat.

If your home was burning down what would be the one object you would strive to save – and why?
Apart from the obvious family and pets, it would have to be the portrait of my grandmother painted in 1967 by Vasco Lazzolo. He was a friend of Stephen Ward and despite threats agreed to give evidence on his behalf in court during the Profumo Affair. 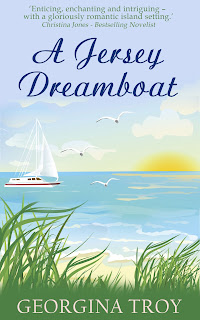 Tell us about your writing regime. Are you a full-time author or do you have to fit your writing around a ‘day job’?
I work 27.5 hours a week. I did work full-time until January, but my boss very kindly let me reduce my hours to give me more time to write the two books I’d been contracted to submit. I usually get home at around 3pm, take a bit of a break and then get on with writing whatever it was I’d intended to do that day. I like to write at least 1,000 words each day, but usually write between 1,500 and 2,000 words when I’m writing a first draft.

Do you have a writing ‘space’ or can you write anywhere?
I can write anywhere. At the moment it’s at the dining room table. In the summer, I tend to write in the garden, or maybe in a local park in St Brelade’s Bay.

Tell us one thing that's on your bucket list.
To visit India where my grandmother was born and lived for the first few years of her life.
Thank you very much for interviewing me for the RNA Blog.
Georgina

Biog:
Georgina Troy lives on the island of Jersey and can see the lights in France at night from her bedroom window. This isn't surprising as Jersey is only fifteen miles off the French coast. She lives near the sea, then again most people live fairly close to the sea in an island only nine by five miles in size. She's an impossible romantic and likes nothing more than creating gorgeous heroes. Her books are published by Accent Press.

Thank you, Georgina, for joining us today from the sunshine island of Jersey.

The RNA blog is brought to you by
Elaine Everest & Natalie Kleinman
If you would like to write for the blog please contact us on elaineeverest@aol.com

Georgina, you sound both disciplined and highly productive. Jersey is so beautiful, too, you must never run short of inspiration. Thanks for this very engaging post.

Thanks very much for inviting me onto this great blog, I've thoroughly enjoyed answering your questions.

Gabrielle, thank you for your lovely comment. I do try to be fairly disciplined but it doesn't always work that way. Yes, Jersey is lovely and

Super post. Relative newbie to Jersey myself Georgina. Love the island, and love your books :D