FOCUS ON: The Cornish Chapter

Today we are delighted to welcome Brenda Hawkey to the blog as she tells Natalie Kleinman about getting a new Chapter ‘off the ground’. 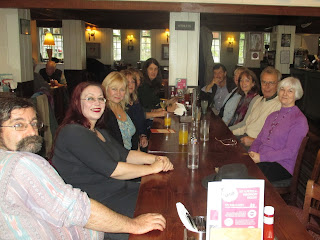 Congratulations on starting a new Chapter. What do you call it and why do you think it’s important for Cornwall to have its own Chapter.

has a long history of producing and inspiring writers, but what makes the county so beautiful and popular with tourists, i.e. its small villages, rural countryside and almost completely surrounded by sea, can pose as obstacles to keeping in touch with fellow writers.

I live in North Cornwall, so, when I joined the NWS in January, I was able to drive the sixty miles to the Exeter Chapter, where I gained a lot of support and made new friends. Despite the long car journey I was aware I was one of the lucky ones as writers who lived further southwest had an even longer journey to make. needed its own group and when I discovered I was not alone in thinking this, I thought I’d attempt to start one.

Is this the first time has had a chapter?
No, there was one in 2000 which lasted a couple of years. Chrissie Loveday held most of the meetings in her house as there was plenty of parking. Initially it was well attended, sometimes as many as 16 people, but sadly it came to an end when numbers began to dwindle.

How did you get it started?
I made a list of all the RNA members who had expressed an interest in attending a Cornish meeting and added them all to a single Facebook group conversation. The conversation quickly took off and a date, time and venue were soon agreed by all. After the first meeting, I started up a Chapter Facebook Group and invited interested members to join. I also announced it on the RNA Facebook page, the ROMNA Yahoo group and informed the RNA to make it official. It was easy to start a Chapter Group, but from now on it needs its members’ participation to keep it active.

How did the first chapter meeting go?
I don’t mind admitting that I was a little nervous that no one else would turn up, but I need not have worried. We arranged to have our first meeting at The County Arms in . However, it takes courage to walk into a pub on your own, and it’s a strange experience to meet people you have never met face to face before. It also feels odd to ask another person (who is looking equally lost) if they are a member of the RNA. One feels like an undercover spy making contact with another agent. The only thing missing was the handing over of a package marked Top Secret. However, we managed to meet up successfully and because we had something in common, conversation began to flow very easily. Seven members attended the first meeting. It was informal and fun, and there was a nice mixture of traditionally published authors, indie authors and members of the NWS. I wouldn’t be surprised if we ended up being the noisiest table!

How often do you meet?
At the moment, the core membership is small, so we have decided to meet every other month. This may change in the future, but at the moment it is the 4th Thursday on alternate months ie Nov, Jan, Mar, May, Jul, Sept.

Where is your regular meeting place?
At present, the regular meeting place is The County Arms, Highertown, at 12.00 midday. We chose this inn because it is centrally located, the parking is plentiful and free, and it serves affordable, tasty food. The railway and town centre is a 10-15 minutes walk away, making it ideal for a bit of retail therapy after lunch. The meetings are more akin to an informal lunch date with friends and the topics are on whatever we want to chat about at the time.

However, this venue may change in the future. The Cornish Chapter is new and willing to evolve to meet the wishes of the majority of its members.

Is your chapter open to non-members of the RNA?
Yes, I feel we need to be inclusive towards anyone who has a passion for writing as our core group is quite small compared to groups in more urban areas. Therefore, at the moment, the lunch dates are open to non-members who have been invited by a member.  However, The Cornish Facebook Page remains a closed group for members of the RNA in order to provide a safe and intimate group for discussions.

What do you have planned for the rest of 2016?
I hope that it will grow from strength to strength. has lost its chapter group before, so we are aware that chapters can fail as a result of dwindling support. Unfortunately, once lost, it may not return for several years. It took over a decade for another chapter to form in Cornwall, so it would be a shame to lose it again.
What would you say makes your chapter of the RNA so special?
At our first meeting we discovered we had more than just writing in common. We discovered we all share a love for and feel very lucky to call it our home. Its geography may make us feel a little isolated at times, but we are determined not to allow it to have a detrimental effect on our writing careers and to use its uniqueness to enhance our novels as our predecessors have done in the past. So it appears we share the same muse, , and that is something quite special.

What are the key elements to starting a new group?
Someone willing to start one. It takes a little time, but not as much as you would expect.
People willing to join.
Choose a good location. It will not be perfect for everyone, but it should be considered “good enough” for most. Compromise is the key word here.
Good communication is a must and should remain a priority.

Who is the contact for new members?
Brenda Hawkey
Email address: BDHawkey@hotmail.co.uk

We welcome new members, so please feel free to contact me if you would like to join.

Thank you which is  Meur ras in Cornish.

I have found your answers inspirational, Brenda, as I am sure our readers will too. Good luck for the future. It obviously won’t be for want of trying! 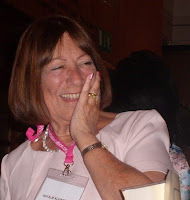 Natalie has been writing for sixteen years and her first two novels, Safe Harbour and Honey Bun, were published in 2014. Her third is with her agent, Lisa Eveleigh of the Richford Becklow Literary Agency. She is currently writing a Regency-based romance and wishes she could live between the pages of her book if only to wear the beautiful dresses that were fashionable at the time. You can read about Natalie’s achievements on her Blog.

Would you like to write for the RNA blog? Please contact us on elaineeverest@aol.com
Posted by Natalie Kleinman at 7:00 AM

Congratulations on re-establishing a Cornish Chapter, Brenda. Some creative ideas that might work for a Scottish Chapter - meeting every second month and inviting non-RNA members to join.

Lovely to read all about the chapter and I hope one day my visits from Nashville will coincide with a meeting!

Thank you, Rae, for your good wishes. Angela, we have a seat with your name on it waiting for you!