So many of us have memories of making our own clothes and being taught how to sew whilst still at school. But what about the ladies who worked in the rag trade when it was a thriving business during the war years? We are thrilled to welcome Kate Thompson to the blog to tell us about these ladies and how they became the focal point of her novels.

How long have you been writing novels and do you write anything other than novels? 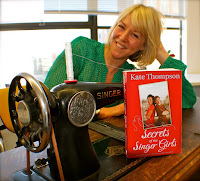 I’ve been writing novels for Pan Macmillan for two years now and Secrets of the Sewing Bee is my
second book. I was thrilled to sign another two-book deal with them for titles to be released in 2017 and 2018. Prior to fiction I was ghostwriting memoirs for publishers like Penguin and Simon & Schuster. I combine writing with work as a freelance journalist for newspapers and magazines.

How important do you feel it is to have an agent?

How important is it to have a solicitor when you move house, or a locksmith if your key snaps in the door? To me, it’s vital. Agents handle all the tricky, complex negotiating, with a view to getting you the best deal and importantly when it comes to brokering book deals, they act as a buffer between you and the publisher. If you’re someone like me, who is uncomfortable talking about money and couldn’t negotiate her way out of a paper bag, then having an agent whom you like, trust and respect, is well worth it. For me, it also goes beyond sheer financial value. I talk through plot lines, brain storm ideas, discuss covers and chat through all aspects of writing with my agent Kate, usually over tea and cake or wine!

As a writer of historical fiction how do you undertake your research?

I like a three-pronged attack! First hand testimony archives and interviews with historians or experts in their field, to provide a complete overview. For example, I’m researching a book now set in 1936 in Whitechapel, in a photographic portrait studio. The narrative encompasses rent strikes and the Battle of Cable Street.
In order to research this, I visited the Stepney Jewish Club where amazingly I found three incredible women, all in their late 90s, all very smart and sharp, who recalled with clarity their involvement in the Battle of Cable Street. It was a total revelation to me. I assumed, wrongly, that women would not have been out in force on the day fighting the fascists, but these women set me straight in no uncertain terms. Beattie, now 98, told me how as a young Jewish woman she was chased down her street by fascist Blackshirts, who whipped her with belts and screamed at her to go home. ‘I am home,’ she told them, before outrunning them. Politics was personal to Beattie. Soapbox orators were on every street corner and getting involved in marches and the huge fight to stop Oswald Mosley marching through the East End, was about a fight for freedom and a just society.
Hearing a first hand testimony like that brought my novel to life and when I wrote the Battle of Cable street scenes in, I was seeing it through Beattie’s eyes, listening to the great roar of the crowds and feeling their jubilation when they forced Mosley and his Blackshirts to turn back. I left that interview on an absolute high because for me, history had just burst into life and I knew it would directly impact my writing. I am endlessly fascinated by the women of the 1930s and ’40s and how war shaped their lives. Whenever I am offered an interview with a woman, or man, who can recall those times I jump at the chance. They are voices that demand to be heard. First hand memories like that will not be around for very much longer so it's so important we listen.
I also visit archives extensively and if there are random questions I need answering, like what camera would a 1930s portrait photographer have used, I call up museums and historians to fill in the gaps. People are always so incredibly helpful and in the main friendly. I’ve had one or two people say they haven’t the time to help, but that’s a rarity. It’s a fine line though between doing too much research and then feeling the temptation to pile everything you’ve unearthed into your book. I always have to remind myself that it’s the characters and plot, which should drive the book forward. Dividing time between research and writing is a constant balancing act, and one I’m still figuring out.

Can you tell us more of how you came to decide on the theme of sewing?

When I started Secrets of the Singer Girls I decided to set it in the East End rag trade, more specifically a garment factory, which makes and repairs uniforms for the troops, as that seemed to me to be a largely untold story of the war.
When it came to writing the prequel it made sense to stick to the theme of sewing, especially when I found out the huge contribution that sewing circles made to the war effort.
The irony is I can't sew for toffee! When I wrote the books I had never so much as sewed on a button. My publisher recently arranged a visit to the Singer Sewing School in London where I was videoed making a tote bag! I found the hum of the sewing machine surprisingly therapeutic, not sure the finished article would have made it past a 1940s factory forelady mind you!

You have hit upon important historical events in your stories. How important do you think this is to your readers?

There is a fascination for little known events of the past and I think people really like it when you bring to light something they had never previously heard of. When I wrote about the Bethnal Green Tube Disaster, where 173 people, mainly women and children, were crushed to death hurrying to take shelter during an air raid, I had so many letters from people saying how stunned they were that they had never heard of this event and how moving they found it.
One woman even told me how she was reading my book as she travelled through Bethnal Green on a bus and she reached the scenes of the crush, just as the bus drew level with the entrance to the Tube. She says she was flabbergasted and it made her reassess the way she views the East End today. The way people pitched in to help, with boy scouts working alongside housewives in aprons to free the dead and injured, brings a human tragedy into sharp focus.
Knowing that an event you’re reading about in a novel actually happened, albeit to fictional characters, has the power to move us and make a novel memorable. It also helps to bring a fresh perspective to an event that may have become clichéd in the retelling. I absolutely loved Hazel Gaynor’s, the Girl Who Came Home, about a young Irish woman who survived Titanic. There were so many small details in there that made me see the tragedy in a new light. It was also so beautifully written and evocative, I had to watch Titanic the film again!

I do use Twitter, but I don’t get the same enjoyment out of it as Facebook. The people that read my books don’t seem to go on Twitter as much either so if I want to connect with readers and potential readers I reach out through Facebook. For me it's a brilliant way of reaching into women's minds and seeing what fires their emotions.
To give you an example, whenever I post up a lovely black and white nostalgic photo of children playing football on the cobbles, (jumpers as goal posts) conkers, or knock down ginger, it always gets the most extraordinary response and more likes/shares than any other post. Strangers start interacting and sharing their childhood stories and you see how much people truly love recalling their childhoods and the lost communities they were raised in. I always try to keep that in mind now and instill that nostalgia into my writing.
I also try to share photos and a few words about some of the amazing people I might have interviewed that week, which people seem to like and competitions are perennially popular. Having an on line community to reach out to for advice and to act as a sounding board, is really worth the time and effort it takes to manage it.

How do relax when not writing?

Relax, what’s that? I have two small boys and a dog to tire out daily. Relaxing for me comes when they are safely tucked up in bed, and I can sink onto the sofa with a glass of red and Call the Midwife, or get into my bed with a new book I’ve been looking forward to. I’m currently reading, and thoroughly enjoying, Elaine Everest’s brilliant new novel, The Woolworths Girls and after that I’ve got Iona Grey's, Letters to the Lost to look forward to. Maybe I’m old before my time, but a good book, a cup of chocolate Horlicks and a hot water bottle warming my toes and I’m happy.

What’s next for author, Kate Thompson?

I am about two thirds of the way through my third book for Pan Macmillan. This one is set in 1930s Whitechapel and focuses on women working in the wedding industry. Two of my characters work in a photographic portrait studio, photographing brides and the third makes wedding dresses.
The East End was grindingly poor back then in the Depression, but despite that, or many even because of it, every bride wanted to look like a Hollywood movie star. Having a beautiful wedding portrait was a badge of honour, as was having the very best day your family could afford.
It was a time of stark contrasts and the illusion of glamour. The streets were full of danger, with fascist Blackshirts marching and the threat of war looming on the horizon, so young women lived for glamour and romance. 1936 was a helter-skelter of a year with the Depression, hunger marches, the abdication of the King and the Battle of Cable Street, providing a suitably dramatic backdrop to my character’s lives.

About Kate:
Kate Thompson is an author, journalist and ghostwriter. Her debut novel, Secrets of the Singer Girls, became a Sunday Times bestseller and is followed by the recently released, Secrets of the Sewing Bee. Kate lives in Twickenham with her husband Ben, their two sons, Ronnie (8) and Stanley (4) and an elderly Jack Russell called Twinkle. She is currently working on a third novel for Pan Macmillan, due for release in spring 2017.

If you would like to write for us please get in touch: elaineeverest@aol.com

A lovely piece, Kate. Good luck with the book. x

I really enjoyed this blog, even though London has never been part of my own background. I recall my parents talking about the events of those times and I like real events in fictional novels.