Anne Allen: Writing about a place you love

Today we welcome Anne Allen to the blog to talk about her Guernsey Novels series and the influence of the island she loves on her writing.

Anne Allen lives in Devon, by her beloved sea. She has three children, and her daughter and two grandchildren live nearby.  Her restless spirit has meant a number of moves which included Spain for a couple of years. The longest stay was in Guernsey for nearly fourteen years after falling in love with the island and the people. She contrived to leave one son behind to ensure a valid reason for frequent returns.
By profession, Anne was a psychotherapist, but long had the itch to write. Now a full-time writer, she has written The Guernsey Novels, five having been published and the sixth, The Betrayal, is due out on 20th October 2017.

I first visited Guernsey, the subject of all my novels, in 1987 and immediately fell in love. Not with a man, dear reader, but the island. The man came much later… At the time I was a single mother of three young children and worked as a psychotherapist, with no time or much incentive to write. I moved us all to Guernsey a year later, the beginning of a life-long love affair.
Fast forward fourteen years and I’m back in England, missing the island and having left No 1 son behind as a reason for frequent returns. A couple of years later and my last child left the nest and I decided if I did want to write that novel, now was a good time before the brain cells atrophied. Encouragement came in the form of winning a 500-word true-life story competition in Prima magazine. The prize was £500 in M&S vouchers meaning I was well-fed and well dressed during the following months of scribbling.
For me it was a no-brainer to choose Guernsey as my setting for a story. It has all the necessary attributes: beautiful scenery, including golden beaches; fascinating history from Neolithic times; numerous bars, restaurants and cafés for my characters to frequent and a couple of smaller islands nearby offering a change of scene. Add to that a tragic and mysterious boating accident and an old cottage with secrets and ‘Dangerous Waters’ was conceived. The birth took considerably longer than nine months as I wrote and re-wrote the ms, finally joining the NWS scheme on the advice of a friend, Anne Weale, a former RNA president. In spite of all the help I received, I was unable to attract an agent and finally self-published in 2012, through Matador.
My next book, ‘Finding Mother’, was also set predominantly in Guernsey but at this point I hadn’t twigged this was becoming a series, even though characters from the first book popped up in book two. Duh! However, I did set up my own imprint, Sarnia Press, and re-published ‘Dangerous Waters’ under that imprint. A year later I published ‘Guernsey Retreat’ and a series was now established – The Guernsey Novels. I had the covers redesigned to create a branding and each cover has a recognisable (to those who know!) Guernsey scene.
Guernsey, like the other Channel Islands, was occupied in WWII by the Germans, and this has had a profound effect on both the landscape of the island and the psyche of the Islanders. I’ve been drawn to focus on this in all my books, often using something which happened during the Occupation as having a knock-on effect on present-day characters. For example, love affairs ending in tears crop up in some books, influencing the doomed lovers’ descendants.


Although the books are a mix of family drama and mystery, there is always a romantic thread, as befits a proud Independent Member of the RNA. This is true of my latest title, ‘The Betrayal’, my second dual-time novel set in both the Occupation years and the present.  Two separate historical facts inspired the story: Renoir’s visit to Guernsey in 1833 when he painted numerous views of Moulin Huet Bay and the forceful deportation of Jews on Guernsey to concentration camps by the Germans. I’ve intertwined the two by having my WWII character, Leo, of Jewish descent, own an unrecorded  Renoir painting of Moulin Huet, which turns up in a basement over sixty years later.

Thanks to Anne for that great insight into how Guernsey inspires your writing.

Anne's latest novel is The Betrayal 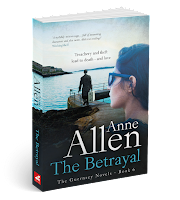 Treachery and theft lead to death – and love
1940.  Teresa Bichard and her baby are sent by her beloved husband, Leo, to England as the Germans draw closer to Guernsey. Days later they invade…
1942. Leo, of Jewish descent, is betrayed to the Germans and is sent to a concentration camp, never to return.
1945. Teresa returns to find Leo did not survive and the family’s valuable art collection, including a Renoir, is missing. Heartbroken, she returns to England.
2011. Nigel and his twin Fiona buy a long-established antique shop in Guernsey and during a refit, find a hidden stash of paintings, including what appears to be a Renoir. Days later, Fiona finds Nigel dead, an apparent suicide. Refusing to accept the verdict, a distraught Fiona employs a detective to help her discover the truth…
Searching for the true owner of the painting brings Fiona close to someone who opens a chink in her broken heart. Can she answer some crucial questions before laying her brother's ghost to rest?
Who betrayed Leo?
Who knew about the stolen Renoir?
And are they prepared to kill – again?

Lovely interesting read, Anne. Wishing you all the very best with your novels. Julie x

Great stuff. Really enjoy your angle and approach (though that does make you sound a bit like a pilot - soz!).

I've read all Anne's novels and they are a wonderful mix of mystery and romance. The Guernsey presence is truly a character in every story and I found Anne's descriptions of the islands as exotic as any tropical paradise. Love these books. Wish you every success with them, Anne.