Jenny Haddon: Planning With Other Writers

We welcome Jenny Haddon to the RNA blog today to tell us about her exciting project.

Hartshorne) of the RNA together with Montana-resident Anne McAllister, who has spoken at the RNA Conference, to write a four book series. We had all written for Harlequin Mills & Boon, though both Jessica/Pam and I hadn't done so for some time. We knew each other

Imagine delighted. The drawback was that I'd never written one of a series before. I'd written a couple of novels which turned out to have sequels sitting inside them. But I'd never planned a Book 1 of 4 from the get-go. Jessica, however, was firm. An overall plan was essential. We concluded that we needed four key resources, held in common on Dropbox and Pinterest.

The story that emerged was built around a Royal Wedding, to be held in a classic English village church. So the world of the series required the invention of a royal principality and an English village.

RESOURCE 1 - Royal Seat
I mostly invented the principality, since my hero was the royal in question – His Serene Highness Prince Jonas of San Michele. I could show you place on the Slovenian coast where I imagined the capital. I prepared notes on the principality's history from the middle ages to the present day, economy, geography and language.

OK, I'm a bit of a nerd on things like that. But it did mean that we weren't suddenly going to be throwing up history or traditions which were different from one book to the next.

In the spring Anne came to stay in England and we all visited Castle Combe which inspired the village, the manor house in which my heroine and Jessica's hero were born and the church where the royal wedding took place. We inhaled the atmosphere. We lodged notes, maps and photographs in our resource centre.

RESOURCE 3 - Backstory, ages and appearance of characters
We'd agreed most of the details before we started writing, especially during our girls' day out in Wiltshire. We kept facts in documents held at Dropbox. Though we still had to negotiate sometimes, by email of course, when we suddenly found something we wanted to add. It was astonishingly harmonious. On Pinterest we pinned photographs of people who inspired our characters. (My Jonas, to my surprise, turned out be a David Tennant lookalike.) Liz found the wedding dress, too.

RESOURCE 4- Timeline Spread Sheet
We started with the earliest action that occurred on the page in any of our books. Backstory and ages

were for individual characters were we set up spread sheet showing the timeline of serious plot points, where the characters were, which books certain scenes occurred in and ended with the latest.

There was one killer weekend where nearly every key character in everybody's book was in one place at the same time. We had to break the timeline down almost by the hour for that!

I have learned an enormous amount during this return to category romance, in the company of some of the best in the business - including our editor, author Kelly Hunter. Planning, and then keeping readily accessible records of decisions on time and place, are lessons now well and truly learned. About time!

PUBLICATION DAYS
Charmingly, the publisher has co-ordinated the launch of our books as closely as we tracked our plot encounters. 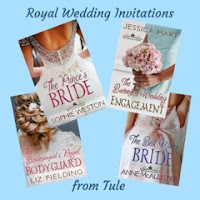 Thank you for your interesting piece, Jenny and good luck to you and your fellow authors.

If you would like to write for the RNA blog please contact us on elaineeverest@aol.com
Posted by Unknown at 12:00 PM

What a fascinating way to work, Jenny!

Am I hallucinating, or wasn't there a Notting Hill series? This sounds fascinating, even though I very rarely read category romance these days, but as you know, you, Liz and Jessica/Pam were three of my favourites from the old days. I might have to borrow your village...

What Sheryl said! What amazing collaboration.

Wow. I thought I planned and researched a lot but this puts me in the shade. I hope it does well for you. 😊

What a fascinating way to write, looking forward to reading the series, thanks for the post.