The RNA Industry Awards 2017 Celebrate those who Champion Romantic Fiction 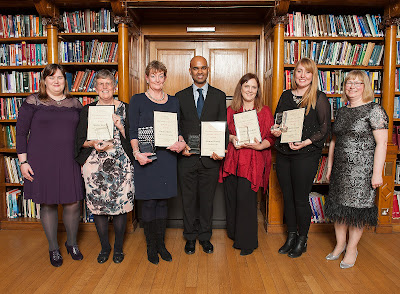 London: 15 November 2017 The Romantic Novelists’ Association’s (RNA) is delighted to announce the winners of its annual industry awards, which this year feature the addition of a new category, Librarian of the Year. This new award recognises the important work that librarians do in supporting the romantic fiction genre, and the Association in particular. Six awards were presented during the RNA’s Winter Party, held in the Library at the Institute of Mechanical Engineers in London.

Librarian of the Year
The inaugural award was presented to Shirley Everall, Audience Development Officer, Hertfordshire Libraries, for hosting a great number of events for RNA members, and promoting romantic fiction in Hertfordshire Libraries.
Runner-up Rachel Gee, from Tiverton Library, was nominated for her continual support and proactivity in promoting romantic fiction.


Runner-up was David Headley and team at Goldsboro Books.

Best Adaptation of a Romantic Novel
The award for best adaptation of a romantic novel, whether for stage, screen (TV or movie) or radio goes to Debbie Horsfield for Poldark Series 3 (BBC TV).  The adaptation must have been broadcast/screened from September 2016 through to the end of September 2017, at any time and for any duration.  After three series, Poldark remains a fantastic series with stunning scenery, excellent casting, and still stays close to the original text. It is one of those can't-be-missed programmes, with a charismatic but flawed hero and heroine.
Runner-up was Whit Stillman and Jane Austen for Love and Friendship, a film based on Jane Austen’s novella.

Media Star of the Year
Blogger Linda Hill was awarded Media Star of the Year for her continued support for romance novels through retweeting, reviewing and blogging. Friendly and professional, even when her TBR pile is overflowing, she’ll take more books on, going above and beyond the call of duty, and all with a smile. This award recognises those who have helped raise the profile of romance writing and/or the RNA in a positive way.
Blogger Kaisha Holloway was runner-up and was nominated for her great support for authors and her honest, detailed and reflective reviews which are constructively critical.

Agent of the Year
For the literary agent who has striven to support, mentor, nurture and promote their authors’ careers, the genre in general and the RNA in particular. This year’s winner, Broo Doherty, DHH Literary Agency, was nominated for her championing of romantic fiction and support for the RNA. With a list featuring several authors in the genre, she provides guidance and great support to her clients, being honest and tactful, as well as kind, supportive and savvy about romantic fiction.


Runner-up Rebecca Ritchie, AM Heath Agency, was nominated for her dedication, warmth and genuine passion for the genre. A great editor and all-round fantastic partner, a great listener, offering wise words and sound advice.

Publisher of the Year
For the publisher who embraces the genre, mentors writers to produce their best work, and is innovative, creative and visionary in the marketing and promotion of romantic fiction on every level.  This year’s award goes to Charlotte Ledger, HarperImpulse, for her tireless championing of romance novels at Harper Collins, giving many debut novelists their first break. Open and honest, she provides transparent dealings with those authors under her wing and many nominated her, citing that working with Charlotte is a team effort, and she has a real personal touch when it comes to developing writers’ careers.
Runner-up was DC Thompson, a stalwart and steady publisher of a great number of members over the years. Both The People's Friend and My Weekly magazines have pocket novel imprints and their editors have mentored and published RNA members over many years, following a long tradition of nurturing writers of romance.

The RNA Industry Awards are decided by the membership, with every member eligible to nominate within each category. The awards were presented at the RNA’s Winter Party at the Institute of Mechanical Engineers, Birdcage Walk, London on 15th November 2017.

Photos from the event will be available on The Romantic Novelists' Association's website in due course.

About the Romantic Novelists' Association

The RNA was formed in 1960 to promote romantic fiction and encourage good writing and now represents more than 900 writers, agents, editors and other publishing professionals.

Thank you so very much for my Media Star Award. I am delighted and immensely proud. Congratulations too, to all those nominated and shortlisted and to the RNA for acknowledging the work of all those across the bookish world.

Thank you, Linda, for all you do on our behalf! Congratulations again.

I come to this place every now and then. The LA venues are really nice, the crowd is full of regulars, and the food and drink specials are pretty good! The staff is great and really gets to know your name. Totally worth your time on any night for good food and drink.