Today we add a little bit of tinsel to the blog as we welcome Heidi Swain to talk about her experience of writing for the festive market. 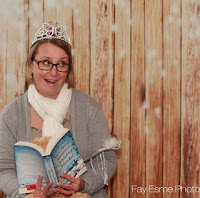 Although passionate about writing from an early age, Heidi Swain gained a degree in Literature, flirted briefly with a newspaper career, married and had two children before she plucked up the courage to join a creative writing class and take her literary ambitions seriously.
A lover of Galaxy bars, vintage paraphernalia and the odd bottle of fizz, she now writes feel good fiction with heart for Simon and Schuster.
Her debut novel, The Chery Tree Café was published in July 2015 (paperback June 2017) and Summer at Skylark Farm hit the shelves the following June. Mince Pies and Mistletoe at the Christmas Market was a hugely successful Christmas 2016 release and her fourth book, Coming Home to Cuckoo Cottage was published in July 2017. She is currently celebrating her October 2017 Christmas release, Sleigh Rides and Silver Bells at The Christmas Fair.
Heidi lives in Norfolk with her wonderful family and a mischievous cat called Storm.

Over to you Heidi…

When I set out to pursue my dream of becoming a published author there were a few goals I hoped to achieve. Seeing my books in a library, on the supermarket shelves, in the Bookseller and with an Amazon bestseller flag were a few, but the epitome for me was the opportunity to write a book specifically for the Christmas market.
With two books under my belt I was delighted when the chance came along and I grabbed the opportunity to start planning with both hands, but not before I had chatted at length to fellow authors, friends and a lot of readers.
The first thing I realised was that writing a Christmas book came with a heavy weight of what I call Reader Responsibility. That same responsibility is present at any time of year. For example, if an author has a book out during the summer and there’s a chance that it will be given the much coveted Holiday Read spot and packed along with the sarong and sunblock, that itself produces a pressure to tick certain boxes.
However, I soon became aware that throwing the word ‘Christmas’ into the mix was enough to crank that level of responsibility up tenfold. Not only because the book is being published at ‘the most wonderful time of the year’, but also because there’s the possibility, if the price is right (and let’s face it, with supermarket promos it more often than not is), that it will be deemed special enough to be given away as a present.
I hadn’t undertaken many pre-planning conversations before a common theme started to emerge. Lots of people objected to books which had ‘Christmas’ in the title, when they realised, just a few pages in, that the festive flourishes were going to be lacking and the big day itself barely mentioned, let alone made a feature of. If the cover was shiny, sparkly, glossy and glittery, the readers expected, desired, hoped for snow, sleigh rides and Santa himself and if they didn’t get it they felt let down. Many said they felt cheated and that the book which had disappointed them had only included ‘Christmas’ in the title as a way to increase sales.
And so, with this in mind, I made it my mission to not only write an interesting and plot driven book, but one which also centred around the snowy season and held celebrating Christmas as its heart. Mince Pies and Mistletoe at the Christmas Market was crammed full of festive makes, bakes, markets, workshops and gifts, but did my plan work? If the reviews and sales were anything to go by, yes it did and the fact that my editor called early on in the New Year to ask if I felt that Wynbridge had more winter cheer to offer was proof enough for me.

Second time around and I’ve written a book I think I love more than any of the others, but that could be simply because it is the current book on the shelves and I have developed a tendency to say that every publication day. However, Sleigh Rides and Silver Bells at The Christmas Fair delivers everything the title promises, along with a Solstice celebration, romantic encounters under the stars and more than the average number of trees.
The book has a new setting, Wynthorpe Hall, and a brand new set of characters to get to know, but one thing they have in common with their neighbours in town is that they love Christmas and know how to celebrate it in style. And, as if that wasn’t enough to cheer about, there’s the added excitement that my readers have also taken it to their hearts and turned me into a Sunday Times Best-selling Author!
I’m immensely proud to have reached another of my goals and I hope that if you have a festive book out this year then you’ve enjoyed the experience of writing it as much as I have.
Wishing you all a very merry Christmas and a productive New Year!
Heidi x

Thank you for that Heidi and a very merry Christmas to you too!

When Anna takes on the role of companion to the owner of Wynthorpe Hall, on the outskirts of Wynbridge, she has no idea that her life is set to change beyond all recognition.
A confirmed ‘bah humbug’ when it comes to Christmas, Anna is amazed to find herself quickly immersed in the eccentric household, and when youngest son Jamie unexpectedly arrives home it soon becomes obvious that her personal feelings are going all out to compromise her professional persona.
Jamie, struggling to come to terms with life back in the Fens, makes a pact with Anna – she has to teach him to fall back in love with Wynthorpe Hall, while he helps her fall back in love with Christmas. But will it all prove too much for Anna, or can the family of Wynthorpe Hall warm her heart once and for all...?
Join Anna for a festive journey that is festooned with sleigh rides and silver bells and help her discover her happy ever after.