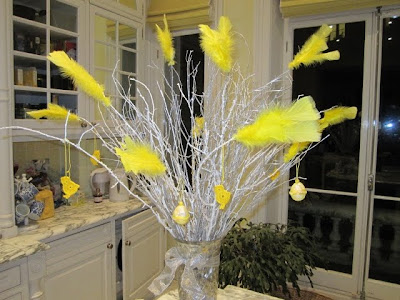 Novelist Pia Fenton aka Christina Courtenay tells us about her Easter traditions...

One of the nice things about Easter is that you get to decorate the house again. Not as much as at Christmas, obviously, but I love putting little fluffy chicks (fake I hasten to add), bunnies and even the odd lamb on the table and making a festive arrangement using twigs, feathers and a few other bits and bobs (see photo).

I’m not sure if this is a peculiarly Swedish tradition or if anyone here in the UK does the same? It’s just something we’ve always done in my family and I think it brightens the place up. According to Wikipedia, it could be something to do with commemorating Jesus’ entry into Jerusalem when the people spread palm fronds in front of him, but if I know the Swedes, it’s probably a lot more pagan in origin than that. It’s more likely to be a way of introducing a feeling of spring into the home and it’s really supposed to be done with live birch twigs so that the leaves open up adding some welcome greenery. Either way, I think it’s pretty!

Happy Easter to everyone! 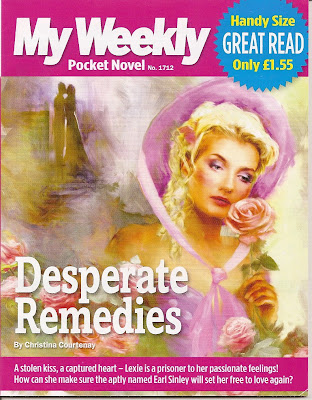 “Desperate Remedies” - My Weekly Pocket Novel No.1712 out this week

“What is the real story behind the handsome Lord Synley’s marriage to a woman as old as his mother? And will Lexie’s secret love for him ever be requited?”

Fabulous, Pia - I only wish I could turn "bits and bobs" into a decoration that stunning!

What a great idea, Pia. I've never made decorations for Easter, other than for a chocolate Easter Cake, but I thin I'll have a go, inspired by yoru lovely picture.

Here is a link to how i crew up in Sweden and celbrating as a kid. I love Swedish Easter decorations. http://delishhh.com/?p=772