Debut novelist Christine Stovell talks about the moment when she stopped letting others things get in the way of her writing and the importance of chocolate in her life... 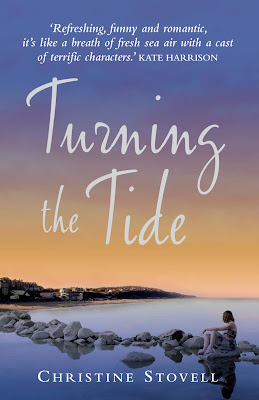 Holding a copy of my debut novel, Turning the Tide, for the first time was a thrilling moment. The result of lots of hard work, not just from me, but from everyone who helped to make my dream a reality. My book’s release was also tinged with a little sadness as it coincided with the fifth anniversary of my dad’s death. Maybe, if I’d taken myself seriously as a writer sooner, he might have seen a copy. As it was, it took the loss of someone who was so full of life to make me realise that time does run out.

I’d always written, but somehow The Novel never quite made it to the top of the list. Oh, I’d tried and failed to write a Mills & Boon, joined the Romantic Novelists’ Association and even got as far as attracting an agent in some early chapters of a novel I was working on, but I kept letting other things get in the way. Dad’s death made me reassess my priorities. I completed a novel that I’d thoroughly enjoyed writing then sent it to Hilary Johnson’s Authors’ Advisory Service for a professional appraisal and was delighted when Hilary liked it too.

After two very near misses, I had a Mystic Meg moment when I read in the book press about Sue Moorcroft being signed to Choc Lit. You see, it was winning a tin of chocolate at primary school in a national essay that started it all for me! It wasn’t just Choc Lit’s name that attracted me; I also really enjoy writing from my hero’s point of view so I felt that my novel would be a good fit for a publisher ‘where heroes are like chocolate – irresistible!’ Luckily Lyn Vernham, Choc Lit’s Marketing Director and the team at Choc Lit agreed.

Turning the Tide is based in a sleepy seaside town on the east coast. It’s the story of one woman’s quest to keep her father’s boatyard afloat and the town she loves unchanged. When a handsome property developer arrives with ambitious plans for the area and quickly gains local support, it looks as if thing can only go one way, but there are plenty of surprises ahead.

Choc Lit have wrapped my story up in the most gorgeous cover, but there’s one person who will never see it... if you’re reading this because you want to write a novel, take my advice – just do it!

Very poignant post, I am working hard on my novel now because I want my parents to see it, to hold it in their hands. They have at least read the first draft and now I am working on the edits. I want them to see that I finally made it. NaNoWriMo finally helped me get my novel written and now I am trying to get it finished. I wish you well with the promotion and sales of your novel. Sending a hug and TLC, Ardee-ann

Congratulations, Christine - and sending you a hug as your post really struck a chord with me.

Gorgeous cover and I love the premise - so am wishing you every success for the uture.

It struck a chord with me, too. My parents introduced me to murder mysteries when I was 9. I have now had 6 published, nearly 7, and neither they, nor my husband, ever saw them. And I'd faffed around just like Chris, writing everything else under the sun before being pushed into it a year after my husband's death.

I'm so looking forward to your book, Chris.

I'm so thrilled for you Chris and will be reading my copy this weekend. I can't wait.x

Ardee-ann, thanks for your good wishes and kind comments. You're ahead of the game because you've learned that to get it right you have to get it written. As Lesley says I faffed around for too long trying to get a perfect first draft and getting discouraged. Once I'd given myself permission just to write the story down and then work on it... well! Good luck! Cx


Kate, thank you very much for the hugs and your kind comments about Turning the Tide. Best wishes to you and yours too. Cx

Lesley, faffing round sums it up! I'm sorry if my post has stirred up sad memories for you. Congratulations on hanging on in there and achieving so much after being left with such a hole in your life. Thank you, too, for your kind words about Turning the Tide. Cx

Hi Chris. Beautiful cover. Your post really resonated with me. I lost my father five years ago too, and he would have been so happy to know I've finally sold a story.
I'm chocsessed. My blog is called love and chocolate and today I got my first ever cover, with chocolates on the front! Have a look...

Chocolate seems to be a major driving force for writing. My first effort won me an Easter Egg!