Louise Allen Shares Her To Be Read Pile 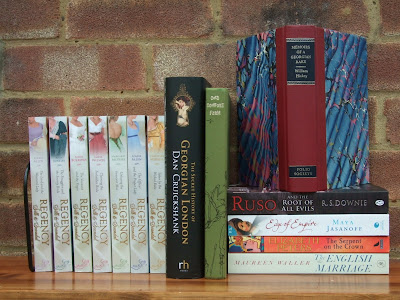 Louise Allen’s To Be Read pile…

...which probably should be called the Dipping Into All at Once pile because I keep picking them up and having a nibble, especially the research books.

Cold Comfort Farm is a re-read, and this is a lovely Folio Society edition with illustrations by Quentin Blake. I read another chapter whenever the wind howls and the central heating goes on - yet again - and laugh out loud.

Dan Cruickshank’s The Secret History of Georgian London is a sinfully rich read examining the way the 18thc sex trade influenced every aspect of life in London, even including the architecture. I’ve already been finding locations he highlights in Covent Garden including Constantia Phillip’s condom shop, Lovejoy’s Bagnio and the rather less temptingly named Haddock’s Bagnio.

I haven’t dipped into Maureen Waller’s The English Marriage yet beyond the opening sentence. “Foreign visitors to England were impressed by the status and freedom enjoyed by English wives and the courtesy shown them by their husbands.” Sounds promising!

For the work-in-progress I’m loving William Hickey: Memoirs of a Georgian Rake, in another handsome Folio Society binding. Hickey is a rollicking good read although I’m pretending I’m studying it for his recollections of life in Calcutta at the turn of the 18th/19th centuries and not for his revelations of a misspent youth. Edge of Empire: Conquest and Collecting in the East 1750-1850 by Maya Jasanoff promises to give me plenty of inspiration for the book after the book after next, which is beginning to bubble away at the back of my mind.

For reading in bed I’m catching up on the Elizabeth Peters Amelia Peabody novels which I unaccountably lost track of over the past few years and was prompted to start reading again by a holiday in Egypt. The Serpent on the Crown promises to be an exciting mix of Egyptology and crime. Another crime novel is Ruso and the Root of All Evils by R.S. Downie. I discovered this Roman detective last summer in my holiday reading pile and I’m looking forward to another unusual mystery.

But all other fiction is on hold while I read the eight volumes of Regency Silk & Scandal, the new historical continuity from HMB. I wrote 1 (The Lord & the Wayward Lady) and 7 (The Officer and the Proper Lady) of this eight-part series, but because we were all writing simultaneously I haven’t read the other titles by Christine Merrill, Julia Justiss, Gayle Wilson, Annie Burrows and Margaret McPhee yet. Although we planned the series closely together it will be fascinating to see how six voices carry the overarching story through the eight individual novels. They are out June 2010-January 2011 and the UK edition has additional research articles as well. 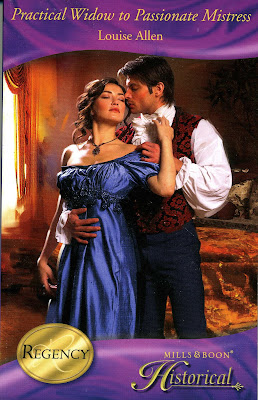 Louise, you are sending me back to Cold COmfort Farm right now.

I was trying to explain to someone last week why I had trouble with a prize winning novel. 'I didn't trust the author,' I said. 'It felt as if she was preening with one eye on the audience,' I said.

Of course, what I should have said was 'It was three star flap doodle!'

CCF - well the novelist's version of those initials - here I come!

Oh, all that sounds wonderful! But when do you find the TIME to read?

Which reminds me, must go hunting for TL&TPL this morning.

Love your TBR pile, Louise, especially Cruickshank and Waller - now temped to find the others on your list, too!

And everything kept so neatly, too (or did you tidy up for the camera????)

I swore I wasn't going to add to the TBR pile, but the Dan Cruickshank sounds too tempting.

I didn't 'get' CCF when I first read it as a teenager - obviously too young for irony - but now it's a favourite.

A stray cat wandered up to the house the other day, and since he was spotted like a cow and had a limp, I told everyone that his name had to be Feckless.

They told me to stop naming strays.

We have something nasty in the woodshed as well.