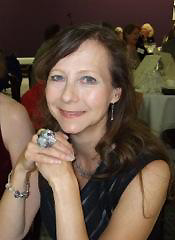 I am delighted to welcome Henriette Gyland to the blog today. Henriette grew up in Denmark and studied Modern Languages at University of Copenhagen. However, she was always attracted by London's bright lights, and after graduating decided to try her luck in England. But only for a short while. That was the plan. Then she met Him Indoors, and that plan was shot to pieces. Instead she set herself up as a translator and linguist, before turning to writing.

Henriette writes dark, romantic suspense novels and loves giving troubled characters a happy ending. She also assists with the annual RoNA Awards, and is a member of the Historical Novel Society. Welcome to the Blog, Henriette, do tell us what was the first thing you ever wrote, and did it launch your career?

As a child I was always making up stories, to the extent that I sometimes didn't know where reality ended and fiction began. This got me into a lot of trouble, so my mother suggested I write down my tall tales instead. The result was a 12 page picture book about two orphans girls who run away to Egypt but just happen to be adopted by a lovely new family they meet on the Orient Express. And, er, no, it didn't launch my career.


Were you in the NWS before getting published, and did you find it helpful?

I was in the NWS for about 12 years before I found a publisher, and the advice and support has been invaluable. The lovely readers taught me that even made-up stuff needs to have a beginning, a middle, and an end, not to mention believable characters, good dialogue, and proper spelling and punctuation. Perhaps this sounds a bit like Creative Writing 101, but one thing is knowing this, another is when a helpful person points you in the right direction. I'm eternally grateful.


So what do you think was the special ingredient of your new novel which caused it to be picked up?

Hard to say. Because I write romantic suspense, my work is a hybrid of the crime and romance genres, but I also throw a few other elements into the mix – social topics, political comment, difficult personal issues. Plus, my characters tend to be quite secretive. I'm hoping that these aspects combined make up that literary umami which may appeal to readers!

Writers are always asked where they find their ideas. Would you like to share any tips with us on how you find your inspiration?

In a word, everywhere. I live in a multi-cultural suburb of London, so there's a lot happening, but more remote areas also capture my imagination. I like to start with a setting, a what-if scenario, plus some sort of issue that needs to be dealt with, and work from there. Then there's magazines, TV programmes, snippets of conversation overheard on the bus, old stories, proverbs... the list is endless. I write it down on slips of paper, put them in a box, then go through it from time to time if I need a fresh idea. There's always something in that box.

How would you describe your book? What did you enjoy most about writing it? And which part created the most problems?

As I mentioned above, my book is part crime, part romance, and what I enjoyed most about writing it was the North Norfolk setting, which almost became a character in its own right. The most difficult thing to write were the emotional scenes because I became deeply affected by the characters' feelings. This surprised me – I thought I could separate myself from my characters, but clearly not.

What advice would you give to an aspiring writer?

Don't give up. Believe in yourself, even when people tell you to get a proper job, and that you're just “throwing good money after bad”. You're pursuing a dream. So what if they' think you're a saddo just because you haven't been published yet? You'd be far more of a saddo if you didn't even try.


Which character from your book would you most like to trade lives with?

None of them! I make it my mission to keep my characters in the crucible for as long as possible, so I really wouldn't want to be in their shoes.

What should every good writer avoid?

Mmm, lots of things, I suppose. Not take ourselves too seriously, perhaps...?

Have you ever won or been short-listed in any competitions or awards, and do you think they help with a writer’s success?

In 2011 I won the Festival of Romance New Talent Award, which was fantastic. About a month later I signed with Choc Lit. The same year I was also Commended for the Yeovil Literary Prize, and in previous years I've been placed in various competitions, including being on the long-list for the CWA's Debut Dagger twice, and receiving the Katie Fforde Bursary. Winning or being short-listed doesn't necessarily lead to publication, but it does give your confidence a massive boost.

My next book, entitled THE ELEPHANT GIRL, which will be published in July 2013. It's the story of a woman who, as a young child, witnessed the murder of her mother. 20 years later she begins to question what she actually saw and whether she might have been an unreliable witness.... Oh, and there's a smashing hero in it! 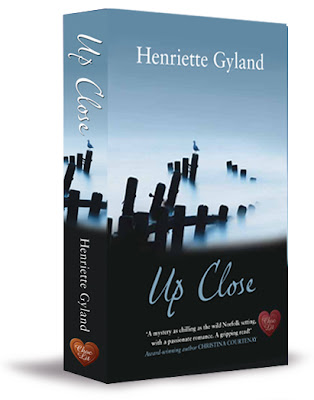 Too close for comfort…

When Dr Lia Thompson’s grandmother dies unexpectedly, Lia is horrified to have to leave her life in America and return to a cold and creaky house in Norfolk. But as events unfold, she can’t feeling that there is more to her grandmother’s death than meets the eye.

Aidan Morrell is surprised to see Lia, his teenage crush, back in town. But Aidan’s accident when serving in the navy has scarred him in more ways than one, and he has other secrets which must stay hidden at all costs, even from Lia.

As Lia comes closer to uncovering the truth, she is forced to question everything she thought she knew. In a world of increasing danger, is Aidan someone she can trust?


Thank you for sparing time to talk to us today Henriette, it’s been fascinating. We wish you every success with your book.
Best wishes, Freda


Posted by Freda Lightfoot at 8:30 AM

Great interview, Henri! Can I ask, when you write your characters, do you have any people in mind? For example, actors or actresses that you envisage in the part? Or are they purely 'characters of the mind'?

Your book sounds my kind of story, Henri. Many years I ago I thought I was going to experience the bright lights of Copenhagen and ended up in Viborg on the Jutland peninsula instead! Wonderful country though and I met my American husband there so no complaints.

I enjoy a book with various angles and complications Henri and this sounds like my kind of read.
Good luck.

Congrats, Henri. And I can't wait to read it, especially as it's set in my part of the world!

Jane - Good question. I start out by "hearing" the characters in my head, which then helps to build up a mental picture of them, but when it comes to physical traits, I sometimes "borrow" from real-life people, e.g. actors/actresses, celebs, or even just someone I saw on the bus. I'm like a magpie, except I steal people, not shiny objects!

Angela - I'm actually from Jutland myself, but from north of the fjord. Viborg is a really nice town, and if I remember my geography right, there's some lovely heathland surrounding it. The perfect place to meet one's intended, I think.

Gwen - Many thanks. Yep, there are plenty of angles and complications in this book!

Kate - I loved writing the Norfolk parts of this book, and hopefully I get a chance to get up there again soon. Although it can be quite bracing at the coast at this time of year (brrr!).

Like that little kernel in there Henriette, that the setting almost becomes one of the characters, how it sets the tone. Something I've always loved are books with settings where by their very nature, the settings hint at foreboding or calm.

I used to live in Suffolk, and was engaged to a man who lived in Norfolk. I love the area and I love romantic suspense so I can't wait to read 'Up Close'.

Vonnie - I agree, and I think someone like Daphne Du Maurier was an expert at this - not that I'm comparing myself to her :-)

Liz - Thanks for your support. I hope you like it.

I enjoyed reading your blog, Henriette. I love hearing how other authors work.

I hope your book is doing well.

Tel you what, Henri, I thought "Mary Stewart" for a modern age. It's a brilliant book.

Thank you, Anna. It's interesting how different we all are. I think there are as many particular ways of working as there are authors!

Lesley - Mary Stewart... wow, that's the best kind of compliment you could pay me! I adore her books.

Lovely interview Henri and I am going to be reading Up Close over the Christmas break on my kindle. Love Carol

Thanks, Carol. I look forward to reading yours when it comes out.
Hx

Sounds terrific, Henri. I love books with lots of dimensions. I'm going to love reading this one! Jenny x

Great interview Henri. I've just finished reading Up Close. As you say, lots of angles and complications. I really enjoyed it.

Lovely interview and your book is definitely on my TBR list, Henri!