An interview by Jenny Haddon

The Wednesday before the Royal Wedding, there was a more select gathering in London, to celebrate the republication of some of the best (and best selling) historical novels of the late 1970s, written by Claire Lorrimer. Amid a lot of sun, champagne and gossip, we toasted success to titles that were part of a publishing phenomenon a generation ago.

Here is Claire talking to her former editor and RNA President, Diane Pearson, at the launch. 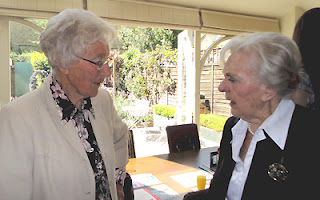 First on the shelves is The Chatelaine, in which a seventeen year old American heiress marries an English aristocrat for love and acquires a rambling house, four complicated brothers-in-law and a French mother-in-law whose obsessions are going to change her life for ever. The first of the Rochford trilogy, The Chatelaine will be followed by The Wilderling (Book 2) in June and The Dynasty (Book 3) in July. The Women of Fire trilogy follows, later in the summer, starting with Scarlett. 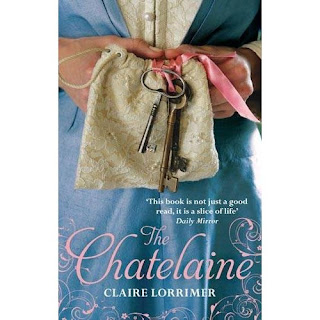 Beautifully re-packaged and lightly tweaked to suit today’s taste, mainly in the matter of names, these books are examples of the famous Hot Historical, which took publishing by storm a generation ago. Publisher Rosie de Courcy described the genre as a vast, breathless romp, sizzling with energy and great fun. (See Fabulous at Fifty, recollections of the Romantic Novelists’ Association 1960-2010)  Claire Lorrimer wrote some of the best.

Claire Lorrimer  has been a writer all her life. Daughter of Denise Robins, the twentieth century Queen of Romance, Claire was a rebel when young— her lively autobiography, You Never Know (2007), is both illuminating and very funny on the tribulations of being the tomboy daughter of a glamorous fantasist. However, when she began to write regularly for Mills & Boon (under her own name of Patricia Robins) she found her mother both interested and supportive. After that, they became firm friends.

Claire’s M&Bs were contemporary but her agent Desmond Elliott was convinced that he could sell big-sweep historical novels into the USA, if she would only write them. But Claire had hated history at school, where a malicious teacher taunted her with her mother’s romantic novels, and it took Elliott three years to persuade her. But with school fees to pay and an assistant who was a history buff, she decided to give it her best shot.

At once, two problems emerged. First, the history anorak became ill—so Claire, ever resourceful, threw herself on the mercy of the local librarian who gave her a reading list for her chosen period. Then there was the structure of a novel designed to span many years. ‘At first I started flying into the mist, as I would have done with one of my contemporary stories,’ she says. ‘But then I re-read the first 100 pages or so and realized that I had had a maidservant pregnant for something over two years. So I went back to the drawing board and did some serious planning.’ Her colour-coded masterplans became legendary – green stickers for things that couldn’t be changed like the Battle of Waterloo, orange for things that were her own invention and she could shift at will.

Desmond Elliott had been right. When it was done, he offered the ms to three US publishers, who all came up with enthusiastic offers. Indeed, when Claire told her numerate son the advance that was eventually agreed, he shook his head. ‘No you must have written that down wrong, Mother. There can’t be that many noughts.’

The Americans, however, wanted more sex. Difficult, she says, when the book was already written. But, ever the professional, she went away and thought about it and came up with a solution—a seductive highwayman inserted judiciously into the plot. Only, then, of course, she fell in love with him and wanted to change the ending, which the publishers wouldn’t allow. (Read the Woman of Fire trilogy, if you want to see how she resolved that so that everyone was happy, including the heroine.) 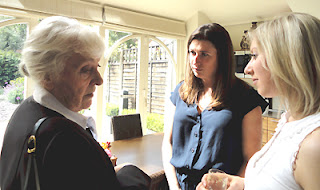 Her first hot historical was an instant hit on both sides of the Atlantic—it was re-printed 13 times in the USA in its first year of publication. More than a dozen similar titles followed until, says Claire sadly, ‘Sexy historicals went out of fashion and the world turned towards nasty violence.’

Now, however, these gorgeous books are available again in new generation formats: not just paperback but ebook, too. And a new generation of readers is in for a treat.


To find out more about Claire visit her website:
http://www.clairelorrimer.co.uk/

Leave a comment for a chance to win a signed copy of Claire's book.
Posted by Freda Lightfoot at 8:54 AM

Wow! These books sound fantastic! Please enter me for a chance to win a signed copy of Claire's book. Hope I win!

Can't wait to read this book as Claire's books passed me by when they first came out - can't think why! How great that they're back out in the marketplace again so I get a second chance.

Haven't ever managed to read any of these books but they sound great and I love the thought of the sexy highwayman!

Lovely interview. I can see I'm going to have to order these books.

I discovered Claire Lorrimer's books by chance last year when I came across Mavreen at the library. Since then, I've been scouring libraries and second hand bookshops trying to find all her books. I am beyond thrilled that her books are now being reprinted with such gorgeous covers.

I loved these first time round. I remember getting them from the library to read when I was on night shifts during my breaks. They were very popular with the ante natal ladies on my ward.

Another author I need to explore, obviously. Sounds a treat.

Thanks Jenny for an interesting interview, I'm sure she came to speak at the RNA conference a few years back (unless I'm much mistaken). I'd love to read one of her books so it's great to have the opportunity to be in the draw.

What a wonderful story - definitely to seek these out!

Thanks for this wonderful interview, I love the sound of these books and can't believe I haven't read any before now.

My daughter and I have read Last years nightingale twice, its our favourite book, we think it should be made into a film! My other daughter is reading it now and cant put it down. Am now on the second of the Rochford trilogy.The first one was great, but still love Nightingale best.

Great to see all the comments on these books, i hope everyone enjoyed them.

If you did, please follow @ClaireLorrimer on twitter to keep up to date with new information, and reccommend them to your friends!