Jane Jackson says she’s been making up stories all her life. Scolded as a child for her ‘over-active imagination’ now she gets paid for doing what she loves. Married to a Cornishman she has three children, soon-to-be six grandchildren, a canoe, an allotment, and a passion for coastal walks. So tell us what made you want to write and how you got your first break, Jane? 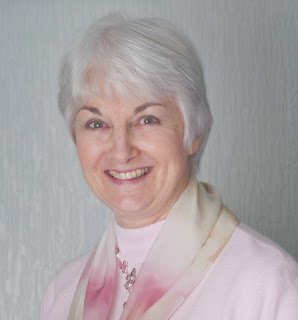 I’ve loved reading books and writing stories since I was very young. At 28, divorced with two small children and an ulcer, I found emotional escape and comfort in reading. One night I had the weirdest dream. I couldn’t forget it and decided to find out if what I had dreamed could actually happen. The result, which took three years to research and write (and I loved every moment of it) was my first book, DEADLY FEAST. It was published by Robert Hale and I knew I had found what I wanted to do for the rest of my life.

Some writers need silence, others prefer the bustle of a coffee shop, TV, or music playing. Or you may need your cat on your lap. What is your favourite mode of working?

I prefer silence and work best in my office/study converted from half of our double garage. There’s no phone line and my desktop computer is purely for word processing. I do internet research and emails on my laptop in the house. When I’m writing I live in the world of the story so I want to be able to hear the characters’ voices and all the other sounds in their world.

Before my self-employed husband retired I did all his paperwork, but I’ve been fortunate enough to earn a living as a writer for over thirty years. I’ve recently become full-time carer for my 96-year-old father and now spend four hours each morning with him. Once he’s washed and dressed and the household chores are done I have an hour or so before it’s time to prepare and cook his lunch. So I’ve started taking my little netbook with me and using that time for writing-related jobs like blog posts. There has been a great deal to sort out, so work on my current book has had to be put aside, though I hope to get back to it soon.

Which authors have most influenced your work? And which do you choose to read for pleasure?

The writers who have influenced me most are Georgette Heyer, Diana Norman (The Vizard Mask - superb) , Mary Stewart, Barbara Erskine, Dick Francis, Elizabeth Chadwick and Terry Pratchett for characterisation and absorbing story-telling; Val McDermid, Michael Connelly, John Connolly and Meg Gardiner for pace and gripping plot twists. Katie Fford, Jojo Moyes and Sue Moorcroft offer wonderful feel-good escapism. When I first began reading Mills & Boon novels prior to writing them, I adored Violet Winspear, Anne Mather, Mary Wibberley, Anne Weale and Sara Craven. Now I include Kate Hardy, Caroline Anderson and Kate Walker among my ‘must-read’s. There isn’t enough space to list the countless others, many of them members of the RNA, whose books I enjoy and whose skills I admire.

What do you enjoy most about being a writer? And which is the hardest part of the job for you?

What I enjoy most is the opportunity to learn about life in the past. For my historical romances I chose the periods between 1798 and 1865. THE CHAIN GARDEN was set in 1902 because I was featuring the work of plant hunters and the birth of photography.

The hardest part of the job? Making sure my research is accurate so readers can be confident that the world of the story is as close as possible to how it really was, while taking care not to allow the background and research to overshadow the most important element of the book – the characters. It’s also a bit of a juggling act to balance the demands of family life so I have enough writing time. I have huge admiration for authors who can write in odd moments while keeping several balls in the air at once. I work best – and feel happiest – with uninterrupted chunks of three or four hours.

How do you set about creating your characters? If you write historicals, how do you keep them in period yet sympathetic to readers?

I usually start with a physical background: the roles of the Packet Ships; a granite quarry; plant hunting in India/Tibet. Then I choose my theme. Once I have those, it’s a short hop to deciding on the people who would be involved and why. I develop their backgrounds including events in their pasts that have made them into the people they are. Gripping characters carry a lot of baggage from the past. So their reactions to events and the decisions they make drive the plot as much as the events themselves. 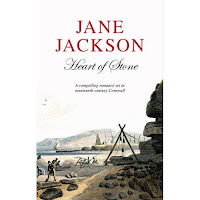 I like writing historical romance because society was far more circumscribed in the past. There were more rules. Women were defined by marriage. They went from being someone’s daughter, to someone’s wife, to someone’s mother. Opportunities outside those roles were few and it took great courage to flout convention. So I ringfence my characters with the rules of the period. But while what is considered acceptable behaviour has changed dramatically in the past 200 years, human needs and yearnings haven’t changed: a roof over one’s head, enough to eat, work to pay for these, someone to love, and after that enough money for extras. Even when marriages were made for property or dynastic reasons, men and women still sought love. Among the lower classes men sought a marriage partner they could rely on to run a decent home and bring up a family. Farmers preferred to take a wife from a farming background because she knew what the life entailed and could be relied on to run the dairy making butter and cheese, and help out with calving or lambing.

How do you relax? What interests do you have other than writing? Do you think it important for a writer to take time off?

My husband and I do a lot of walking. Living in Cornwall we have so many glorious places to walk close to home. We also have a Mad River canoe which we can launch from the Playing Field alongside the village creek which leads out to Mylor marina and The Carrick Roads. My husband fitted it with an electric motor, so we have all the pleasure of being on the water with none of the hard work!

As an avid reader I get through four or five books a week so wet days never worry me. I wouldn’t speak for other writers, but when I’ve been writing hard for several days/weeks, even though I might not want to stop, I know that a break will give me fresh perspective and recharge my creativity. I often find that during these breaks I get ‘light bulb’ moments which solve problems I might be having with a situation or character.

What advice would you give to a new writer?

There are numerous excellent books available that teach the craft of writing and the techniques required for every genre. I’d advise would-be writers to read several of these and also to study how writers they admire achieve their effects. Taking time to analyse how published writers create realistic and memorable characters, how the character’s choices influence plot development, etc will help enormously when working on your own story.

Write because you must; because you cannot imagine life without writing. Write the best book of which you are capable. Never accept second best from yourself. Near enough is never good enough. When your first book is finished, use everything you have learned while writing it to make the second even better. Write with passion. If you aren’t totally absorbed by your story and characters, how can you expect a reader to be? When I started writing there were very few How To books. I learned by doing it, while reading widely and voraciously – as I still do.

I’m really fortunate to have three very close writing friends. We have been writing buddies and critique partners for 20 years. Because of the level of trust we have built up we can be totally honest with each other – and we are. Weaknesses are instantly pointed out, over-writing is mercilessly edited. The only rule is that all criticism must be constructive. Saying something doesn’t work is fine provided an alternative is offered. When all three pick up the same fault it’s obvious the plot/character/scene needs work. What is hugely helpful is when all three offer different suggestions. Sometimes one of these is the ideal answer. Or none might appeal. Instead we’ll come up with an entirely new solution that works perfectly for the story, one which we would never have thought of had it not been for the crit.

I post on the http://historicalromanceuk.blogspot.com/ each month. I also have a blog on my website on which I try to post as often as I can. Apart from those, for me, producing a book a year and keeping my website updated seems the most productive use of my time. Others enjoy social networking. It’s a matter of personal choice.

With the increasing popularity of ebooks, how do you think digitisation might change your own career as a writer?

I hope that it will bring my earlier books to a new readership.

Do you edit and revise as you write, or after you have completed the first draft? What method works best for you?

I edit and revise as I write, and always end the day’s work in the middle of a scene or chapter. The following day I re-read and re-edit the previous day’s work. This gets me ‘tuned in’ to the story and fires up my imagination. Revising and editing as I write means a lot less editing once it’s finished. Again this is personal choice and what works best for me.

Tell us about your latest book, and what inspired you to write it. 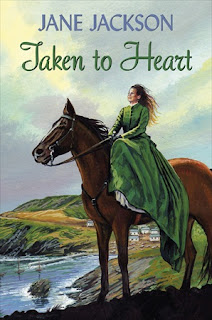 My latest book, TAKEN TO HEART, published on 31st October, picks up the story of a character who first appeared in DEVIL’S PRIZE. At the end of that book, Jenefer Trevanion had broken off her engagement after discovering that her fiancé had been living a double life. Then her father died in a fire that destroyed her home and with it everything that defined her place in local society. Though I wrote two further books after DEVIL’S PRIZE, one of which – HEART OF STONE - was shortlisted for the RNA’s Historical Prize earlier this year, Jenefer kept coming back to me. I couldn’t stop wondering what happened to her and how – if – she managed to rebuild her life. So I had to write the book to find out.

To learn more about Jane’s books, visit her website at http://www.janejackson.net. I have a blog page within the website and would love to hear from you with any comments. TAKEN TO HEART by Jane Jackson. Pub. Robert Hale Oct. 2011.