I’ve been a member of the RNA for many years, from the time my husband bought  me Mary Wibberley’s To Writers With Love, in which she recommended joining the Association to any aspiring writer. I joined, submitted to what is now the NWS, got second reads and an interview at M&B’s Richmond headquarters - fairly new, then! - and then gave up. It was several years afterwards I met Marina Oliver when I was speaking at the International Comedy Writers conference, and she persuaded me to rejoin, telling me that they’d just started a new cyber chapter!
And look where we are now. I’m sure the RNA was one of the very first writers’ organisations which embraced “modern technology”, so we adapted to its proliferation throughout our industry better than most. In the US, of course, it spread far wider and quicker, and I remember when I was one of the few online in the dark ages seeing the E-Publishers start up. I, along with several other people, didn’t take them seriously at the time, and, I’m ashamed to say, almost regarded those published by them as little better than vanity published. Indeed, epublished authors weren’t allowed full RNA membership.
But now, not only are digital-first books appearing in the New York Times best-seller lists, but so are self epublished books. And it is these same digital first publishing companies that have given so many opportunities to the writers of romantic and erotic fiction, the genre to profit most from the revolution.
For revolution it is. The old publishing model is under threat and some of the power is being wrested from traditional agents and publishers. However, I don’t think, as so many worry-mongers have pronounced, that epublishing and the ebook sound the death-knell of the printed book. I think, as with nearly all forms of creative media, they will happily co-exist. There will be some jostling for position, but as long as we stay calm, and keep up with all the new developments just as we have done in the past, I don’t think we have too much to worry about. But I would hope that we are all sensible enough to make sure our work is good enough to go out there. Good agents and editors currently do that for us, so let’s not throw those estimable babies out with the bath water.  We may need to adjust our positions, but we still need eagle eyes on our manuscripts, if not the “gatekeepers” of tradition. It’s also good to remember that some of those indie authors who sell in such huge numbers have now signed traditional publishing deals.
In my case, many of my readers would never buy an ebook – I know their demographic! So traditional publishing is essential for me. I, of course, don’t write romance, but I’ve remained a member here because I’ve met so many wonderful people who have become true friends. And just as a little postscript, I had an email via my website this weekend, complaining that I’d spoilt the Whole Point of the books by giving away the fact that one character had married another, when this reader was avidly working through the series following their romance. Ashamed - I changed the website.
Lesley's latest book MURDER AT THE MANOR is out now.... 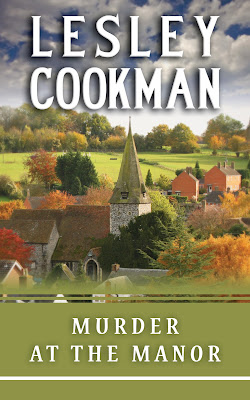 The ninth title in the Libby Sarjeant series....
Libby Sarjeant and her partner Ben are hosting a Writers' Weekend at Ben's family home, The Manor. Surely, nothing can go wrong? But when a strange body turns up in the grounds, it appears that more than one of the delegates could have murderous intentions - and not only on paper!
Posted by Unknown at 7:28 AM

And I should say - The RNA gets an ackowledgement and a starring role in Murder At The Manor!

Hadn't thought about that problem if writing a series, Lesley. I used to get incandescent when my publisher gave away major plot points in the blurb 'because the reader wants to be reassured'.

I'm sure you're right - e book and print will carry on side by side for a while. Horses for courses. wonder if the under 35s will give up physical books completely.

I do hope you're right, Lesley - I can't exist without "proper" books! I have nothing against e-books and own a Kindle, but I do want real books to put on my shelves as well :)

I hope I'm right, too, and both my daughters, one well under 35, still prefer real books, although Philly reads on her ipad simply because it's more convenient while being a nomadic person!

I agree, it's a sign of the times, and I seriously don't think traditionally published books are going to disappeare, it's just that things are going to be markedly different. I, for one, wholly embrace the idea (although I haven't got around to buying a Kindle yet...) - I find it exciting, and it gives writers more control, too.