Merry Christmas from the RNA - Liz Harris Shares A Stocking for Christmas.. 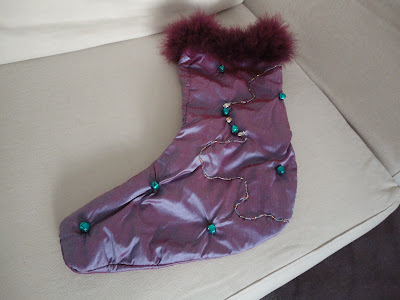 I still give my sons - now 31 and 32 - a Christmas stocking.
Last year, my younger son’s partner, Angie, came to stay for Christmas.  Naturally, Angie, too, had to have a stocking, and I had great fun filling a stocking for a girl – a first for me.
For obvious reasons, ‘Father Christmas’ decided not to creep into the bedrooms to put their stockings at the end of the beds, but to leave them beneath the Christmas tree.
After breakfast, we all went into the sitting room, and lo, we found the stockings.  But there were four stockings, not three.  The fourth stocking was for me.
And this was a very special stocking.  Not just because it was my first from my sons.  Not just because everything in it showed a great deal of thought.  It was very special because the stocking itself had been made by my non practical older son!
Luke had bought the satin, fur and beads and, guided by his creative partner, Sophie, had cut out and sewn the stocking together. Then he had sewn on every bead individually.  He had not allowed Sophie to do so much as one stitch.
Happily, the first three stockings contained Kleenex, and this was put to good use as I saw the thought and care that had gone into making my stocking.
The stocking adorned the sitting room for the whole of the Christmas period.  I've attached a photo of it - I think it looks pretty good.
Follow Liz on Twitter here.

Please come back on Boxing Day to see how the RNA is decorated on the first day of Christmas....

Oh what a gorgeous Christmas story!

Many thanks for your comment, D.J. I was over the moon when I saw the stocking, even before I'd looked at its contents.

A very Hapopy Christmas to you and your family, and a Happy New Year! I hope that it's a good one.

Ah! Bless him! What a lovely story.

That's a lovely story! I suggested we stop stockings this year-my children are late teens and twenties, but was soon told this couldn't be. I'm so glad I've carried on with this tradition now-I just hadn't reaised what a special part of Christmas it is for us all.