It was the first conference for most of The Romaniacs and with seven out of nine of us attending, we already knew we were going to have one heck of a kitchen party. We had our own karaoke backing track system, lead vocals by Laura  James, plenty of wine, several bottles of champagne and Catherine Miller brought some very special Morello Cherry homemade wine, circa 1975, courtesy of her late Grandad. Celia Anderson made some delicious cakes.  Oh, and in true student style, Lucie Wheeler provided the Super Noodles. 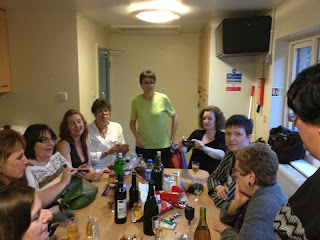 It could only have been better if our lovely Jan Brigden and Liz Crump had been there.

To sum up our kitchen party, we thought we’d share a page from our Visitors’ Book …

Dear Kitchen, Thank you for helping me rediscover the joy singing can bring. And also the pain. Love, Laura.

Nikki Goodman : Ah, how will I ever forget the Romaniacs’ kitchen? There was wine (some of it homemade vintage circa ’75 that threatened toxic shock syndrome), there were snacks and there was singing! Best of all was the laughter.  A kitchen beyond all compare.

They say the kitchen is always the hub of the party, and in this case, it most certainly was! (Lucie)

THIS is what Romantic Novelists look like! (Debbie White) 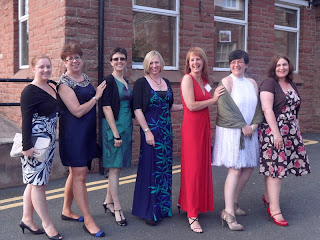 Jane Holland : Those three glasses of 1975 Morello Cherry homemade wine will stay with me for life.

The Romaniacs needed a good get together and what better way than to do it with friends. That and alcohol which could change the way you see the world. That’s why at the time we were all singing like angels. (Catherine)

We may have had a naughty kitchen, but it wasn’t dirty, having been sterilised with alcohol. (Laura)

Ever since joining the RNA, I’ve aspired to the heady heights of having one of the Naughty Kitchens at a conference.  And now, thanks to some wonderful company, a lot of alcohol and loud singing, I think I can say I’ve done it – and got the YouTube evidence to prove it. (Vanessa)

Mandy James : My accommodation was next to the Romaniacs’. How did I know? The raucous caterwauling and shrieks of laughter gave it away.

I left my quieter party and went to investigate … they wouldn’t let me leave, even though I insisted I didn’t want a drink or to sing at the top of my lungs. But eventually I had a small sherry … When in Rome-aniacs … see what I did there?

Two hours later the police came to close us down. Well, OK, a slight exaggeration, there was only one arrest. We had an amazing time and I recommend that the naughty kitchen be free on the NHS!

When I found out we were in student accommodation, I decided that I needed use this opportunity as research (I got that tip from Jane Wenham-Jones) and what better way than to fully immerse myself into student life. What a kitchen party that was. Sadly, any further attempt at emulating a student ended on Sunday - even now I am still trying to recover from the weekend. (Sue)

The kitchen party was to the Romaniacs and their guests what opium was to great authors of the past – inspirational, but painful the next day. (Celia)

A messy kitchen is the sign of a happy kitchen, and ours was delirious. (Debbie) 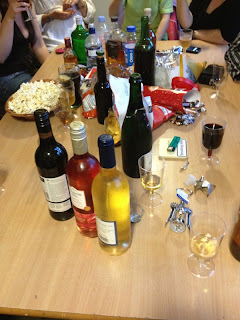 It was always going to be the Romaniacs’ kitchen. (Laura)

Ah - glad to see my Grandad's wine left a lasting impression on everyone.