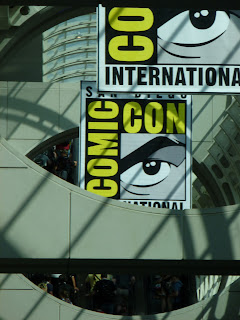 It was with a squeal of excitement that I received my confirmation email: I was going to San Diego Comic Con - the biggest tribute to fandom in the world. But even I did not appreciate the full impact of 130,000 fans all gathered in one place. This is Fandom with a big capital F. And it runs like clockwork – right down to which entrance you are allowed to use, depending on your ticket.

San Diego Comic Con. Four words that would make the face of any fan of popular culture light up. What started off as a small gathering of about 100 comic book enthusiasts in the 1970’s has become four days and five nights of non-stop geekdom.

For many people who go to San Diego for Comic Con it is a pilgrimage. It is an expression of self which one finds nowhere else and the attention to detail when it comes to costumes is astonishing. Zombies, Iron men, Zeldas, Hobbits complete with mechanical ponies. You name a character and I can guarantee you that someone will have come dressed up in just such a costume. Even the Brits were represented and I lost count of all the Daleks and girls in Tardis dresses I saw.

For others it is about meeting their heroes and fans will literally queue for days, in full costume, in the blazing hot sun for a glimpse of their favourite television star or author. It is one huge big swirling mass of everything and the only place of refuge – the professional lounge, hidden behind an unmarked door in one of the corridors. The only sign that it existed, a burly guard checking pass tags. Inside, they served cool lemonade and when I looked up, I saw a number of huge name authors sipping coffee and typing at their laptops. It was all rather surreal.

I was even luckier to have been given a place on a panel. My publicists had pitched me and they had managed to win a spot. We were discussing Urban Fantasy with big names like Jim Butcher and Kevin Hearne. More than nine hundred people showed up at the venue and some had to be turned away.  Sitting at the table in front of the famous icon backdrop I was terrified and sweating. Blinded by the lights and trembling at the sheer adrenaline rush of being in front of so many people, I remember thinking, ‘Never mind, these people are here to see the famous authors. You are just here to fill a seat.’

Then one of my fellow panellists poked me in the ribs and whispered ‘look’. I squinted and when looked closely at the crowd. Then I saw them: A girl with red hair, in a leather corset and a pair of jodhpurs; A man in a top hat and a frock coat. They were dressed up as characters of my books. My heart started racing. In fact, they were dressed exactly like the covers of my books. They were only a few, but they had come here to see me. My fans had come all the way to San Diego to see me.

In the midst of the chaotic celebrity soup, that moment of recognition was the one that will remain with me forever and I was humbled. It made me realise why we, as authors do what we do. We are here to tell stories to people. 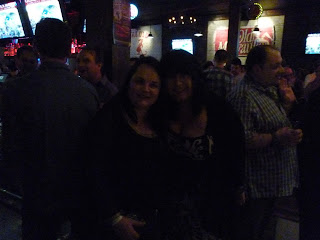 Also, I got to say hello to E L James. She’s a really lovely lady and she made the effort to be nice to me, a nobody; and so I shall always be a fan. Here is a slightly dark and under-exposed picture of us.

Liesel is the award-winning author of steampunk novel A Conspiracy of Alchemists (book one in the Chronicles of Light and Shadow series), which won the RNA’s Joan Hessayon award in May this year.  The second novel in this series, A Clockwork Heart, is out now.
Liesel is a life-long fan of Gothic literature, a hopeless romantic who loves Victorians, Steampunk, fairies and fantasy monsters. For more information about Liesel please check out her website at  www.lieselschwarz.com

Posted by Christina Courtenay at 11:06 PM

It sounds mad, Liesel - but fun! Did you manage to sleep at all?

Liesel that sounds amazing and I will admit that tears appeared in my eyes when saw your fans...how cool!

Thanks you guys. I slept for about two days after. It's definitely something you should do before you die.