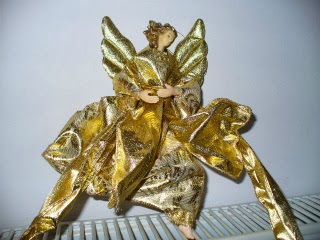 One Christmas, when my children were still living at home which was some time ago now, I couldn't find the fairy to put on the top of the tree. Instead I fixed a card to it which read: Situation vacant: Christmas tree fairy. Duties: to guard the tree and the presents under it and to grant wishes wherever possible. Hours of work; 24 hours a day for fourteen days a year. Remuneration: Smiles.
It did produce smiles and was a talking point for everyone who came to our home that Christmas. The following year I received, through the post from my sister, a rather smart fairy, dressed all in gold, with a note to the effect that she would like to apply for the vacant post. She topped our tree every subsequent year until the children left home and we no longer had a big tree. But I still bring her out at Christmas and sit her on the bookcase to remind me of Christmas past. 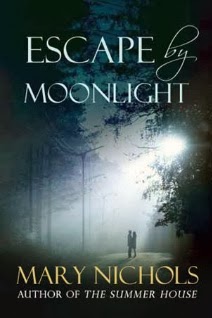 Summer, 1939. The de Lacey family of Nayton Manor believe they are ready for the changes the war will bring. Elizabeth, the eldest daughter, is due to return home from her grandparents' farm in France and is expected to marry the dashing Captain Max Coburn. But when Grandpere suffers a stroke while driving Elizabeth to the station, her future is changed. Instead of returning home to Norfolk, Elizabeth chooses to stay and help her grandparents. Max is also stationed in France - but will this help their courtship, or will the war threaten to separate them for ever? Meanwhile, in the village of Nayton, Lucy Storey dutifully cares for her father the stationmaster, running their home in the little cottage by the railway. Her long hard days are brightened by meetings with the handsome Jack de Lacey, who brings a brief escape from her daily routine. As their friendship grows, can they overcome the class prejudices set in their way, or will the jealous signalman Frank Lambert succeed in destroying their romance? For all at Nayton, war becomes a time of risk and danger, of secrets and betrayal, and of finding love in the most unexpected places.

marynichols.co.uk
Posted by Unknown at 2:56 PM

Merry Christmas, Mary Nicols! I hope you have an awesome day today.