Today we are talking to Anna Jacobs who is addicted to storytelling, has over sixty novels in print and more under contract. Stories are nagging to be told, but sadly she has to waste time sleeping. Anna’s extremely happily married to her own hero, with two daughters and a grandson.

Anna avoids winter by splitting her year between homes in the UK and Australia. She writes for three traditional publishers, historical novels for two and modern novels for the third. 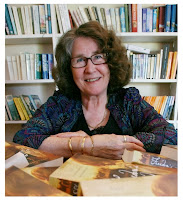 Was it easy to start publishing some of your back catalogue on Amazon’s Create Space and would you recommend authors try this rather than go to a company that provides the service?

It’s my husband who does the publishing of my backlist on Create Space (and Kindle). The first book took him over a day, the second only a couple of hours. He used the templates supplied by CS. We’ve used stock photos bought on line for the covers, and some family photos. I think most of us have friends who can help with the baffling bits of publishing on CS so to avoid payment go to a company for help only as a final resort. CS is free.
With moving house and hitting the festive season how did you fit writing around so many distractions?
I’m used to fitting my writing into busy times but I managed to dabble with the first chapter of a new story. I didn’t produce much but I got started, that was the main thing. There are still boxes to unpack but they can wait, my heroine can’t . . . She’s in trouble . . .
Can you tell us something about your latest books?
I’ve just finished writing ‘Mistress of Greyladies’, the second in the series set from 1900 to just after the Great War. Our heroine is a nursing aide and general dogsbody and Greyladies has been converted into a convalescent home. But the old country mansion and its resident ghost are still helping the Latimer ladies.
I’ve just started is the third in the ‘Hope’ series of modern novels, romantic suspense set mainly in the Pennines and linked to the antiques world. My heroine is going through a divorce. The hero was a minor character in the first two books.  Once I’ve got the story and characters set up, I can’t plan ahead. I just walk through the adventure with my characters. I do know the ending will be happy, though. Before the end of June I have to finish the first in a new series for Hodder & Stoughton and have already started the research.
For members of the New Writers’ Scheme at the beginning of their writing careers, can you tell us how you started out as an author?
I started in the days before the Internet, so things moved more slowly. I spent about ten years writing one book after another, working full-time, studying for a Master of Business and raising teenagers, so it was hard to fit in as much writing as I’d have liked. When I had long service leave I took several weeks off to write full-time.
I entered a national novel writing competition in Australia and came second of 800 entries, with a $10,000 prize and publication. The latter was far more important to me than the money. Then the publisher abandoned the competition. I came down with ME but found I could still write between resting. I think the writing helped me recover. The following year I had six novels accepted for publication, three already written and also contracts for sequels. My first novel was never good enough to see daylight but years of writing and polishing taught me to write and paid off big time.
To sum up, never give up. Learn the trade and don’t expect your first novel to be publishable till it’s been polished later, after you’ve learned your trade by more writing.
I have two books coming out in January:

‘The Trader’s Gift’ published by Hodder & Stoughton
‘Winds of Change’ a novel set in Australia and England, published by Severn House.

Thank you for joining us today, Anna.
Compiled by Natalie and brought to you by the blogging team of Elaine Everest, Natalie Kleinman and Liv Thomas
Please contact us at elaineeverest@aol.com if you wish to be featured on our blog.