Welcome to Frances Susanne Brown who is going to show us how to think about writing history.
History is made fresh daily. Every minute, every hour, every day that passes, events tumble into the endless well of ideas available to any writer of any genre. Today I would like to share with you three ways history can be used to inspire and shape a novel: as a backdrop, a springboard, and as a puzzle.
History as Backdrop
My favorite period of history is the Middle Ages. This fascination sparked the beginning of a writing career when my historical articles began to appear in magazines such as Renaissance, Herb Quarterly, the History Magazine, and Family Chronicle. But the concept of utilising a specific time period or historical event extends far beyond magazine articles.History as backdrop forms the framework of your story by providing the setting and the backbone. John Steinbeck wrote Grapes of Wrath about the American Great Depression in the Dust Bowl, but the work reached far beyond a documentary. Steinbeck created a family, the Joads, and overlaid their individual, fictional story against the backdrop of the world they lived in. Documented facts about how life affected real people during those times provided Steinbeck with a realistic source for how his characters reacted to their own situations.
History as Springboard
Authors often use one small element from history as inspiration to create an entire fictional world. Tracy Chevalier did this in Girl with a Pearl Earring. Chevalier claims her book was born while staring at her poster of this Vermeer painting. “I wondered,” she said, “what did Johannes Vermeer do to make the girl look at him that way?” From this one what if? Chevalier created Grete, the girl in the painting, an entire cast of characters, a situation, and an intriguing plot. Although she researched Vermeer’s life extensively, she didn’t find much documented about the elusive Dutch artist. Chevalier used the painting as a springboard for her entire story. 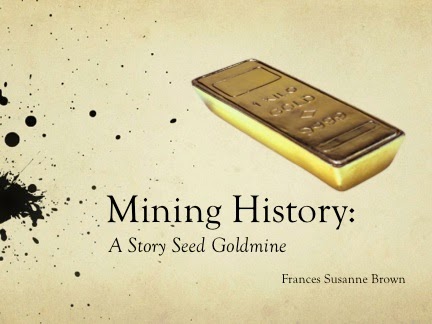 History as a Puzzle
What if history is incomplete? Dan Brown took bits and pieces of what is referred to as “alternative religious history” to create his best-selling novel The Da Vinci Code. Instead of using only one element for inspiration, Brown chose fragments from multiple historical periods and theories, combining them in a unique way to create his highly controversial novel. Controversy, however, isn’t always a bad thing. Press is press, and The Da Vinci Code went on to become a blockbuster in both print and on the screen.

What period of history fascinates you? Do a little research and become an armchair scholar, if you haven’t already. Then ask the question, what if? What if the duke or baroness had a secret lover nobody else knew about? What if star-crossed lovers boarded a ship destined to sink? How would that have played out against the backdrop of the times? Or perhaps you own a reproduction of a favourite painting you see every day. Take twenty minutes to sit in front of that image and free-write, creating a story about the people, place, or event it depicts – use it as a springboard.
You may be one who wonders about the mysteries in our human past. The unsolved crimes, the unexplained phenomena. Pick a few known facts out of what little information exists. Become a weaver of words, intertwining and recombining bits of history into a brand-new, completely original and compelling puzzle that is sure to attract the interest of any reader seeking an exciting new journey.
But then, doesn’t that describe every reader?
Frances Susanne Brown writes historical features for magazines, and her memoir, Maternal Threads, is due out in 2014 from High Hill Press. She is an avid fan of romance where history plays a role. She writes romance under the pseudonym Claire Gem. Her contemporary with paranormal elements stars a book-hurling ghost from the past haunting the hero and heroine. Read more at www.clairegem.com,
www.francessusannebrown.com,
www.maternalthreads.com.

Wonderful essay Frances. History as a puzzle. That is an interesting concept. I'm a sucker for time travel and parallel universe books!