We welcome Alison May to the blog. Alison tells us why A Midsummer Night’s Dream really really has to happen at Midsummer 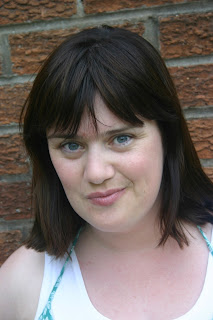 A Midsummer Night’s Dream is a play about a night where anything is possible, where fairies and humans come together, and fall in love, and sleep and dream, and occasionally turn one another into donkeys. It’s a play all about a sort of fleeting magic that’s so real when it’s happening, but in the morning leaves you dazed and confused about how you got from where you were last night to where you are right now.

My first instinct when trying to write an adaptation of the play was to shift the action entirely from midsummer to Hallowe’en. Hallowe’en has that quality of being a night when worlds collide and the rules that stop magic from happening don’t necessarily apply, but when I tried to write the story in that setting, something didn’t quite work, because in a medium sized provincial city in Britain in 2015 – which is where my novel, Midsummer Dreams, is set – Hallowe’en isn’t about magic and mystery; it’s about trick or treating, and barmaids wearing pound shop witches hats, and gingerbread pumpkins with orange icing. And none of those things shriek romance and magical possibility.

And so I went back to Midsummer, which is a different sort of beast altogether. The longest day of the year, with the shortest night, and right across Europe there are traditions around that shortest night. Mostly they involve fire. Because, really all the best ancient traditions involve setting fire to stuff. Want to make on offering to the Gods? Set fire to it. Want to greet the rising sun? Start a fire. Want to keep away the fearsome spirits of the night? Light a fire.

And, as with so many ancient traditions, as Christianity spread across Europe, the new religion adopted some of the rituals and feastdays of the old, so John the Baptist now has his saint’s day at Midsummer, and back in the middle ages the celebrations for the solstice were able to continue under the new name of St John’s Eve. In Gloucestershire, for example, there was a tradition of setting fires which would scare away the dragons which were, undoubtedly loitering somewhere just out of sight, and that continued after Christianity had taken hold, only now they were St John’s nice Christian fires which, presumably, would specifically ward off nasty heathen dragons.

In many European countries, particularly in Scandinavia, Midsummer continues to be a big deal, but in Britain, outside of pagan circles, those universally understood rituals have largely ebbed away. From a writer’s point of view that’s fantastic. It means that Midsummer is left with a vague sense of magic and ritual and something long forgotten about it, but beyond that the creative imagination can run wild. There might be fairies. There might be potions. There might be magic. There might be love. There might even be a donkey, but, then again, there might not. Midsummer is a gift to a writer because it remains a time when, for one short night and one long day, anything seems possible.

Four people. Four messy lives. One night that changes everything … 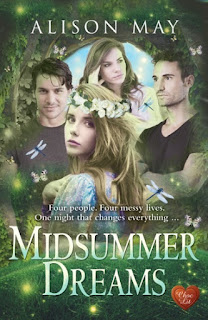 Emily is obsessed with ending her father’s new relationship – but is blind to the fact that her own is far from perfect.
Dominic has spent so long making other people happy that he’s hardly noticed he’s not happy himself.
Helen has loved the same man, unrequitedly, for ten years. Now she may have to face up to the fact that he will never be hers.
Alex has always played the field. But when he finally meets a girl he wants to commit to, she is just out of his reach.
At a midsummer wedding party, the bonds that tie the four friends together begin to unravel and show them that, sometimes, the sensible choice is not always the right one.

Midsummer Dreams is out now on Kindle.

Alison May is a novelist and short story writer who lives in Worcester. Her contemporary romantic comedies, including Sweet Nothing and Midsummer Dreams and the Christmas Kisses series are published by Choc Lit.
Alison is a qualified teacher with a degree in Creative Writing. She has taught creative writing for HOW College and the University of Worcester, and now runs her independent novel writing workshops.
You can find out more about Alison at www.alison-may.co.uk or on Twitter @MsAlisonMay

Thank you for weaving your magic, Alison.

Ooh, what a lovely post. You never fail to engage and make me smile, Alison. :) Best of luck with Midsummer Dreams! Did I mention I adore that cover? xx

I always try to have fires at Midsummer and Midwinter; I love a bit of sympathetic magic, me. But you're right, Hallowe'en has lost the whole 'magic' (although I can always manage a spell if there's gingerbread pumpkins with icing on!). Fabulous post, Alison, and such a fabulous book.

Love the sound of this, Alison - nothing beats a bit of romance and magic at midsummer!