We are joined today by Ali Chrisp, Winner of the Write Time Novel Competition 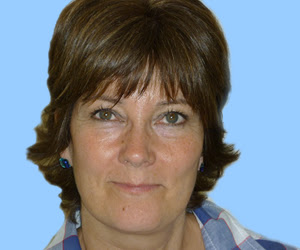 First of all, I want to say how excited I am to be visiting the RNA blog and talking about how my debut novel, a romantic comedy called Home Comforts, reached the point of publication. Starting this blog, I think I may have the equivalent of stage fright, but at least no-one can see the shaky hands!

Like many authors my passion for writing started at primary school and I still have copies of ‘The Rat’ and ‘The Stray Kitten’ which I wrote at that time. After spending twenty-three years in the Civil Service, mainly as an HR manager, I decided that I needed a career change, and for the last five years I have been working part-time as a personal assistant to a lovely lady who suffers from Alzheimer’s disease. As well as being extremely rewarding, it has given me the chance to write my novel and also to have some letters and articles published in women’s magazines.

After submitting Home Comforts to various agents, I was starting to feel a bit despondent (and fed up with well-meaning people constantly asking me what was happening with my book!). Some rejection letters were more encouraging than others but no-one offered to represent me. In June 2014 I spotted the Write Time novel competition run by Corazon Books in association with Mature Times. It was launched for previously unpublished writers over fifty and I was very keen to send off my first three chapters and synopsis. After receiving an email telling me that I’d been shortlisted, I polished the rest of the manuscript and submitted it for the September deadline.

In early November I was thrilled to receive a phone call from Ian Skillicorn of Corazon Books telling me I was the winner, and I couldn’t wait to start working with him. We have liaised closely throughout the editing stage and he has given me great advice about which sections needed to be re-written, and where there were continuity issues.  Ian is also supporting me through the sales and marketing process.

I must admit to feeling alarmed when he started talking about ‘Twitter’ and ‘guest blogs’; I’ve always been a fairly private person and social media was unfamiliar territory. Even worse, my teenage son and husband, who normally bail me out of any technological nightmares, didn’t know very much about social networking either. I’ve persevered, however, and with Ian’s help I now have my own website and Twitter following. I’m very grateful for his patient and good humoured support – he must be a saint!

Of course, getting my book published means that I have been able to join the RNA which has opened up a whole new world of support. There isn’t an RNA chapter in Gloucestershire but I have joined ROMNA and have been soaking up the advice and discussions on there. 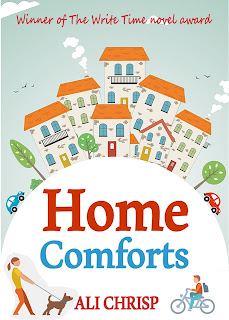 Home Comforts was published on Amazon Kindle on 25 May 2015 and I celebrated with champagne and a meal at my favourite restaurant. For all those aspiring authors out there, don’t forget to look out for novel writing competitions.  It certainly worked for me!

About Ali Chrisp
Ali Chrisp’s career has included teaching aerobics, working in an estate agent, then spending twenty-three years using her writing skills in the civil service. For the last five years she has been a personal assistant to a lady with Alzheimer’s. Ali lives in the Cotswolds with her husband and teenage son. She loves animals and owns Lola the bonkers Labradoodle and Winnie the tabby cat.

Ali was the winner of the Write Time novel award run by Corazon Books in association with the Mature Times newspaper, for a previously unpublished author over fifty. Home Comforts is her first novel.

Congratulations, Ali. It’s been lovely reading about your success

Great blog, Ali. Loved that you won the prize and the support your publisher gave you is nothing short of amazing! Really well done and very best wishes for your ongoing writing career. :-) Julie Vince (write as Julia Wild)

Great to hear the background to Home Comforts, and may you go from strength to strength, Ali!
Gabrielle x

Many thanks for your kind wishes and support. I've learnt a lot during this process and will make sure I put it to good use in my future writing projects. Ali x

Congratulations on your great success,and it gives hope to all budding writers. I know the feeling about launching into social media!! Onwards and upwards.

If you need help with your home’s heating, cooling or hot water, we’re here for you 24/7.
Heating and Cooling Hamilton