It’s a joy to welcome Cathy Mansell back to the blog to tell us about her recent book launch:

Since my last visit in January 2015, good things have been happening. Galway Girl and Where the Shamrocks Grow have come out in paperback with Tirgearr Publishing and Magna large print. All four books out in audio by the end of 2015. Tirgearr has contracted my fifth book, Dublin's Fair City, and Magna have said they want that too. I couldn't be happier.

My recent book launch in Dublin to promote the Cathy Mansell Brand and my most recently published book, Where the Shamrock's Grow, was a great success but not without a few eye-openers along the way. The event took place in the lecture room of Blanchardstown Library.

Hard work went into arranging the venue. It took weeks to have the details confirmed. This particular library, I can't speak for other Irish libraries, don't do commercial. However, everyone I spoke to at the library was courteous and helpful. Yet it took many emails/phone calls before it was finally agreed by the powers that be that I could do a talk and sell my books at the same time.

Deciding to launch in another country is expensive, not to mention time-consuming where advertising the event is concerned. I approached websites, sent out flyers to libraries, newspapers and to people who were kind enough to advertise the event for me. Because the event took place in Ireland, I didn't have the opportunity of speaking with the organizers face to face, so, had to rely on things being ok when I got there.

Each book launch I've done has been a learning curve. For example; last year my Dublin book launch took place at my nephew’s. Over forty people turned up. It was a typical Irish get-together with family and friends, where I met my publisher for the first time. It was a great experience, and I sold lots of books.

It never occurred to me that Irish library policies would be different to those of the UK. For instance; you can do a talk but are not allowed to sell books. No drinks or nibbles allowed. It would have been nice to have offered refreshments, as one lady travelled fifty miles from Cork.

I also discovered that, no matter how well prepared you are, you always need a plan 'B'.  My original plan to cover a two hour event gave sufficient time to each speaker with enough time at the end to sell books. As it happened, my publisher, Tirgearr, was unable to attend. I had advance warning that this might happen and totally understood the situation. I still had my guest speaker as a backup. However, I was totally thrown when he didn't show. Due to heavy Saturday traffic, people arrived late, and the event started half an hour later than planned. Still my guest hadn't arrived. I found myself in the position of having to improvise by lengthening my talk. I spoke about the inspiration behind each book. With the extra time, it enabled me to read a teaser from my newly contracted book Dublin's Fair City. 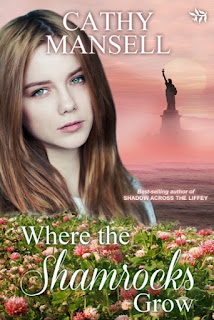 My husband had prepared a fun quiz on an excerpt I read from Where the Shamrock's Grow. It went down a treat. People were laughing and appeared to be having fun. The winner received a copy of the book. My granddaughter handed out a ticket to each person as they arrived for a free draw later.

The warmth and friendliness of the twenty-five people who turned up to support me was wonderful. I sold twenty-three books. It was certainly worth doing and in spite of the set-backs I thoroughly enjoyed every minute of it.

Thank you for having me on the RNA Blog today.

About Cathy:
Cathy Mansell is an experienced writer of romantic fiction. Her early work was stories and articles published in national magazines. She edited an anthology of works funded by Arts Council England and appeared on the TV show Food Glorious Food 2012. Nowadays, she writes novels set in 19s Ireland, depicting the lifestyle and hardships of families in those days. Some of her characters become wound up in intricate criminal plots. She lives in rural Leicestershire with her husband, where she writes daily in her ‘Loft Study’

Sounds like you had a wonderful experience, Cathy. Thank you for sharing.

Good Morning Natalie and Elaine.
Thank you for inviting me on the RNA blog today.

A most interesting post Cathy. Great to hear of your experiences in Ireland and well done for shouldering all the organising, travelling etc. that comes with an event like this. The Cathy Mansell brand is obviously flourishing and I couldn't be more pleased. Lovely book covers, and fascinating stories.

Cathy delighted to read you here on the site. Well done on your launch, it was a lovely afternoon and I thoroughly enjoyed it. Oh how I wish that where I live was only 50 miles it is actually 150, :) Chat soon and continued success with your wonderful writing.

Thank you Margaret.Appreciate your comment very much.
I hope your writing is flourishing in East Bourne and I look forward to reading your newest title "The silk Purse"

Thank you Mary. It was really lovely to meet you face to face and I too enjoyed the afternoon.

I don't know why I said 50 miles as I've done that journey from Dublin myself a few times. I remember paying 50 Euro return on the train. I'm sure it's more now.

I appreciated you coming to my event.

We're sorry to have missed your grand day. You well-understand the situation. We always love meeting up with you when you're in Ireland.

Galway Girl is out in audio Thursday, the 15th. Can't wait to get my copy!

A lovely piece, Cathy. Always a pleasure to have you visit the blog xx

Thank you Kemberlee for stopping by to make a comment.
Much appreciated.

Thanks Elaine - i love being here.

Nice piece and best of luck with the book. I'm a Galway girl myself.

Gabrielle lovely to meet you and thanks for looking in and leaving a comment.
I love Galway. One of my deceased relatives lived in Galway then moved to Dublin.

When I visited Salthill for the first time in 2013 I loved everything about the place. It inspired Galway Girl.
Just wish I'd had more time to explore the islands.

I really enjoyed your post, Cathy. As a newbie to the Tirgearr family, it is interesting and helpful to learn from your experiences.

Thanks Ellie. I hope you enjoy the Tirgearr family as much as I do.
Thanks for stopping by.