We welcome Jan Ellis to the blog to tell us about her trip to London for the Romantic Novelists' Association Summer Party.

'Looking at the brightly lit entrance of the Royal Over-Seas League in London's smart St James's, her knees almost buckled with nerves. Clutching her ticket to her bosom she took a deep breath and stepped inside . . . '

Yes, dear reader, that was me one year ago at my first RNA Summer Party. Taking that initial step 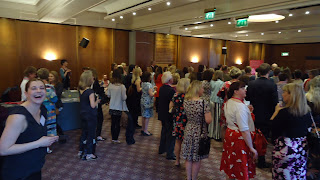 was pretty daunting: would I recognise anybody? Would anyone talk to me or would I end up weeping quietly behind a pillar? Most important of all: would there be any food?

As it turned out, I needn't have worried. I was amazed by how many people I already 'knew', having met and chatted to them on social media. Those kind people – in particular Karen Aldous and Samantha Tonge – then introduced me to their friends and I was off! And yes, there was excellent food, including mini fish and chips and perfect scones with jam and cream, which were definitely worth getting fat for. 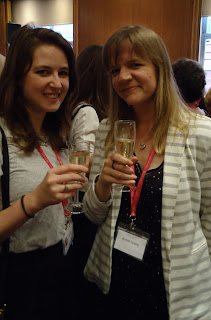 Emboldened by the success of party number one, I decided to give number two a whirl and had a great time yet again at the winter event in November. Last week I attended my second Summer Party. This year I was also able to attend the AGM, which gave me a better sense of how hard working and professional members of the RNA committee are. Chairwoman Eileen Ramsey took us through the highlights of the previous twelve months, including the ROMNA Awards. Treasurer Gill Stewart presented the accounts and was pleased to note that the organisation is in excellent financial health.
After the short meeting, a number of us helped Elaine Everest and the team to put out the names badges until we were herded out of the room by paparazzi keen to get shots of the nominees for the big award of the evening. As there was a gap then until the party began, I wandered down to the elegant terrace bar and joined Wendy Clarke, Susan Griffin and Merryn Allingham for a pre-party drink. Duly refreshed, we then headed up to the splendid Hall of India and Pakistan where 180 RNA members were gathering in their best frocks and fabulous shoes. The men may be few in number, but they all scrub up well and join in gamely with the gals.

The main event of the evening was the presentation of the Joan Hessayon Award, which went to 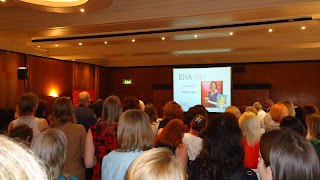 Clare Harvey for her wartime novel The Gunner Girl (Simon & Schuster UK). In her heart-felt acceptance speech, Clare said she wished to share the prize with her anonymous RNA reader to whom she owed so much.

Once the presentations had been made, everyone got on with the serious business of eating canapes and chatting. I was delighted to catch up with some of the great people I've met thanks to the RNA including Anita Chapman, Carol Cooper, Carrie Elks, John Jackson, Alison Knight, Holly Martin, Annie Peters (Annie Lyons), Julie Vince and others too numerous to mention. 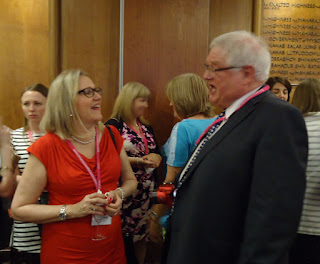 If there are RNA members out there wondering whether it's worth attending one of the parties, my advice is do it! You'll discover a whole bunch of clever, supportive writers just waiting to be your friends.

Finally, I'd like to thank party-organiser extraordinaire Tracy Hartshorn (Sally Quilford) who was sadly unable to attend the event. She was much missed and we all look forward to seeing her again in the future.

Jan Ellis began writing fiction by accident in 2013. Until then, she had led a blameless life as a publisher, editor and historian of early modern Spain. She fell into fiction when a digital publisher approached her to write a history book, then made the mistake of mentioning women’s fiction, which sounded much more fun. She is proud to be a member of the Romantic Novelists’ Association.

Thank you for covering the event so splendidly for the RNA blog, Jan. We are in awe of anyone who can juggle a notepad and pen as well as a glass of wine!

If you would like to cover an event for the RNA blog please contact us on elaineeverest@aol.com

Thank you for writing about the Summer Party, Jan. xx

Thanks for inviting me!

Really enjoyed this blog, Jan; beautifully put together! It was great to see you, however briefly at the party. Really must get together again soon. Fabulous night all around.

Great write-up, Jan, and it was lovely to see you! (and thanks for the mention :-))

Lovely post and made me feel I was there even though I was being Cinderella over in Nashville!

The manager at this place suggested we make custom choices and make the menu a little more personalized. The next time you need to hold a conference, have a wedding, or set up a whiskey tasting, think about doing it at Chicago venues here.