FOCUS ON: The Scottish Chapter

We welcome Jean Fullerton with this month's Focus on RNA Chapters 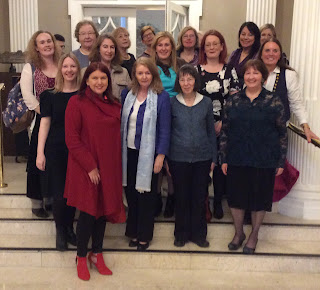 I’m delighted to report that the inaugural meeting of the Scottish Chapter took place on Saturday 12th November, in the sumptuous surroundings of the Balmoral Hotel, Edinburgh; the very location where JK Rowling finished her final Harry Potter novel. The excitement was palpable as friends old and new came together to chat, celebrate and to enjoy afternoon tea.


And what a showstopper of a tea it was! Champagne was quaffed and as well as sandwiches and scones (no self-respecting Scottish get-together would be without scones) we were treated to crispy haggis bonbons, miniature ginger muffins, decadent chocolate tartlets and a strawberry mousse profiterole delicious enough to make any romantic novelist swoon!

Members travelled from as far afield as Aberdeen in the North-East and Dumfries in the South-West of the country. Special thanks go to Jean Fullerton, Chapter Liaison, who went beyond the call of duty, travelling from London to share in our happy day. All train journeys were particularly memorable as Scotland were playing rugby at Murrayfield and although this made travelling busy, members were in agreement that swarms of men in kilts simply added a certain frisson to the day.


As a harpist created a relaxing atmosphere, published novelists, short story writers and New Writers’ Scheme members spent time getting to know one another better.


Consensus was reached that given the travelling distances required, the group will meet twice yearly, perhaps alternating between Edinburgh and Glasgow, with two smaller meetings - one in the East, the other in the West of Scotland – arranged on a more regular basis. Plans are already progressing for our next joint meeting, when it is hoped a Literature Officer from Creative Scotland will give a talk on the funding schemes available to writers, to enable them to progress their practice. New members are very much welcome, with further information available on our RNA Scottish Chapter Facebook page.


After polishing off afternoon tea, most members were keen to nab a seat on their train home, before men in kilts beat them to it! However, a small intrepid gang burnt off several hundred calories by climbing the steps to the Royal Mile, where they enjoyed a visit to the Writers’ Museum, which celebrates the lives of Robert Burns, Sir Walter Scott and Robert Louis Stevenson. An appropriate end to the day for the Scottish Chapter.


Special thanks go to Rosemary Gemmell, organiser extraordinaire, whose inspired suggestion of champagne afternoon tea was the perfect way to celebrate our first get-together, to Susan Bergen for arranging the tour of the Writers’ Museum and, finally, to our Chairman, Eileen Ramsay, for her elegant presence on such an exciting occasion.


Our first meeting created many wonderful memories but the most special for me was when one of the young waitresses took time to share that, being an avid reader, she was thrilled to be serving a gathering of writers – a first for her, as far as she knew. She went on to say she thought writers were very special people. I’ll raise a toast to that. Here’s to our next meeting… haste ye back!


(For more details on how to join the Scottish Chapter please contact either Rosemary Gemmell on ros_gemmell@hotmail.com or Rae Cowie on raecowie1@gmail.com )

*
Thank you so much, Rae, for your report on the Scottish Chapter's first meeting. It was a wonderful day!

Jean was born in East End of London and spent all her career as a district nurse in East London but is now a full-time writer. Wedding Bells for Nurse Connie, is her current release. Her next novel Pocketful of Dreams, set in the turbulent years of WW2, is due for release in June 2017 and is the first in next East London series.
Her first series with Orion Fiction was set in the Victorian period after which she jumped forward to post-war East London.
She is a proud graduate from the NWS and passionate about the local chapters, which is why she has taken on the role of Chapters Liaison.

Well done for writing that up, Rae. Although I missed the start, it was lovely to drop in and find such a happy, chatty bunch of people! It was good to meet new members as well - hope we do manage to keep this going. Special thanks to Jean for trekking north, and to Rosemary for organising the whole thing.

Lovely report, Rae. It brought the whole fabulous day back.

What a lovely report, Rae, thank you for sharing x