Carole Blake is no longer with us.  None of us expected to read those words.  Carole was just always there and everyone one of us was so glad to see her.  Something about her exuberance and solidity, her enthusiastic welcoming of the challenges of the world of books lifted all our hearts.   Now she is gone and so many of us who have known her for so long and benefitted from her warmth, acuity and 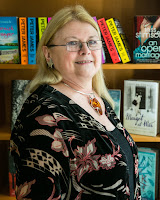 sense of fun will feel a terrible gap.

Carole’s relationship with the Romantic Novelist’s Association summed up many of her qualities.  The organisation in a very practical and pragmatic way has as a top priority helping writers, including those on the stepladder to publication; make a success of their careers in their chosen field.

The New Writer’s Scheme is I believe a unique author-to-author mentoring scheme that has been running for years – long before the term mentoring was current parlance.  Carole applauded that practicality and pragmatism and was an enthusiastic member and supporter of the Society for many years. I remember her wearing hats to the grand lunches in The Dorchester or Hilton thirty years ago. She embraced the way the association helped authors as well as its collegiate fun.   She attended conferences, parties and sat on panels and   put her shoulder to the wheel on occasions too frequent to mention.

In 2014 the Romantic Novelist’s Association recognised Carole's outstanding contribution by making her an Associate Vice-President. The RNA as an association has lost a true friend and tirelessly energetic supporter who was herself at the peak of success in the publishing industry. We will all feel her loss.

Below are tributes from just a few of the members.

I first met Carole at the Cheltenham conference in 2001. I remember being amazed that such a high profile agent should be such fun with us all.  We had serious conversations about men and shoes.  She felt the fact I’d only brought 4 pairs with me meant I wasn’t a serious shoe-lover.
Katie Fforde – President RNA

I met Carole about twenty years ago when I chaired her at the Edinburgh Book Festival. We became and remained friends. She has always been a staunch supporter of the RNA and its members, encouraging and inspirational to us all, and we will miss her terribly.
Eileen Ramsay – RNA Chairman

As with everything, Carole Blake joined in enthusiastically with the RNA Conference for many years and thoroughly enjoyed spending the full long weekend in the company of writers. She was always willing to impart her immense industry knowledge by leading and participating in panels, and she frequently


delivered her own talks too. From ‘How to Pitch’ to ‘What Agents Want’ to ‘Working Together’ (with Elizabeth Chadwick), all were eye-opening, but the one I will always remember as being typically Carole was at Sheffield in 2013. The air conditioning had broken down, a heat wave was compressing everyone into limp rags, the bar wouldn’t be open for another couple of hours, so she efficiently assembled her audience and marched them outside to deliver her session (on ‘50 Years in Publishing’) on the steps. Formidable, energetic, irreplaceable.
Jan Jones – Conference Organiser

Carole always rocked up in fabulous jewelry and a killer pair of shoes. She had almost four hundred pairs, and was very organised about how she “filed” them.
Actually I don’t think I ever saw her arrive - she was always there already, in the middle of a smiling group, exuding joie de vivre and with a glass in her hand - she was the one to stick to if you wanted to make sure yours wasn’t empty - I’ve been to dozens of the same book launches, parties, award ceremonies with Carole and she was always adept at making sure our drinks kept coming. She was always kind and charming when would-be authors approached her with their pitches - which they did often - although she had a “look” I teased her about if anyone pushed too far beyond the boundaries of good manners. I put a clip of it, taken from a TV pilot we made together, up on YouTube when she was celebrating fifty years in publishing and she did laugh.


Jane Wenham-Jones – Friend and presenter of many RNA events

Very sad, but oddly lovely to read the tributes to Carole. She will definitely be very missed, but what an amazing impact she has had on us all - even those who were just Facebook pals. Lovely lady.

Never mind will be missed - she already is, by so many of us.

I am not a member of the RNA but may I comment too? I never physically met Carole - although she insisted that we were going to meet when I finally got back to London and that she was going to insist on some "new experiences" for me. I don't know where she found the time but she always read my blog - almost from the time I started writing it. It still stuns me that this busy, hardworking person who had so many demands on her time could find the time for something like that - and not just the time to read it but to send me comments, often short and private but always pertinent. I am with Lol Barnes. I miss her now.

At a Historical Novel Society Conference, I sat next to Carole Blake during lunch. When I asked her why she became a publisher,she replied: "Because I couldn't write publishable fiction." Her honesty impressed me and so did her posts on Face Book. No more photos of her dolls' house and those exquisite miniature books, no more photos of sunrises and sunsets taken from the window of her flat. So much more I already miss. I appreciated her responses to my comments on her posts, and am still amazed that she found time to keep in touch with me.