Sarah Duncan tells tales of hangovers and talks...
My first book had been published in the summer of 2004, and I'd been invited to be a speaker at the RNA conference.  I'd not been before so had little idea of what to expect, but everyone was incredibly friendly.  Too friendly.  I have a vague recollection of Mandy Grange topping up my glass in the bar at about two in the morning. I think I got to bed at four.  None of this would have mattered if my talk hadn't been at nine the next morning.
I struggled out of bed feeling - oh, beyond dreadful.  You know, that sensation that your skin is sliding off your face into a grey-green puddle on the floor. That bad. I couldn't give a talk.  I had to give a talk.
I remember sitting on a chair because I thought I'd fall over if I stood.  I can remember looking at Jenny Haddon sitting in the front of the audience and thinking I was about to throw up over the RNA chair.  Which would have been memorable, to say the least.
But what I remember most is hearing Julie Cohen's talk in the next door room.  It sounded as if it was going really, really well.  I discovered afterwards she'd brought in a life-size cardboard cut-out of Hugh Jackman which seemed an unfair advantage.
I'm speaking again at this conference.  I've got the nine o'clock spot again.  And in the next room will be...Julie Cohen. But this time I'm ready.  She may have Hugh Jackman, but I've got magic publishing pixie dust and I won't be hungover.  Much... 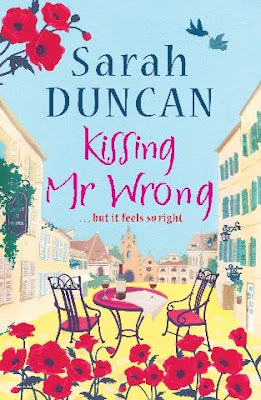 Was it Leicester? I seem to remember sitting opposite you at lunch. And Katie not feeling terribly well, either...

It was Leicester - and I would never have guessed you were under the weather, Sarah. Terrific stuff about writing a synopsis and somehow, in the middle of your talk I understood what my own wip was about, so that was especially great.

Yes, it was Leicester, because that was my first conference, too. (Julie had strawberries and chocolate there, too. She knows how to make her audience happy.)

And I also remember how gorgeous your hair was, and how you looked utterly glamorous. I can't believe you had a hangover at the time - it didn't show!

I never had Hugh Jackman there! It was all the force of my personality, I swear!

(Or maybe the strawberries and chocolate.)

I really wanted to come to your talk in 2004, and now I won't be able to come to this one, either. But we can have a competition about who's the most hung over. :-)

Thank you kind people for not noticing my hungover state, I think the years must have placed a misty film over your memories.

Liz - I'm awestruck to think I helped with your wip.

I was obviously hallucinating about Hugh Jackman, and that's even worse. But no wonder there were roars of approval as Julie had strawberries and chocolate. The magic publishing pixie dust will have to stretch a long way to compete with that. And the shoes...