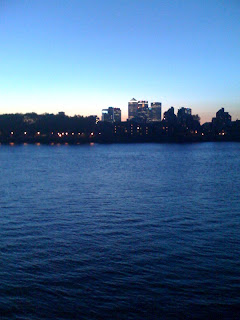 So, here we are finally after all that planning and packing. Greenwich and the Old Royal naval College must be the best location ever for a conference and it's fitting that we should be here for the 50th anniversary celebrations of the RNA. Why is it so fabulous? First of all there's the journey here. Those of us with delusions of grandeur could have travelled by boat like Cleopatra. Wafting down the Thames in a stately manner to Greenwich's pier you could easily imagine you were on the Nile in Egypt because temperatures here have soared to 30 degrees, the sun is relentless and it is hot, hot, hot! For the historical writers amongst us arriving by river is a fabulous journey affording views of the little pebbly beaches along the Thames where fans of metal detecting often find fragments of chain mail and ancient coins.
For most of us though we arrived at Greenwich by underground as I did. Changing at Canary Wharf was a real revelation. I'm a Londoner born and bred but it is years since I have been to Canary Wharf and I was last there while it was still under construction. Now fully fledged it looks for all the world like the financial district in New York. Modern, striking and teeming with smartly suited and booted commuters. If we don't quite have skyscrapers we do have the tower at Canary Wharf with its distinctive pyramid top. As you walk past the coffee shops in the concrete piazzas to the Docklands Light Railway, bright red electronic lights dance around the top of the buildings proclaiming today's share prices. All very whizzy and high tech. I resisted the urge to stop for an iced tea - did I mention it's hot, hot, hot here?
Then, when you reach Greenwich itself, you are catapulted from the very modern back into the past. MPs used to journey down in barges during the whitebait season to feast at the Trafalgar Tavern on the little fishes caught freshly from Thames then fried in batter. We feasted there last night at our gala dinner in cocktail and evening dresses, fanning ourselves and dripping delicately in the sweltering temperatures - did I mention it is hot, hot, hot? As we sat under the huge chandeliers, portraits of great naval heroes like Nelson and Hardy gazed down on us (oops, I am told 'gazed' is an overused word in our world of Mills and Boon and chicklit)...Correction. Nelson and Hardy peered sternly down at us, looking for all the world like the alpha males they were. As we looked across the Thames to the modern city beyond, and we gently melted in the heat I couldn't help smiling to think that we may well have been sitting in one of the rooms where Dickens took  friends to dine. Copious amounts of alcohol were drunk, after all we had to stay hydrated in these unreal temperatures. 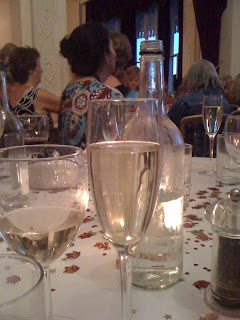 Finally there is Queen Anne Court, stately, grand buildings shimmering whitely in the heat where, as you walk to the conference sessions across the brown baked grass, snippets of divine music filter out as the students practice. Greenwich is the perfect location, for the perfect anniversary of our perfect Association. Oh, and did I mention it is hot, hot........?
Cara's latest book is LEAVING HOME
Ulverscroft
July 2010

'Flora Canning's bags are packed for her new life in New York, but a family tragedy leaves her with her sister's baby, and a mysterious stranger Nate Campbell who has his own reasons for wanting a relationship with Flora and the new baby.'